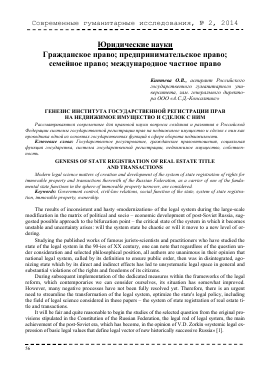 Modern legal science matters of creation and development of the system of state registration of rights for immovable property and transactions therewith of the Russian Federation, as a carrier of one of the fundamental state functions in the sphere of immovable property turnover, are considered.

The results of inconsistent and hasty «modernization» of the legal system during the large-scale modification in the matrix of political and socio - economic development of post-Soviet Russia, suggested possible approach to the bifurcation point - the critical state of the system in which it becomes unstable and uncertainty arises: will the system state be chaotic or will it move to a new level of ordering.

Studying the published works of famous jurists-scientists and practitioners who have studied the state of the legal system in the 90-ies of XX century, one can note that regardless of the question under consideration and selected philosophical position, all authors are unanimous in their opinion that national legal system, called by its definition to ensure public order, then was in disintegrated, agonizing state which by its direct and indirect effects has led to unsystematic legal space in general and substantial violations of the rights and freedoms of its citizens.

During subsequent implementation of the dedicated measures within the frameworks of the legal reform, which contemporaries we can consider ourselves, its situation has somewhat improved. However, many negative processes have not been fully resolved yet. Therefore, there is an urgent need to streamline the transformation of the legal system, optimize the state's legal policy, including the field of legal science considered in these papers - the system of state registration of real estate title and transactions.

It will be fair and quite reasonable to begin the studies of the selected question from the original provisions stipulated in the Constitution of the Russian Federation, the legal rod of legal system, the main achievement of the post-Soviet era, which has become, in the opinion of V.D. Zorkin «systemic legal expression of basic legal values that define legal vector of new historically successive Russia» [1].

Note that hardly someone doubts that the «attitude of the state towards the right of a person on his property, i.e. private property, is the key to understanding of socio-economic essence of power, entire complex of constitutional and other rights» [2]. Property right is the basis of the entire civil and private law, it is a fundamental and inalienable human right. And in accordance with the principle of the inviolability of property, civil rights provisions provide the owners with the possibility of stable execution of their powers to possess, use and dispose of their property. Thus, in accordance with cl. 1 art. 35 of the Constitution of the Russian Federation, the right to private property is protected by law. Many agree that in these terms, the legislator means civil, administrative, criminal, judicial and other protection measures. At the same time, considering entire norms of cl. 2 art. 8, cl. 1 art. 35 and cl. 1 art. 45 of the Constitution of the Russian Federation, we come to the conclusion that the protection of private property rights is a phenomenon of a higher order than its recognition and protection, but supposing the existence of the institutions of the state and civil society aimed on prevention of the property right protection of a particular person. According to some authors, and let's assume, the legislator's logic, we can consider a system of state registration of real estate titles and transactions as such an institution, rule-making beginning of formation of which is associated with the adoption of the Federal Law dd. 21.07.1997 N 122 -FZ «On state registration of real estate titles and transactions» (hereinafter referred to as «Law on state registration»). However, does the newly established system of state registration perform law enforcing, preventive and protective function assigned to it, does it display and justify this kind of expectations? Let's try to further formulate our own opinion on this subject matter, basing our position on the following theses and arguments.

It is not unknown that for unreasonably long period of time after the adoption of the Constitution, developed legislative base for the implementation of the rights stipulated therein, including the right to property, lacked completely, was created erratically and inconsistently, was modified repeatedly and unreasonably during subsequent years, and has not been perfect. Herein, the adoption of the new Civil Code, being reputedly economic constitution of the country, has largely simplified the task of the legal consciousness of overall strategy of the state and the combinations of tactical decisions regarding the definition of legal framework of the country's economic development.

Even just the very subject of civil law has undergone fundamental changes which inevitably led to a significant transformation of civil law, including its general provisions. Furthermore, inconsistent hierarchical system of legal acts established in a hasty manner for the development of new civil code, though partly codified the legislation, but has not brought clarity to the regulatory mechanisms of many segments of society's life, including the sphere of relations of the realization of real estate titles. Therewith, in attempt to keep up with the needs of legal regulation of real estate circulation, which is a dominant of functioning of any economic system, the legislator has not always managed to keep balance between «power» and «society» (some authors in their arguments use the terms «common purpose» or even «freedom» as the antithesis to the term «power» in this context ).

In this case, other vector of legal development novelled the sphere of real estate circulation by the formation of the institution of state registration real estate titles and transactions. Hereinafter, the term «institution» is used for convenience, and for our deep conviction, has nothing to do with often

used definition of legal institution given in the dictionaries and legal literature as «totality of law norms detached within a particular law field governing a group of related public relations». The institute of state registration is based «on a combination of mainly administrative legal and information regulation» [3], and has no bases and elementary preconditions for isolation in separate institution within legal science.

What is the state registration of real estate titles and transactions: emerging field of Russian law, complex legal institution, mixed institution, institute of administrative or civil law or procedural shell of just one of many state functions conferred by the society - it is debatable subject worthy of separate study. However, the impression is that the civil lawyers - scientists are still more cautious than the lawyers-officials. And the explanation of this can be found in the consideration of the relations governed by this institution.

For justice' sake, it should be recognized that given the entire wealth of legal knowledge and understandings in the field studied in this paper, as well as usi