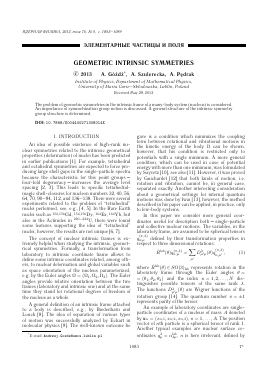 The problem of geometric symmetries in the intrinsic frame of a many-body system (nucleus) is considered. An importance of symmetrization group notion is discussed. A general structure of the intrinsic symmetry group structure is determined.

An idea of possible existence of high-rank nuclear symmetries related to the intrinsic geometrical properties (deformation) of nuclei has been predicted in earlier publications [1]. For example, tetrahedral and octahedral symmetries are expected to force producing large shell gaps in the single-particle spectra because the characteristic for this point groups — four-fold degeneracy — increases the average level spacing [2, 3]. This leads to specific tetrahedral-magic shell-closures for nucleon numbers 32, 40, 56, 64, 70, 90-94, 112, and 136-138. There were several experiments related to the problem of "tetrahedral" nuclei performed, see, e.g., [4, 5]. In the Rare Earth nuclei such as 152'156Gd,154'156Dy,164Er,164Yb, but also in the Actinides in 230-234U, there were found some features supporting the idea of "tetrahedral" nuclei, however, the results are not unique [6, 7].

The concept of nuclear intrinsic frames is extremely helpful when studying the intrinsic, geometrical symmetries. Formally, a transformation from laboratory to intrinsic coordinate frame allows to define some intrinsic coordinates related, among others, to nuclear deformation and global variables such as space orientation of the nucleus parameterized, e.g. by the Euler angles Q = Q2, Q3). The Euler angles provide relative orientation between the two frames (laboratory and intrinsic one) and at the same time they stand for rotational degrees of freedom of the nucleus as a whole.

A general definition of an intrinsic frame attached to a body is described, e.g., by Biedenharn and Louck [8]. The idea of separation of various types of motion was successfully analyzed by Eckart in molecular physics [9]. The well-known outcome he

gave is a condition which minimizes the coupling term between rotational and vibrational motions in the kinetic energy of the body. It can be shown, however, that his condition is restricted only to potentials with a single minimum. A more general condition, which can be used in case of potential energy with more than one minimum, was formulated by Sayvetz [ 10], see also [11]. However, it was proved by Guichardet [12] that both kinds of motion, i.e. rotation and vibration, cannot be, in general case, separated exactly. Another interesting consideration about a geometrical settings for internal quantum motions was done by Iwai [13], however, the method described in his paper can be applied, in practice, only to few-body systems.

In this paper we consider more general coordinates useful for description both — single-particle and collective nuclear motions. The variables, in the laboratory frame, are assumed to be spherical tensors

qrr,^ defined by their transformation properties in respect to three dimensional rotations:

An example of laboratory coordinates are single-particle coordinates of a nucleus of mass A denoted by Xn = (Xn;1,Xn;2,Xn;3), n = 1,...,A. The position vector of nth particle is a spherical tensor of rank 1. Another typical examples are nuclear surface coordinates q* = a1^, n is here irrelevant, defined by

the equation of the nuclear surface [15] expressed in spherical coordinates:

general case it is convenient to define the quadrupole-like tensor:

where the weights m,n'X > 0 are usually related to some "masses". The components of the tensor (7) are written, by definition, in the laboratory frame. The second-rank tensor can always be diagonalized. Diagonalization of this "quadrupole" tensor leads

to new components Qff2 [15]. The diagonalization

defines not only the intrinsic components Qf2 of this tensor but a kind of principal axes frame, too. This intrinsic frame is obtained by rotation of the laboratory frame through the Euler angles Q determined by:

The metric tensor in the manifold Xlab spanned by the

variables {qi^f2} is assumed to be proportional to the Clebsch—Gordan coefficients of the S0(3)lab group:

Transformation to the intrinsic frame is done by an appropriate rotation of the laboratory variables q^^2 to get intrinsic variables an,/?2:

with the additional conditions which define, first of all, the Euler angles:

where for simplicity a = {a^f2} represents the

whole set of variables a^f2. The same notation we

use for the laboratory variables q = {qnf 2 }. The variables (a, Q) create a manifold denoted here by X.

The number of additional conditions (6) depends on a physical problem, but it is not smaller than 3, i.e. r > 3. For example, the intrinsic frame attached to a body, e.g. the principal axes frame, is usually defined making use of a quadrupole operator. In this more

The transformation formula to intrinsic frame (5) can be directly applied to the quadrupole tensor (7). It gives the following relation:

The intrinsic components of the quadrupole tensor are dependent only on a — they are independent of orientation of nucleus. It implies an important property

of the intrinsic variables a^f2, they are invariant in respect to the laboratory rotations Rlab(9) e S0(3)lab. Formally, the right-hand side of the Eq. (5) is invariant under the operation: qn'X2 — Rilah(d)qn'X2 and at the same time DA(Q) — Rlab(0)DA(Q) = = DX(9-1Q). It is the most important physical property of an intrinsic frame that intrinsic rotations are independent of laboratory rotations — they commute. It means that rotations in respect to the laboratory frame Rlab(w) e S0(3)lab - S0(3), the symbol "-" read isomorphic, do not touch the intrinsic variables

a^f2. The laboratory rotations act only on the Euler angles Q representing relative orientation between the intrinsic and the laboratory frames:

For each element g of a group G, one can define a corresponding operator g in the group linear space CG (a vector space spanned by the formal sums geG P(g)g> where /3(g) are complex or real coefficients) as:

The group G formed by the collection of the operators g is called the intrinsic group of the group G. The groups G and G are anti-isomorphic. The anti-isomorphism is given by:

The most important relation between "normal" and corresponding "intrinsic" group is, as expected, commutation of operations belonging to both groups:

In applications, there is usually a problem of definition of the intrinsic group action onto intrinsic variables other than those coming from the group manifold. Because of tensor structure of our intrinsic variables this problem can be solved easily for the most important case of the group S"0(3)int - SO(3)a x SO(3)n "rotating" both a and Q variables independently, as defined below. The indices a and Q show the variables which are af