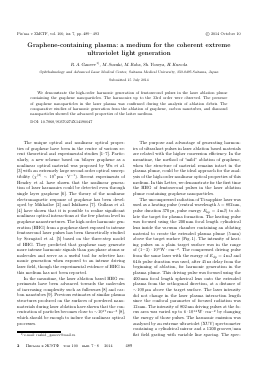 Graphene-containing plasma: a medium for the coherent extreme

We demonstrate the high-order harmonic generation of femtosecond pulses in the laser ablation plume containing the graphene nanoparticles. The harmonics up to the 33rd order were observed. The presence of graphene nanoparticles in the laser plasma was confirmed during the analysis of ablation debris. The comparative studies of harmonic generation from the ablation of graphene, carbon nanotubes, and diamond nanoparticles showed the advanced properties of the latter medium.

The unique optical and nonlinear optical properties of graphene have been in the centre of various recent theoretical and experimental studies [1-7]. Particularly, a new scheme based on bilayer graphene clS cl nonlinear optical material was proposed by Wu et al.

[3] with an extremely large second-order optical susceptibility (x^ ~ 105 pm • V-1). Recent experiments of Hendry et al. have shown that the nonlinear generation of laser harmonics could be detected even through single layer graphene [6]. The theory of the nonlinear electromagnetic response of graphene has been developed by Mikhailov [2] and Ishikawa [7]. Gullans et al.

[4] have shown that it is possible to realize significant nonlinear optical interactions at the few photon level in graphene nanostructures. The high-order harmonic generation (HHG) from a graphene sheet exposed to intense femtosecond laser pulses has been theoretically studied by S0rngard et al. [5] based on the three-step model of HHG. They predicted that graphene may generate more intense harmonic signals than gas-phase atoms or molecules and serve as a useful tool for selective harmonic generation when exposed to an intense driving laser field, though the experimental evidence of HHG in this medium has not been reported.

In the meantime, the laser ablation based HHG experiments have been advanced towards the molecules of increasing complexity such as fullerenes [8] and carbon nanotubes [9]. Previous estimates of similar plasma structures produced on the surfaces of powdered nano-materials during laser ablation have shown that the concentration of particles becomes close to ~ 1017 cm~3 [8], which should be enough to induce the nonlinear optical processes.

The purpose and advantage of generating harmonics of ultrashort pulses in laser ablation based materials are related with the higher conversion efficiency. In the meantime, the method of "mild" ablation of graphene, when the structure of material remains intact in the plasma plume, could be the ideal approach for the analysis of the high-order nonlinear optical properties of this medium. In this Letter, we demonstrate for the first time the HHG of femtosecond pulses in the laser ablation plume containing graphene nanoparticles.

The uncompressed radiation of Ti:sapphire laser was used as a heating pulse (central wavelength A = 802 nm, pulse duration 370 ps, pulse energy = 4mJ) to ablate the target for plasma formation. The heating pulse was focused using the 200 mm focal length cylindrical lens inside the vacuum chamber containing an ablating material to create the extended plasma plume (5 mm) above the target surface (Fig. 1). The intensity of heating pulses on a plain target surface was in the range of (1—3) • 109 W • cm~2. The compressed driving pulse from the same laser with the energy of = 4 mJ and 64 fs pulse duration was used, after 45 ns delay from the beginning of ablation, for harmonic generation in the plasma plume. This driving pulse was focused using the 400 mm focal length spherical lens onto the extended plasma from the orthogonal direction, at a distance of ~ 100 /um above the target surface. The laser intensity did not change in the laser plasma interaction length since the confocal parameter of focused radiation was 12 mm. The intensity of 802 nm driving pulses at the focus area was varied up to 6 • 1014 W • cm~2 by changing the energy of those pulses. The harmonic emission was analyzed by an extreme ultraviolet (XUV) spectrometer containing a cylindrical mirror and a 1200grooves/mm flat field grating with variable line spacing. The spec-

trum was recorded by a micro-channel plate detector with the phosphor screen, which was imaged onto a CCD camera.

We studied graphene nanoparticle powder (Sky Spring Nanomaterials Inc.) as the ablating target. To compare the yield of harmonics from cluster-contained and monoparticle-contained plasmas the carbon nanotube (CNT) powder, diamond nanoparticle (DN) powder, and 5-mm-long bulk graphite and bulk silver were used as the targets as well. The powders of above materials were glued on the 5-mm-long glass plates and were installed in the vacuum chamber for ablation. The application of above powdered targets enabled the observation of harmonic generation along a longer wavelength range of XUY (25-80 nm; llth-33rd harmonics of the 802 nm radiation).

Graphene nanopowders are very thin (5-10 nm in thickness) flat particles with quite large diameters. Like other nanoparticles, the small size gives rise to certain handling issues. In the case of graphene nanoparticles, the ablation plasma plume may contain various species of carbon, i.e. neutrals and ions, small molecules, small and large clusters, aggregates, etc., which can contribute to harmonic generation in various extents. It is important to determine their presence in the region where the driving laser beam interacts with the expanding plasma. Our morphological TEM studies confirmed the presence of relatively large multi-plate graphene species deposited on the nearby substrates at the conditions of the optimal ablation using the 370-ps pulses. Thus, the possible components in the laser heated graphene plume, at 45 ns after laser ablation, when the driving laser pulse interacts with plume, could be the large sheets of fullerenes. We were able observing the monolayer, bi-

layer, trilayer, etc. nanosized chunks depending on the conditions of ablation. However, some uncertainty still remains about the correlation of the presence of different graphene nanoparticles in the carbon plasma and their influence on the nonlinear optical response of medium during harmonic generation. Notice that the time-offlight mass spectrometry studies of graphene ablated at the conditions similar to those used for HHG showed the presence of small clusters of carbon (C2-C4). We did not observe other ionized clusters, though searched along the wide area of mass-charge units.

Powdered targets are difficult to keep intact for a long time during their continuous ablation. Our studies of the decay of harmonic yield from the graphene plasma were performed at 10 Hz pulse repetition rate, without the movement of target from shot to shot. This led to deterioration of the optimal plasma formation after a few hundred shots on the same place of graphene-contained target. This effect was reported during previous HHG studies using the powdered target ablation [10] and is attributed to the modification of target surface (i.e. evaporation of powder, melting of heated area, modification of surface properties, etc.). To keep stable harmonic yield, one has to move up and down the target holder. Contrary to that, in the case of bulk graphite ablation, the stable harmonic generation was lasted for a considerably longer time. Previous method to hold the stable harmonic emission from plasma was based on the rotation of target (cylindrical rod) and the ablation of its surface using the narrow heating beam [11]. In our case, this method was unacceptable since we used the plain graphene contained target to create the extended graphene plasma. Since the harmonic yield at a given spot on the target became weaker after hundreds

Graphene-containing plasma: a medium for the coherent extreme...

of laser shots, this effect was taken into account during the optimization of laser ablation for HHG.

The majority of previous plasma harmonic studies were carried out using the short length plasma plumes (I < 0.5 mm). One could expect that the application of longer plasmas would enhance the conversion efficiency due to the quadratic dependence of the nonlinear optical response of the medium on the length of laser-matter interaction. To achieve higher HHG conversion efficiency, the length of the medium might be increased provided the phase mismatch between the laser field and the harmonic radiation maintains low. However, once the medium sizes exceed the coherence length, the harmonic intensity will be saturated due to phase mismatch. To analyze this process in the laser-produced plasmas one has to carefully define the best conditions of plasma HHG in the extended medium, while taking into account the peculiar properties of the material used for laser ablation.

The comparative studies of 0.5-mm-l