научная статья по теме GROWTH OF PBS NANOPARTICLES AND NANORODS THROUGH A SIMPLE SYNTHETIC ROUTE: A MECHANISTIC STUDY OF THE THIOGLYCEROL-CATALYZED HYDROLYSIS OF THIOSULFATE Химия 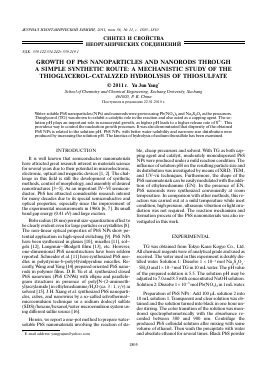 Текст научной статьи на тему «GROWTH OF PBS NANOPARTICLES AND NANORODS THROUGH A SIMPLE SYNTHETIC ROUTE: A MECHANISTIC STUDY OF THE THIOGLYCEROL-CATALYZED HYDROLYSIS OF THIOSULFATE»

GROWTH OF PbS NANOPARTICLES AND NANORODS THROUGH A SIMPLE SYNTHETIC ROUTE: A MECHANISTIC STUDY OF THE THIOGLYCEROL-CATALYZED HYDROLYSIS OF THIOSULFATE

Water-soluble PbS nanoparticles (NPs) and nanorods were grown using Pb(NO3)2 and Na2S2O3 as the precursors. Thioglycerol (TG) was shown to exhibit a catalytic role in the reaction and also acted as a capping agent. The solution pH plays an important role in nanocrystal growth, as higher pH leads to a higher release rate of S2-. This provides a way to control the nucleation growth processes. It was also demonstrated that dispersity of the obtained PbS NPs is related to the solution pH. PbS NPs. with better water-solubility and narrower size distribution were produced by increasing the solution pH. The kinetics of hydrolysis of sodium thiosulfate has been examined.

It is well known that semiconductor nanomaterials have attracted great research interest in materials science for several years due to their potential in microelectronic, electronic, optical and magnetic devices [1, 2]. The challenge in this field is still the development of synthetic methods, control of morphology, and assembly of desired nanostructures [3—5]. As an important IV—VI semiconductor, PbS has attracted considerable research interest for many decades due to its special semiconductive and optical properties, especially since the improvement of the experimental measurements in 1960s [6, 7]. Its small band gap energy (0.41 eV) and large exciton.

Herein, we report a one-pot method to prepare water-soluble PbS nanomaterials involving the reaction of sta-

ble, cheap precursors and solvent. With TG as both capping agent and catalyst, moderately monodispersed PbS NPs were produced under a mild reaction condition. The influence of solution pH on the resulting particle size and its distribution was investigated by means ofXRD, TEM, and UV-vis techniques. Furthermore, the shape of the PbS nanomaterials can be easily modulated with the addition of ethylenediamine (EN). In the presence of EN, PbS nanorods were synthesized conveniently at room temperature. In comparison with other methods, this reaction was carried out at a mild temperature while inert condition, high pressure, ultrasonic vibration or light irradiation was not required. The reaction mechanism and formation process of the PbS nanomaterials was also investigated in this work.

Preparation of PbS NPs : Add 100 ^L solution 2 into 10 mL solution 1. Transparent and clear solution was obtained and the solution turned into black in one hour under stirring. The color transition of the solution was monitored spectrophotometrically with the absorbance recorded between 300 and 900 nm. Centrifuge the produced PbS colloidal solution after mixing with same volume of ethanol. Then wash the precipitate with water and absolute ethanol for several times. Black PbS powder

was obtained after drying in vacuum oven at room temperature for 12 h.

TEM experiments were carried out employing JOEL 100CX transmission electron microscope (TEM), using an accelerating voltage of 100 kV The samples used for TEM were prepared by dispersing some products in etha-nol followed by ultrasonic vibration for 15 min.

Growing in the liquid phase or colloidal precipitation, the NPs comprise an inorganic core over-coated with a layer of organic ligand molecules. The organic capping provides electronic and chemical passivation of surface dangling bonds, prevents uncontrolled growth and agglomeration of the NPs, and allows NPs to be chemically manipulated like large molecules with solubility and reactivity determined by the identity ofthe surface ligand. Re-

GROWTH OF PbS NANOPARTICLES AND NANORODS

cently, TG has been introduced to synthesize various metal sulfides as the capping agent of ZnS [17], CdS [18, 19], ZnSe [20], HgTe [21] NPs. In this experiment, PbS nano-materials have been synthesized via an TG-catalyzed

method in a mixed alkaline solution of Pb(NO3)2 and

S2 O3 . TG is not only the capping agent but also the cat-

alyst, which remarkably improve the hydrolysis of S2 O3 in the synthesis of PbS NPs.

There has been an upsurge of interest in the hydrolysis mechanism of thiosulfate and selenosulfate in the last decade or so and this is mainly, though not entirely, because of their many potential and proven uses in material chemistry. In the current work, we have studied, particularly in alkaline media, the hydrolysis of thiosulfate. It is well

ion, which reacts with Pb2+ to produce lead sulfide. However, in a system containing only Pb(NO3)2, sodium thio-sulfate and water, the hydrolysis of thiosulfate is a very slow process at ambient conditions. It takes about ten days to produce black PbS in the solution of Pb(NO3)2 and Na2S2CO3 at room temperature and ambient pressure. It was found out that, with the catalysis of TG, Pb2+ could react easily with thiosulfate under ambient conditions. In an alkaline system, with the catalysis of TG, it can be observed that the solution changed in color from colorless to black immediately. The appearance of the black color reveals the formation of PbS nanocrystals. In this experiment, we adopt the method of Ni et al. to ascertain the decomposition product of Na2S2CO3 [22]. After PbS was centrifuged off, ImL dilute mixed solution of Ba(NO3)2 and HNO3 was dropped into the system. A white precipitate was produced immediately, which indicated that

SOf ions were one of the hydrolysis products of Na2S2O3.

The catalytic effect of TG on the hydrolysis ofthiosul-fate has been thoroughly studied in our previous report [23—27]. The reactions can be written as follows:

As shown in Equations (1—3), the reaction scheme for producing fine and monodisperse PbS particles involves the following successive reactions: hydrolysis of the

S2 O3 under the catalysis of TG, nucleation of PbS, and growth of individual nuclei in the presence of a protective agent, TG. At the initial stage of the reaction, some of these Pb2+ and S2- ions are converted to nuclei and some are used for growing pre-existing nuclei. Eventually, particles with a larger size are obtained.

Our recent study also indicated that, under the catalysis ofTG, the rate ofthe hydrolysis ofthiosulfate increased as the solution pH increased. In an aqueous solution containing Na2S2O3, CuSO4 and TG the pH of the solution is 5.5, it took 2 h for the solution to change from transparent and colorless to black. Adjusting the solution pH to 7.0 by drop-wise addition of concentrated NaOH solution; the reaction rate was significantly increased. At pH 8.5, the solution changed from colorle