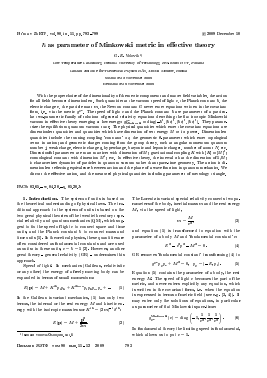 h as parameter of Minkowski metric in effective theory

With the proper choice of the dimensionality of the metric components and matter field variables, the action for all fields becomes dimensionless. Such quantities as the vacuum speed of light c, the Planck constant h, the electric charge e, the particle mass m, the Newton constant G never enter equations written in the covariant form, i.e., via the metric . The speed of light c and the Planck constant h are parameters of a particular two-parametric family of solutions of general relativity equations describing the flat isotropic Minkowski vacuum in effective theory emerging at low energy: «^Minkowski = dia,g(^h2, (he)2, (he)2, (he)2). They parametrize the equilibrium quantum vacuum state. The physical quantities which enter the covariant equations are dimensionless quantities and quantities which have dimension of rest energy M or its power. Dimensionless quantities include the running coupling 'constants' a;; the geometric ^-parameters which enter topological terms in action; and geometric charges coming from the group theory, such as angular momentum quantum number j, weak charge, electric charge q, hypercharge, baryonic and leptonic charges, number of atoms N, etc. Dimensionful parameters are mass matrices with dimension of M; gravitational coupling K with [if] = [M\~: cosmological constant with dimension M4; etc. In effective theory, the interval s has the dimension of 1/Af; it characterizes dynamics of particles in quantum vacuum rather than space-time geometry. The action is dimensionless reflecting equivalence between action and the phase of a wave function in quantum mechanics. We discuss the effective action, and the measured physical quantities including parameters of metrology triangle.

1. Introduction. The system of units is based on the theoretical understanding of physical laws. The traditional approach to the system of units is based on the two great physical theories of the twentieth century: special relativity and quantum mechanics (QM), which suggest to fix the speed of light c to connect space and time units, and the Planck constant % to connect mass and time units [1]. In theoretical physics, these quantities are often considered as fundamental constants and are used as units: in these units, c = % = 1 [2]. However, another great theory - general relativity (GR) - undermines this approach.

Speed of light. In mechanics (Galilean, relativistic or any other) the energy of a freely moving body can be expanded in terms of small momentum:

In the Galilean invariant mechanics, (1) has only two terms, the internal or the rest energy M and kinetic energy with the isotropic mass tensor K,k = (2m)^15th:

The Lorentz invariant special relativity connects two parameters of the body, inertial mass to and the rest energy M, via the speed of light,

and equation (1) is transformed to equation with the parameter of a body M and 'fundamental constant' c:

Equation (5) contains the parameter of a body, the rest energy M. The speed of light c becomes the part of the metric, and never enters explicitly any equation, which is written in the covariant form, i.e. when the equation is expressed in terms of metric field (see e.g. [3, 4]). It may enter only the solutions of equations, in particular as parameter of flat Minkowski space-time:

In fundamental theory the limiting speed is fundamental, which allows us to put c = 1.

In effective theory, the latter is problematic. For example, if the underlying microscopic system is anisotropic, the limiting speed of the low-energy excitations depends on the direction of propagation, and effective Minkowski space-time contains 3 parameters

Such anisotropy of the physical speed of light will be revealed only at high energy. For the internal low-energy observers, the world obeys Lorentz invariance and equivalence principle of GR. The measured limiting speed is coordinate independent, isotropic and universal for all species (at least in the Fermi-point scenario of emergent gravity [3]), if observers do not use "xylophones, yachts and zebras to measure intervals along the x, y and z axes" [5], but use the same xylophone in all directions. Since xylophones (rods and clocks) are made of anisotropic quasipaticles, the rescaling of measured distances automatically occurs leading to apparent isotropy and universality. Isotropy emerges in the low-energy limit, while for external high-energy observer the speed of light depends on coordinates and energy and becomes different for different species.

Thus in both cases, fundamental and emergent, the limiting speed c drops out of any equation written in the covariant form. For fundamental GR this is trivial since one may put c = 1. In effective GR even such notion as the fundamental speed is simply absent and its introduction is artificial. Let us now show that the same occurs with another fundamental constant H.

Planck constant H. It relates the frequency of emitted photon with the energy levels of atom:

For an extended body the relation between the invariant mass M and the non-covariant frequency is coordinate dependent due to gravitational red shift. This means that % can be measured either in the ideal limit of a point object, which is a mathematical construction (string theory for example deals with extended objects) or in Minkowski space-time. This suggests that % is another characteristic of Minkowski vacuum, which can be absorbed by metric together with c.

This is achieved if the quantity H, which traditionally is the prefactor in the quantum mechanical operator of momentum pM = is moved from pM to the metric

g^'mEq. (5). As a result, the isotropic Minkowski metric is characterized by two parameters, % and c, with % being the conformal factor of the Minkowski space-time:

Now when h is absorbed by the metric, it also does not enter any covariant equation. In particular, (8) becomes

With the choice of the dimensionality of the metric components in Eq. (9), the action becomes dimension-less, [S] = 1. An example is the dimensionless classical action for a freely moving massive particle:

A dimensionless S leads to a natural formulation of QM in terms of Feynman path integral with the integrand etS. For a single particle, S is the phase of semiclassical wave function, while (5) becomes

If gravity is fundamental and % is fundamental constant, the proposal to eliminate % from equations by hiding it into the metric (9) by scale transformation would be a formal mathematical trick only. Nothing prevents to use the scale factor larger or smaller than H, if it is accompanied by the rescaling of mass M. If all the equations are covariant, one may safely set с = % = 1.

If GR is effective and general covariance emerges only at low energy, then all 10 components of the metric become physical at higher energy, including the parameters с and H, entering the Minkowski metric of the equilibrium vacuum. They are not universal and together with the other parameters of the metric may explicitly enter the higher order terms in the action, for which the covariance as emergent phenomenon is not valid. As a results the ratio (Mm — Мп)/штп, which is universal in the low-energy range, will depend on frequency at high energy. This makes impossible setting % = 1.

In the <?-theory, quantum vacuum is characterized by the "charge" q [6]. In the equilibrium self-sustained state of the vacuum - Minkowski vacuum - the charge qo satisfies equation e(q)—qde/dq = 0, where e(q) is vacuum energy. In principle, the g-theory may fix particular Minkowski state with parameters c(qo) and %{qo).

Here we consider the lowest order terms in effective theory, and neglect the higher-order terms violating the emergent GR. We demonstrate that the choice (9) for Minkowski metric allows us to remove с and % from all the covariant equations without assumption that these quantities are universal. When с and % are inside the metric, the symmetry (gauge invariance, general covariance, etc.) does not prohibit the space-time dependence

of c and H. This is possibly the necessary step towards "quantum gravity", the microscopic theory in which c and % may and should depend on space-time. The extended version of this paper is in Ref. [7].

2. Effective action. Let us first discuss the effective action for the gauge fields and gravity as it appears, say, in the Fermi-point scenario [3], and rewrite it in such a way that % is hidden in the metric field. The main lesson is that in the low-energy corner, i.e. in the region of applicability of effective theory, the parameter % never enters explicitly.

Electromagnetic action. We choose the dimensions of the vector potential AM and field strength as they naturally follow from the geometric origin of the gauge field. Since AM arises as a result of localization of the dimensionless U( 1) field, —¥ Aone has:

The interaction of a classical particle with electromagnetic field is

Here q is the geometric charge of a p