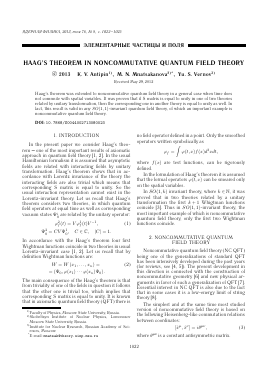 In the present paper we consider Haag's theorem — one of the most important results of axiomatic approach in quantum field theory [1, 2]. In the usual Hamiltonian formalism it is assumed that asymptotic fields are related with interacting fields by unitary transformation. Haag's theorem shows that in accordance with Lorentz invariance of the theory the interacting fields are also trivial which means that corresponding S matrix is equal to unity. So the usual interaction representation cannot exist in the Lorentz-invariant theory. Let us recall that Haag's theorem considers two theories, in which quantum field operators at equal time as well as corresponding vacuum states ^0 are related by the unitary operator:

no field operator defined in a point. Only the smoothed operators written symbolically as

The main consequence of the Haag's theorem is that from triviality of one of the fields in question it follows that the other one is trivial too, which implies that corresponding S matrix is equal to unity. It is known that in axiomatic quantum field theory (QFT) there is

where f (x) are test functions, can be rigorously defined.

In the formulation of Haag's theorem it is assumed that the formal operators p(t, x) can be smeared only on the spatial variables.

Noncommutative quantum field theory (NC QFT) being one of the generalizations of standard QFT has been intensively developed during the past years (for reviews, see [4, 5]). The present development in this direction is connected with the construction of noncommutative geometry [6] and new physical arguments in favor of such a generalization of QFT [7]. Essential interest in NC QFT is also due to the fact that in some cases it is a low-energy limit of string theory [8].

The simplest and at the same time most studied version of noncommutative field theory is based on the following Heisenberg-like commutation relations between coordinates:

It is very important that NC QFT can be also formulated in commutative space, if we replace the usual product of quantum field operators (strictly speaking, of the corresponding test functions) by the *- (Moyal-type) product [4, 5].

Let us remind that the *-product is defined as

Evidently the series in Eq. (4) has to be convergent.

Noncommutative theories defined by Heisenberg-like commutation relations (3) can be divided into two classes.

The first of them is the case of only space—space noncommutativity, that is 9°l = 0, time commutes with spatial coordinates.

It is known that this case is free from the problems with causality and unitarity [11 — 15] and in this case the main axiomatic results: CPT and spin-statistics theorems, Haag's theorem remains valid [16—19].

In the second case all coordinates, including time, are noncommuting.

Let us proceed to the Local Commutativity Condition (LCC) in noncommutative space—space QFT.

In the noncommutative case we have the similar condition with respect to commutative coordinates, thus now O1 — O2 means that

Let us recall that in NC QFT Lorentz invariance is broken up to SO(1,1) ® SO(2) symmetry [16]. As was already mentioned, in two SO(1,1)-invariant theories related by a unitary transformation, only two-point Wightman functions coincide.

In what follows we prove that if one of considered theories is trivial, that is the corresponding S matrix is equal to unity, then another is trivial too. To prove this in SO(1,1) invariant theory it is sufficient that the spectral condition, which implies non existence of tachyons, is valid only in respect with commutative coordinates that is

Also it is sufficient that translation invariance is valid only in respect with the commutative coordinates.

Let us point out that in case the spectral condition (7) and SO(1,1) symmetry are fulfilled, Wightman functions are analytical functions in two-dimensional analog of extended tubes [19].

The equality of two-point Wightman functions in two theories leads to the following conclusion: if local commutativity condition in respect with commutative coordinates is fulfilled and the current in one of the theories is equal to zero, then another current is zero as well.

If, for example, jj = 0, then in the space with positive metric

From the latter formula, corresponding analytical properties of Wightman functions, and local commu-tativity condition (5) it follows [2] that

Now let us consider the general case, when all coordinates, including time, do not commute. Let us stress that NC QFT in general case is 50(1,1)-invariant as well as in the case of space—space noncommutativity [16].

In fact our derivation is valid in any theory with 50(1,1) symmetry, if corresponding test functions belong to one of the Gelfand—Shilov space 53 with P < 1/2.

Wightman functions in noncommutative theory take the following form with the Moyal-type product:

Let us recall that the series for the Moyal-type product has the following form:

Here the expression is written only for two points x and y instead of xi, .. ., xn

In accordance with Eq. (12) Wightman functions are generalized functions corresponding to test functions, which belong to 53.

Let us consider the set of functions satisfying the condition

Evidently, these functions belong to 53. In accordance with latter condition the expansion (13) contains a finite number of derivatives. Thus, corresponding Wightman functions Wk are tempered distributions.

Now we can take advantage of using Wk: at any finite number k we have a local theory, that is a theory with finite maximal speed of interaction spread. Thus, we can assume that just as in the case

of space—space NC QFT quantum field operators satisfy local commutativity condition in respect with variables satisfying 50(1,1) symmetry, that gives us possibility to use the same derivation of Haag's theorem as in the case of space—space NC QFT. Let us point out that maximal speed of interaction spread depends on k and goes to infinity if k ^ro, as NC QFT is a theory with infinite speed of interaction spread.

Thus, we have proved Haag's theorem for the special choice of Wightman functions. Then we can take the limit k -^ro. Let us take into account that functions fk(xi,...,xn), satisfying Eq. (14), owing to convergence of the set (13), go to the limit f (xi) * ••• * f (xn). So the sequence of functionals Wk converges weakly to some functional W. It is known that Gelfand—Shilov space 53 is complete with respect to weak convergence (see [20], p. 91). Haag's theore