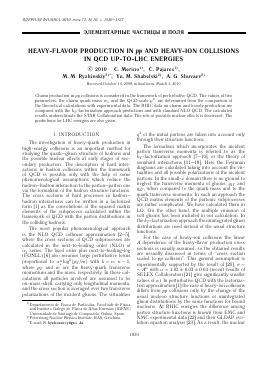 Charm production in pp collisions is considered in the framework of perturbative QCD. The values of two parameters, the charm quark mass mc and the QCD scale j2, are determined from the comparison of the theoretical calculations with experimental data. The RHIC data on charm and beauty production are compared with the kT-factorization approach predictions and with standard NLO QCD. The calculated results underestimate the STAR Collaboration data. The role of possible nuclear effects is discussed. The predictions for LHC energies are also given.

The investigation of heavy-quark production in high-energy collisions is an important method for studying the quark—gluon structure of hadrons and the possible nuclear effects at early stages of secondary production. The description of hard interactions in hadron collisions within the framework of QCD is possible only with the help of some phenomenological assumptions which reduce the hadron—hadron interaction to the parton—parton one via the formalism of the hadron structure functions. The cross sections of hard processes in hadron— hadron interactions can be written in a factorized form [1] as the convolutions of the squared matrix elements of the subprocess calculated within the framework of QCD with the parton distributions in the colliding hadrons.

The most popular phenomenological approach is the NLO QCD collinear approximation [2—5], where the cross sections of QCD subprocesses are calculated in the next-to-leading order (NLO) of as series. The fixed order plus next-to-leading-log (FONLL) [6] also resumes large perturbative terms proportional to a'n logfc (pT/m) with k = n, n — 1, where pT and m are the heavy-quark transverse momentum and the mass, respectively. In these calculations all particles involved are assumed to be on-mass-shell, carrying only longitudinal momenta, and the cross section is averaged over two transverse polarizations of the incident gluons. The virtualities

q2 of the initial partons are taken into account only through their structure functions.

The formalism which incorporates the incident parton transverse momenta is referred to as the kT-factorization approach [7—10], or the theory of semihard interactions [11 — 19]. Here the Feynman diagrams are calculated taking into account the vir-tualities and all possible polarizations of the incident partons. In the small-« domain there is no ground to neglect the transverse momenta of gluons, q\T and q2T, when compared to the quark mass and to the quark transverse momenta. In such an approach the QCD matrix elements of the partonic subprocesses are rather complicated. We have calculated them in LO. On the other hand, the multiple emission of soft gluons has been included in our calculation. In the kT-factorization approach the unintegrated gluon distributions are used instead of the usual structure functions.

For the case of heavy-ion collisions the linear A dependence of the heavy-flavor production cross sections is usually assumed, so the obtained results are ussually discussed in terms of "cross section scaled to pp collision". This general assumption is experimentally supported by the result of [20], a — - Aa with a = 1.02 ± 0.03 ± 0.03 (recent results of SELEX Collaboration [21] give significantly smaller values of a). In perturbative QCD with the factorization approximation [ 1 ] the case of heavy-ion collisions differs from pp collisions only by the change of the usual nucleon structure functions or unintegrated gluon distributions by the same functions for bound nucleons. At RHIC energies the difference among parton structure functions is known from EMC and NMC experimental data [22] and their GLDAP evolution equation analysis [23]. As a result, the nuclear

effects in QCD for the total cross section of charm production at RHIC are estimated to be on the level of 5—10% [24] of the linear A-dependence values.

The experimental data of PHENIX [25, 26] Collaboration obtained at RHIC both from pp and nuclear collisions are in reasonable agreement with the NLO QCD, and the kT-factorization approach predictions. At the same time, the STAR [27] Collaboration data obtained at RHIC in nuclear collisions are in contradiction with standard QCD calculations. In the present paper we discuss the accuracy of the theoretical calculations, and the plausible reasons for the charm production enhancement on nuclear targets.

2. DETERMINATION OF THE QCD PARAMETERS

is the cross section of the subprocess ab —> QQ, given by standard QCD as the sum of LO and NLO contributions [3—5]. These contributions depend on the parton center-of-mass energy s = (pa + pb)2 = = xaxbs, the mass of the produced heavy quark mQ (actually only on p = 4mQ/s), and the QCD renormalization scale /R.

Thus in the QCD calculation of total cross section of charm production three parameters are involved: the heavy-quark mass, mQ, and the two QCD scales, /F and /R. The heavy-quark mass mQ can be estimated as a half of the mass of light quarkonium. More accurately, in QCD the masses of heavy quarks should depend on the distance at which they are measured. When including this dependence one obtains [28, 29]:

The two QCD scales are usually assumed to be equal in numerical calculations, /2 = /F = /R, and

Fig. 1. Total cross section of charm production in pp and pp collisions at y/s > 25 GeV. Experimental fixed target data are taken from [32] and [33], RHIC point from [34], and UA2 Collaboration data from [35]. The solid curve shows the result of the fit of QCD parameters mQ and ¡j2, and dashed curves show the edges of the uncertainties (the region between the x2 minimal value and the x2 minimal value plus one).

from a general point of view they should be of the order of the maximal hardness of the interaction. If the produced heavy quarks are heavy enough, one can assume that

(2) though the estimation /2 ^ mQ + p\ used in the kT-factorization approach seems to be also reasonable.

We obtain the values of the QCD parameters mc and /2 by fitting the results of the NLO QCD expression in Eqs. (1) and (2) to the fixed target experimental data in [32] and [33], the RHIC point for pp

Fig. 3. Total cross section of charm production in pp and pp collisions at y/s > 25 GeV. Experimental fixed target data are taken from [32] and [33], the RHIC point — from [34], and the UA2 Collaboration data from [35]. PHENIX data [25,26] and STAR data [27] in nuclear collisions are shown by squares and triangles, respectively, while cosmic-ray data [38] are shown by diamonds. The solid curve shows the theoretical result obtained in the kr-factorization approach, the dashed curve corresponds to NLO QCD with only gluon—gluon fusion contribution, and the dash-dotted curve corresponds to the total NLO QCD result.

collisions [34], and the UA2 Collaboration point [35]. We have used the GRV95 parton distributions [36], which are compatible with the most modern analysis

(see discussion in [37]). Moreover, the difference to calculations performed with other sets of parton structure functions is small in the considered energy region. The result of our fit is shown in Fig. 1 by solid curve.

This fit corresponds to the following parameter values:

that seem to be very natural. The value of x2/ndf is 7.3/6. The uncertainties are shown by dashed curves and they correspond to increase of the value of x2 by one from its minimal value.

The same analysis for the total cross section of charm production in np collisions is shown in Fig. 2. Here the value of x2/ndf is 12.0/7 and the parameter values are

One has to note that in both analyses we obtain j2 ~ mC2, as it is usually assumed a priori. Also the two value