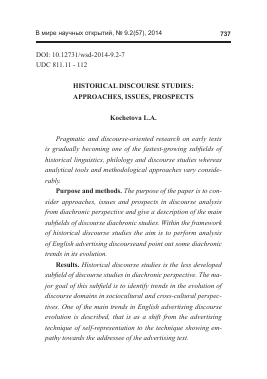 Pragmatic and discourse-oriented research on early texts is gradually becoming one of the fastest-growing subfields of historical linguistics, philology and discourse studies whereas analytical tools and methodological approaches vary considerably.

Purpose and methods. The purpose of the paper is to consider approaches, issues and prospects in discourse analysis from diachronic perspective and give a description of the main subfields of discourse diachronic studies. Within the framework of historical discourse studies the aim is to perform analysis of English advertising discourseand point out some diachronic trends in its evolution.

Results. Historical discourse studies is the less developed subfield of discourse studies in diachronic perspective. The major goal of this subfield is to identify trends in the evolution of discourse domains in sociocultural and cross-cultural perspectives. One of the main trends in English advertising discourse evolution is described, that is as a shift from the advertising technique of self-representation to the technique showing empathy towards the addressee of the advertising text.

Of all approaches to studies of discourse as a verbal part of human interaction a historical one seems to be less developed though one can hardly deny its significance for discourse analysis because if scholars want to get deep insight into the structure and functions of any object understanding is required of how this object has evolved and which characteristics are inherent to it and which have been either lost or transformed or acquired as a result of historical change.

A field of diachronic discourse studies emerged on the linguistic landscape in the last two decades when historical linguists switched from studies of the language system to research of language-in-use that had occurred earlier in synchronic linguistics and the scope of investigation in historical linguistics started to widen reaching well beyond the sentence boundary. Similarly, scholars engaged in discourse analysis, which had been commonly performed on a synchronic level, started to view communication as a dynamic phenomenon responsive to historical changes in the sociocultural context. As a result of these two trends, pragmatic and discourse-oriented research on early texts has since then both multiplied and diversified, and it is gradually becoming one of the fastest-growing subfields of historical linguistics, philology and discourse studies.

To date we can firmly state that diachronic studies of large forms of communication (genres, texts, discourses) employ various theoretical approaches, methodological procedures, and analytical tools in order to describe functional, structural and pragmatic profiles of early texts in their specific relations to context. Despite different methodologies and analytical tools applied within the framework of the suggested subfields the focus of attention is on discourse as a sequence of language units embedded in sociocultural context.

Based on Brinton's division of the research area, we will give a brief review of what has been done in this field in relation to methodology applied and concepts studied and outline prospects that can be proposed for future research. Within the framework of historical

discourse studies we will analyze the evolution of English advertising discourse domain, point out some diachronic trends and relate them to changes in broad sociocultural context.

The material for investigation of advertising discourse was taken from the British national newspapers such as The Times and the regional press such as Penny Illustrated News, Caledonian Mercury, The Ipswich Journal, Dundee Courier, etc. published between 1785 and 2012 and stored in electronic archives. The methods applied are those of discourse-analysis that consists in the following procedure: analysis of linguistic forms on the textual level, analysis of relations between the text and text-generation and text interpretation processes, investigation of situational, institutional and social context influence on advertising discourse.

Historical discourse analysis proper deals with the study of older texts using discourse analytical tools. This approach concentrates on discourse structures and is basically synchronic because it focuses on investigation of a particular discourse structure at a particular period in the development of a language. As a rule, scholars working within the framework of this approach deal with historical texts, documents and chronicles. For instance, the study of the basic narrative structures in Byzantine historiography demonstrated the fundamental difference in the structure of composition and ideological aspect between discourse of chronicles and historical discourse. The study showed that chronicles do not possess to a full degree textual coherence and co-

hesion the categories that modern linguistics recognizes as indispensable for a sequence of sentences to be qualified as the text. On the contrary, logical (causal) type of the composition structure, which is typical of narratives, is characterized by clear thematic and logical relations between successive events and states. These differences between chronicles and narratives can be interpreted in relation to socio-cultural context in which the text of chronicles was written. The author of the chronicles shared the belief that the world and history are the creation of God and neglected thematic and causal relations between the events [3].

Diachronic(ally oriented) discourse analysis suggests investigating discourse functions, categories and structure in historical perspective. The major goal of investigation into the development of an entire discourse domain requires an extensive knowledge of the inventories of text types at different points in the history of the language and this - in turn - requires detailed knowledge of specific historical text types [4]. The subfield of diachronically-oriented text linguistics aims to study text types and genres in the history of language. Within the framework of this approach attempts have been made to identify the repertoire of genres in some historical period and describe oral and written genres as well as the transformation process of oral genres into written ones. As a rule, researchers engaged into this subfield set themselves the goal of tracing the evolution of individual genres. Thus, it was established that the origin of the news genre in German newspapers is genetically rooted in the seventeenth century genres of pamphlet, chronicles, handwritten newsletters [5]. The goal of text-oriented historical linguistics is to study the impact of texts, genres and discourses on the process of language change (see, eg., [4]). Koh-

nen, who focuses on religious domain, describes the main objectives of this subfield as follows: 1) description of texts and genres created in past historical periods, and 2) identification of functional language changes in texts and genres designed to answer questions of how language resources necessary to implement the communicative text / genre function change in historical perspective, how a change in the nature of the text functional profile affects the choice of linguistic resources in historical perspective.

Although English is the most common language studied by scholars from historical perspective other languages provide interesting material for the investigation of diachronic changes as well. When st