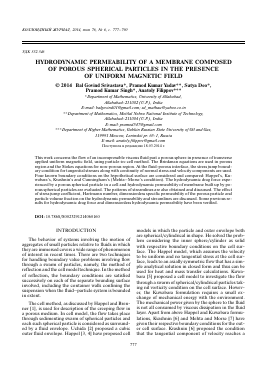 This work concerns the flow of an incompressible viscous fluid past a porous sphere in presence of transverse applied uniform magnetic field, using particle-in-cell method. The Brinkman equations are used in porous region and the Stokes equations for non-porous region. At the fluid-porous interface, the stress jump boundary condition for tangential stresses along with continuity of normal stress and velocity components are used. Four known boundary conditions on the hypothetical surface are considered and compared: Happel's, Ku-wabara's, Kvashnin's and Cunningham's (Mehta—Morse's condition). The hydrodynamic drag force experienced by a porous spherical particle in a cell and hydrodynamic permeability of membrane built up by porous spherical particles are evaluated. The patterns of streamlines are also obtained and discussed. The effect of stress jump coefficient, Hartmann number, dimensionless specific permeability of the porous particle and particle volume fraction on the hydrodynamic permeability and streamlines are discussed. Some previous results for hydrodynamic drag force and dimensionless hydrodynamic permeability have been verified.

The behavior of systems involving the motion of aggregates of small particles relative to fluids in which they are immersed covers a wide range of phenomenon of interest in recent times. There are two techniques for handling boundary value problems involving flow through a swarm of particles, namely, the method of reflection and the cell model technique. In the method of reflection, the boundary conditions are satisfied successively on each of the separate bounding surface involved, including the container walls confining the suspension when the fluid—particle system is bounded in extent.

The cell method, as discussed by Happel and Brenner [1], is used for description of the creeping flow in a porous medium. In cell model, the flow takes place through sedimenting swarm of spherical particles and each such spherical particle is considered as surrounded by a fluid envelope. Uchida [2] proposed a cubic outer fluid envelope. Happel [3, 4] have proposed cell

models in which the particle and outer envelope both are spherical/cylindrical in shape. He solved the problem considering the inner sphere/cylinder as solid with respective boundary conditions on the cell surface. The Happel model, which assumes the velocity to be uniform and no tangential stress at the cell surface, leads to an axially symmetric flow that has a simple analytical solution in closed form and thus can be used for heat and mass transfer calculations. Kuwa-bara [5] proposed a cell model to investigate the flow through a swarm of spherical/cylindrical particles taking nil vorticity condition on the cell surface. However, the Kuwabara formulation requires a small exchange of mechanical energy with the environment. The mechanical power given by the sphere to the fluid is not all consumed by viscous dissipation in the fluid layer. Apart from above Happel and Kuwabara formulations, Kvashnin [6] and Mehta and Morse [7] have given their respective boundary conditions for the outer cell surface. Kvashnin [6] proposed the condition that the tangential component of velocity reaches a

minimum at the cell surface with respect to radial distance, signifying the symmetry on the cell. However, Mehta and Morse [7] used Cunningham's [8] approach by assuming the tangential velocity as a component of the fluid velocity, signifying the homogeneity of the flow on the cell boundary. Analytical solutions of particle-in-cell models discussed earlier are always practically useful to many industrial problems.

A calculation of the viscous force exerted by a flowing fluid on a dense swarm of particles is given by Brinkman [9] in his classical paper. An analytical investigation for a two-dimensional steady, viscous, and incompressible flow past a permeable sphere embedded in another porous medium by using the Brinkman model is presented by Grosan et al. [10]. Barman [11] has reported an analytical study of the incompressible flow past an impervious sphere embedded in a porous medium of constant porosity based on the Brinkman model. He has obtained a closed form exact solution for the governing equation. Srinivasacharya and Prasad [12] have considered the creeping flow of an incompressible viscous liquid past and through a porous approximate sphere with an impermeable core. They have obtained an exact solution for the problem and they have also evaluated the drag force for the porous approximate spherical particle.

An empirical slip flow condition at the interface for a plane boundary, which is given for a rectilinear flow of a viscous fluid through a two-dimensional parallel channel formed by an impermeable upper wall and a permeable lower wall has been proposed by Beavers and Joseph [13]. Ochoa-Tapia and Whitaker [14, 15] studied the momentum transfer at the boundary between a porous medium and a homogeneous fluid both theoretically and experimentally. They developed the appropriate jump condition for momentum transport which was also named as stress jump boundary condition. Many authors have used the stress jump boundary condition in various flow problems and reported significant changes in results. Kuznetsov [16, 17] used the stress jump boundary condition at the fluid-porous interface to discuss flow in channels partially filled with porous medium. Raja Sekhar and Ama-ranath [18] solved the problem of an arbitrary Stokes flow inside a porous spherical shell by using Darcy's law for outside porous region and Stokes flow for inside region. The dependence of drag and torque on jump coefficient for an arbitrary viscous flow past a porous sphere with an impermeable core was studied by Bhattacharya and Raja Shekhar [19]. The Stokes flow through a porous sphere using the stress jump condition at the fluid-porous interface was discussed by Srivastava and Srivastava [20] and have reported that drag on a porous sphere decreases with increasing permeability of the medium.

In this paper we have discussed the effect of magnetic field for an incompressible viscous fluid past a porous sphere, using particle-in-cell method. Suitable boundary conditions are used both for porous and nonporous regions. The dependence of hydrodynamic permeability of membrane built up by porous spherical particle on stress jump coefficient, Hartman number, particle volume fraction and dimensionless permeability of porous medium is discussed graphically for each Happel, Kuwabara, Kvashnin, Mehta-Mor-se/Cunningham boundary conditions.