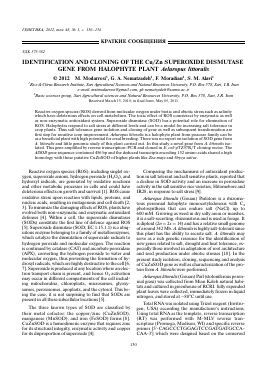 Reactive oxygen species (ROS) derived from molecular oxygen under biotic and abiotic stress such as salinity which have deleterious effects on cell metabolism. The toxic effect of ROS counteract by enzymatic as well as non-enzymatic antioxidant system. Superoxide dismutase (SOD) has a potential role for elimination of ROS. Halophytes respond to salt stress at different levels and can be a model for increasing salt tolerance in crop plants. Thus salt tolerance gene isolation and cloning of gene as well as subsequent transformation are first step for sensitive crop improvement. Aeluropus littoralis is a halophyte plant from poaceae family can be as a beneficial plant with high potential for creal breeding. There was no report on isolation of SOD gene from A. littoralis and little genomic study of this plant carried out. In this study a novel gene from A. littoralis isolated. This gene amplified by reverse transcription-PCR and cloned in E. coli pTZ57R/T cloning vector. The AlSOD gene sequence contained 456 bp and the deduced transcripts encoding 152 amino acids shared a high homology with those putative CuZnSOD of higher plants like Zea mays and Oryza sativa.

Reactive oxygen species (ROS), including singlet oxygen, superoxide anions, hydrogen peroxide (H2O2), and hydroxyl radicals, are generated by oxidative reactions and other metabolic processes in cells and could have deleterious effects on growth and survival [1]. ROS cause oxidative stress upon reaction with lipids, proteins, and nucleic acids, resulting in mutagenesis and cell death [2, 3]. To minimize the damaging effects ofROS, plants have evolved both non-enzymatic and enzymatic antioxidant defenses [4]. Within a cell, the superoxide dismutases (SODs) constitute the first line of defence against ROS [5]. Superoxide dismutase (SOD; EC 1.15.1.1) is a ubiquitous enzyme belonging to a family of metalloenzymes, which catalyze the dismutation of superoxide radicals to hydrogen peroxide and molecular oxygen. The reaction is continued by catalase (CAT) and ascorbate peroxidase (APX), converting the hydrogen peroxide to water and molecular oxygen, thus preventing the formation of hydroxyl radicals, which are highly destructive to the cell [6, 7]. Superoxide is produced at any location where an electron transport chain is present, and hence O2 activation may occur in different compartments of the cell including mitochondria, chloroplasts, microsomes, glyoxy-somes, peroxisomes, apoplasts, and the cytosol. This being the case, it is not surprising to find that SODs are present in all these subcellular locations [5].

The three known types of SOD are classified by their metal cofactor: the copper/zinc (CuZnSOD), manganese (MnSOD), and iron (FeSOD) forms [8]. CuZnSOD is a homodimeric enzyme that requires zinc for its structural integrity, enzymatic activity and copper for its disproportion of superoxide [4].

Comparing the mechanisms of antioxidant production in salt tolerant and salt sensitive plants, reported that a decline in SOD activity and an increase in peroxidase activity in the salt sensitive rice varieties, Hitomebore and IR28, in response to salt stress [9].

Aeluropus littoralis (Gouan) Parlatore is a rhizoma-tous perennial halophyte monocotyledonous with C4 photosynthesis that can endure salt (NaCl) up to 600 mM. Growing as weed in dry salty areas or marshes, it is a salt-secreting, rhizomatous and is used as forage. It is diploid (2n = 2x = 14) and has a relative small genome of around 342 Mb. A. littoralis is highly salt-tolerant since this plant has the ability to secrete salt. A. littoralis may serve as a rich genetic resource for the identification of new genes related to salt, drought and heat tolerance, especially those involved in adaptation of root architecture and seed production under abiotic stresses [10]. In the present study isolation, cloning, sequencing and analysis of CuZnSOD gene as well as characterization of the protein from A. littoralis were performed.

Total RNA was isolated using Trizol reagent (Invitro-gen, USA) according the manufacturer's instructions. Using total RNA as the template, reverse transcription (RT) was performed with M-MLV reverse transcriptase (Promega, Madison, WI) and specific reverse primer [5'-CAGCCCTGGAGTCCGATGATGCCA-CAA-3'] which were designed based on the conserved

regions of CuZnSOD from other plants such as rice, maize, wheat and etc. The cDNA was used as a template for subsequent PCR.

The cDNA reverse transcribed from reverse primer was used as the template for amplification of a Aeluropus littoralis CuZnSOD gene with two primers, AlSODF [5'-GAGAACACATAGACAATGGTGAAGGCAGTTG-3'] and AlSODR [5'-TCTAACCCTGGAGTCCGAT-GAT(A/T)CCGCAAG-3'] which were designed to recognize the conserved regions of plant CuZnSOD genes. PCR cycling conditions were as follows: 94°C for 5 min for initial denaturation; 35 cycles of94°C for 1 min, 50°C for 1 min, and 72°C for 1 min; and 72°C for 10 min for a final extension.

Homology analysis for nucleotide and protein sequence were carried out using the BLAST program (ht-tp://www.ncbi.nlm.nih.gov/blast) and Expasy (ht-tp://www.expasy.org/tools ). Multiple sequence alignment and phylogenetic tree were constructed with the program CLUSTAL X and MEGA 4.0 software.

The AlSOD gene sequence obtained in this study has been deposited in GeneBank under accession no. HM107007 for Aeluropus littoralis.

The full-length cDNA of AlSOD was obtained using RT-PCR method. The product of amplification was 520 bp (Fig. 1). The open reading frame (ORF) of456 bp flanked by 22 bp of noncoding sequence at the 5' end and 39 bp of noncoding sequence at the 3' end. The complete length of SOD gene distinguished by start and stop codons in the ends. Kozak consensus sequence was identified in 5'-noncoding sequence which may facilitate the initial binding of mRNA to the small subunit of the ribo-some. The amino acid sequence was directly determined via the nucleotide sequence ofits corresponding structural gene in primary sequence database (http://ca.ex-pasy.org/tools/#translate). The SOD protein consisted of152 residues and the predicted of molecular weight and isoelectric point were 15 kDa and 5.65 respectively. There is no significant difference in the case of Mw and pI in comparison of other plant's SOD (http://ex-pasy.org/tools/protparam.html). Bioinformatics analysis of the deduced protein showed that seven His (H) and one Asp (D) are responsible for binding copper (Cu) and zinc (Zn) ions and two Cys (S) are involved in the formation of a disulfide bridge as well as five Arg (R) residues constitute the catalytic site ofthe enzyme (Fig. 2). No evidence for signal peptides in the N-terminal sequence was obtained using the SignalP program available at the Expasy Molecular Biology Server (http://www.ex-pasy.org), suggesting the SOD was an intracellular en-

The amino acid analysis showed that AlSOD was enriched with some charged residues. The number of charged residues lysine, arginine of AlSOD was the same with Zea mays, Oryza sativa and Pennisetum glaucum (http://expasy.org/tools/protparam.html).