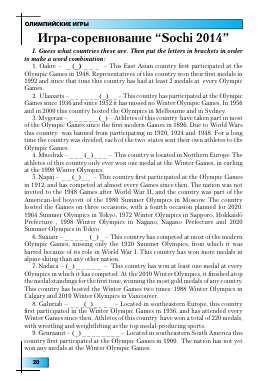 I. Guess what countries these are. Then put the letters in brackets in order to make a word combination:

Games since 1936 and since 1952 it has missed no Winter Olympic Games. In 1956 and in 2000 this country hosted the Olympics in Melbourne and in Sydney.

athletes of this country only ever won one medal at the Winter Games, in curling at the 1998 Winter Olympics.

5. Napaj -__(_)__- This country first participated at the Olympic Games

Olympic Games, missing only the 1920 Summer Olympics, from which it was barred because of its role in World War I. This country has won more medals in alpine skiing than any other nation.

first participated in the Winter Olympic Games in 1936, and has attended every Winter Games since then. Athletes of this country have won a total of 220 medals, with wrestling and weightlifting as the top medal-producing sports.

country first participated at the Olympic Games in 1900. The nation has not yet won any medals at the Winter Olympic Games.

Winter Olympic Games on only six occasions since 1968.

1 ._is the busiest creature in the winter forest. Her friends are always

amazed: just how does she find the time to do so much! For_not only studies

at the Forest Academy (where she gets excellent grades) and helps her Mum in the family restaurant, The Forest Dam, but also takes part in all manner of sporting

events._ trusts her friends so much that she doesn't have any secrets. She

simply loves sport with all her heart. And she also loves to sing and dance.

2. Beyond the Arctic Circle on a shelf of ice there lives a_. In his home,

everything is made out of ice and snow: his snow shower, his bed, his computer and

even his weight-lifting equipment._was brought up by Arctic explorers from

a very early age. It was them who taught him skiing, speed-skating and curling.

But above all_enjoyed riding sports sleighs. He became a real bobsleigh pro,

while his fellow bears, along with the seals and fur seals, love watching his sporting achievements. These days they often set up bobsleigh competitions together and during the long Arctic nights, there's never a dull moment!

3._is a rescuer and mountain-climber who lives in the uppermost branches

of a huge tree, on the highest peak of the snowy mountains in the Caucasus. He is always prepared to help those in need, and on a number of occasions has rescued

nearby villages from mighty avalanches. _____ is an experienced snowboarder

and has taught all his friends and neighbours to snowboard too. He is a cheerful character who enjoys the company of others and loves to go dancing.

Read the statements about our mascots. Choose the right answer and then compose two words (the first word is in the final phrase):

The The The polar

1. an experienced snowboarder a h T

2. takes part in all manner of sporting events o b C

3. gets excellent grades at the Forest Academy t e f

5. enjoys the company of others g i k

7. the busiest creature in the winter forest v q r

9. was brought up by Arctic explorers z s r

III. Guess what Olympic Sports these are. Find 11 sports in this line:

and attempt to impress judges, who give points for style. (прыжки на лыжах с трамплина)

towards a target area which is segmented into four concentric rings.

shoot a hard rubber hockey puck into their opponent's net to score points.

is covered with snow while standing on a board attached to a rider's feet, using a special boot set into a mounted binding.

perform on figure skates on ice.

sled down a frozen track while lying face down, during which the rider experiences forces up to 5 g and reaches speeds over 130 km/h (80 mph).

competitors race each other in travelling a certain distance on skates.

I. Names of Countries