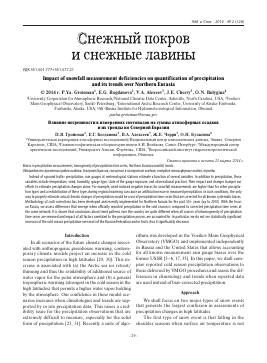 Impact of snowfall measurement deficiencies on quantification of precipitation

and its trends over Northern Eurasia

Instead of «ground truth» precipitation, rain gauges at meteorological stations estimate a function of several variables. In addition to precipitation, these variables include temperature, wind, humidity, gauge type, state of the gauge exposure, and observational practices. Their impact and changes hamper our efforts to estimate precipitation changes alone. For example, wind-induced negative biases for snowfall measurements are higher than for other precipitation types and a redistribution of these types during regional warming can cause an artificial increase in measured precipitation. In such conditions, the only way to properly estimate actual climatic changes of precipitation would be a use of precipitation time series that are corrected for all known systematic biases. Methodology of such corrections has been developed and recently implemented for Northern Eurasia for the past 50+ years (up to 2010). With the focus on Russia, we assess differences that emerge when officially reported precipitation in the cold season is compared to corrected precipitation time series at the same network. It is shown that conclusions about trend patterns over the country are quite different when all sources of inhomogeneity of precipitation time series are removed and impact of all factors unrelated to the precipitation process are accounted for. In particular, we do not see statistically significant increases of the cold season precipitation over most of the Russian Federation and in Arctic Asia it significantly decreases.

In all scenarios of the future climate changes associated with anthropogenic greenhouse warming, contemporary climate models project an increase in the cold season precipitation in high latitudes [29, 30]. This increase is associated with (a) the Arctic sea ice retreat/ thinning and thus the availability of additional source of water vapor for the polar atmosphere and (b) a general tropospheric warming (strongest in the cold season in the high latitudes) that permits a higher water vapor holding by the atmosphere. Our confidence in these model scenarios increases when climatologies and trends are supported by in situ precipitation data. This raises a credibility issue for the precipitation observations that are extremely difficult to measure, especially for the solid form of precipitation [23, 31]. Recently a suite of algo-

rithms was developed in the Voeikov Main Geophysical Observatory (VMGO) and implemented independently in Russia and the United States that allows accounting for all known measurement rain gauge biases over the former USSR [3-6, 17, 35]. In this paper, we shall compare reported cold season precipitation observations to those delivered by VMGO procedures and assess the differences in climatology and trends when reported data are used instead of bias-corrected precipitation.

We shall focus on two major types of snow events that generate the largest confusion in assessments of precipitation changes in high latitudes.

far from 0 °C. Frequently, these are intense storms substantially contributing to the cold season precipitation totals. With regional warming in the same months, the composition of precipitation from these storms may change from more frequent frozen forms (snowfall) to more liquid or mixed forms (rainfall, sleet). The ability of all contemporary rain gauges to catch the last two forms of precipitation is much better than for snowfall and, therefore, they report increasing trends in observed precipitation totals that are artificial, being a function of earlier (in spring) or later (in autumn) transitions between different precipitation forms. This phenomenon was first reported for northern Norway [22] and we shall quantify it for the entire Russia up to 2010.

The second type of snow event is that falling during storms accompanied by strong winds, especially those causing flurries and blowing snow. Rain gauge measurements in these events are compromised in two ways. First, strong winds reduce significantly the snow amount inside the gauge that can report as low as 20-30% of the «ground truth» precipitation. Second, when strong winds cause snow to blow above the gauge orifice, gauges can catch false precipitation. Contemporary gauge constructions prevent snow from leaving its bucket and measurement overcatch occurs that may significantly overestimate the «ground truth» precipitation totals over open terrain of tundra, steppe, and in the vicinity of the airports (where most of modern meteorological stations reside). The VMGO technique accounts for these events (although with understandable random errors). However, when climatic changes include the changes in the near surface wind speed (cf., [7, 12, 14, 25]), systematic temporal biases are introduced to the observed precipitation measurements in the middle of the cold season. At that time of the year the relative biases (in percent of ground truth) in the observed precipitation are especially high.

In this study, we employ two data sets, each of which includes observed and bias-corrected precipitation for Northern Eurasia. The first data set includes daily observations of 2095 stations [34, 35] for the period of observations up to 2000 (Russia) and up to 1991 (other countries of the former Soviet Union). The second data set includes daily and monthly precipitation data of 457 stations of the Russian Federation for the 19362010 period [41]. In both data sets the original observations were received from the World Data Center B for Hydrometeorology at Obninsk, Russia. The first data set has not been updated to present. Therefore, below we are using it only in climatological assessments. It has, however, the advantage of a larger spatial data extent

(includes daily precipitation data for other 14 Newly Independent States prior to 1991) and its network for the Russian Federation is denser than the currently available stations in the second network [19, 41]. It is worthwhile to mention that the reduction in the former USSR meteorological network began earlier than in the 1990s, and in the peak of the precipitation network density in the USSR, climatologists had access to the data of more than 11,000 rain gauges (cf., [13, 15]).

Another important difference between NCDC and VMGO data sets is that the former archive has a separate raw daily precipitation observations, Po, that have never been corrected while the latter archive has so-called reported daily observations, Po1966, that incorporate rough «wetting» corrections since 1966 up to date (cf., [37]). These «wetting» corrections were supposed to account for moisture left unaccounted on the gauge funnel and bucket walls during the measuring process. In 1966, observers were instructed to add 0.2 mm to each non-zero precipitation measurement and report the total as new «observed» totals. Since January 1967, the instruction for frozen precipitation measurements was changed again and the wetting correction for them was reduced to +0.1 mm. Contemporary advance correction methods employ variable wetting corrections and, therefore, require removal of old wetting corrections (cf., [4]). Po1966 can be easily converted into Po in the sub-daily time series. However, for the daily totals this conversion requires additional assumptions (cf., [24]).

Bias corrections of measured precipitation and their temporal changes

The bias-correction algorithm is thoroughly described in [3, 6, 10, 17]. Therefore, below we provide only a few of its formulae and a brief description of the reasons why these corrections are changing with time. Their absence in the observed data introduces artificial time-dependent inhomogeneities that overlay upon the ongoing climatic changes in the hydrological cycle of Northern Eurasia and may hide and/or exaggerate them misleading the users of this information.

Bias-corrected precipitation values, P, can be generated from observed Po for each synoptic period of observation (currently, half day totals for most of the RF) using the following formula:

where K, wind correction factor, is a function of precipitation type (solid, frozen, or mixed), near-surface air density, and wind speed at the gauge orifice during the period of precipitation; the last depends upon the measured wind speed (in Northern Eurasia it is usually measured, at 10 m

above the ground), the gau