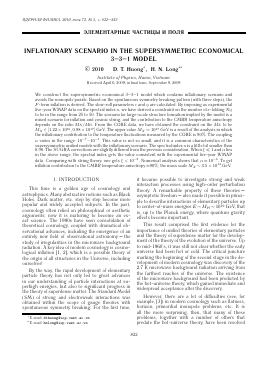 INFLATIONARY SCENARIO IN THE SUPERSYMMETRIC ECONOMICAL

We construct the supersymmetric economical 3—3—1 model which contains inflationary scenario and avoids the monopole puzzle. Based on the spontaneous symmetry breaking pattern (with three steps), the F-term inflation is derived. The slow-roll parameters e and n are calculated. By imposing as experimental five-year WMAP data on the spectral index n, we have derived a constraint on the number of e-folding Nq to be in the range from 25 to 50. The scenario for large-scale structure formation implied by the model is a mixed scenario for inflation and cosmic string, and the contribution to the CMBR temperature anisotropy depends on the ratio MX/MP\. From the COBE data, we have obtained the constraint on the MX to be MX e [1.22 x 1016,0.98 x 1017] GeV. The upper value MX ~ 1017 GeV is a result of the analysis in which the inflationary contribution to the temperature fluctuations measured by the COBE is 90%. The coupling a varies in the range: 10~7—10_1. This value is not so small, and it is a common characteristics of the supersymmetric unified models with the inflationary scenario. The spectral index n is a little bit smaller than 0.98. The SUGRA corrections are slightly different from the previous consideration. When £ с 1 and a lies in the above range, the spectral index gets the value consistent with the experimental five-year WMAP data. Comparing with string theory, one gets £ < 10~8. Numerical analysis shows that a « 10~6. To get inflation contribution to the CMBR temperature anisotropy «90%, the mass scale MX ~ 3.5 x 1014 GeV.

This time is a golden age of cosmology and astrophysics. Many abstractive notions such as Black Holes, Dark matter, etc. step by step become more popular and widely accepted subjects. In the past, cosmology often relied on philosophical or aesthetic arguments; now it is maturing to become an exact science. The 1990s have seen consolidation of theoretical cosmology, coupled with dramatical observational advances, including the emergence of an entirely new field of observational astronomy — the study of irregularities in the microwave background radiation. A key idea of modern cosmology is cosmo-logical inflation [1, 2], which is a possible theory of the origin of all structures in the Universe, including ourselves!

By the way, the rapid development of elementary particle theory has not only led to great advances in our understanding of particle interactions at superhigh energies, but also to significant progress in the theory of superdense matter. The Standard Model (SM) of strong and electroweak interactions was obtained within the scope of gauge theories with spontaneous symmetry breaking. For the first time,

it became possible to investigate strong and weak interaction processes using high-order perturbation theory. A remarkable property of these theories — asymptotic freedom — also made it possible in principle to describe interactions of elementary particles up to center-of-mass energies E ~ MPl ~ 1019 GeV, that is, up to the Planck energy, where quantum gravity effects become important.

This result comprised the first evidence for the importance of unified theories of elementary particles and the theory of superdense matter for the development of the theory of the evolution of the universe. Up to mid-1960's, it was still not clear whether the early universe had been hot or cold. The critical juncture marking the beginning of the second stage in the development of modern cosmology was discovery of the 2.7 K microwave background radiation arriving from the farthest reaches of the universe. The existence of the microwave background had been predicted by the hot-universe theory, which gained immediate and widespread acceptance after the discovery.

However, there are a lot of difficulties (see, for example, [3]) in modern cosmology such as flatness, horizon, primordial monopole problems, etc. It is all the more surprising, then, that many of these problems, together with a number of others that predate the hot-universe theory, have been resolved

in the context of one fairly simple scenario for the development of the universe — the so-called inflationary universe scenario [1]. Inflation assumes that there was a period in the very early universe when the potential and vacuum energy density dominated the energy of the universe, so that the cosmic scale factor grew exponentially.

The important ingredient of the inflationary scenario is a scalar field y having effective potential V(y) with some properties (satisfying many constrains that are rather unnatural). This scalar field is called inflaton. It was found that many unified theories contain the mentioned inflaton. Up to date, the inflationary scenario has been considered in the framework of the models such as: supersymmetric SU(5), extra-dimensional, superstring, etc. Recently a general scenario for unification of dark matter and inflation into a single field has been proposed [4].

Nevertheless, in building supersymmetric grand unified models intended to be consistent with cosmology one is confronted with two main problems. The first problem is that any semisimple grand unified gauge group, which is broken down to the SM SU(3)c ® SU(2)l ® U(l)y, inevitably leads to the formation of topologically stable monopoles, according to the Kibble mechanism [5] (see also [3]). These monopole, if present today, would dominate the energy density of the universe, and our universe would be different from what we observe. Even if the grand unified gauge group G is not semisimple, it may still be confronted with the monopole problem. The second problem, which is directly related to this first one, is that inflation usually requires tough fine-tuning of the parameters. This problem and the previously mentioned one are resolved in the inflation scenario.

One of the greatest triumphs of physics in the twentieth century is the SM, which provides a remarkable successful description of presently known phenomena. In spite of these successes, it fails to explain several fundamental issues like generation number puzzle, neutrino masses and oscillations, the origin of charge quantization, CP violation, etc. One of the simplest solutions to these problems is to enhance the SM symmetry SU(3)C ® SU(2)L ® ® U(1)y to SU(3)c ® SU(3)l ® U(1)x (called 33-1 for short) [6-8] gauge group. One of the main motivations to study this kind of models is an explanation in part of the generation number (nf) puzzle. In the 3-3-1 models, each generation is not anomaly free; and the model becomes anomaly free if one of quark families behaves differently from other two. Consequently, the number of generations is multiple of the color number. Combining with the QCD asymptotic freedom which requires nf < 5, the number of generations has to be three.

In one of the 3-3-1 models, the right-handed neutrinos are in bottom of the lepton triplets [8] and three Higgs triplets are required. It is worth noting that there are two Higgs triplets with neutral components in the top and bottom. In the earlier version, these triplets can have vacuum expectation value (VEV) either on the top or in the bottom, but not in both. Assuming that all neutral components in the triplet can have VEVs, we are able to reduce number of triplets in the model to be two [9, 10] (for a review, see [11]). Such a scalar sector is minimal, therefore it has been called the economical 3-3-1 model [12]. In a series of papers, we have developed and proved that this nonsupersymmetric version is consistent, realistic, and very rich in physics [10, 1214].

On the other hand, a triviality of the unification among the internal G and external P space-time symmetries can be avoided by new symmetry called supersymmetry [15, 16]. One of the intriguing features of supersymmetric theories is that the Higgs spectrum (unfortunately, the only part of the SM still not discovered) is quite constrained [17].

A supersymmetric version of the minimal version (without extra lepton) has been constructed in [18] and its scalar sector was studied in [19]. Lepton masses in framework of the above-mentioned model were presented in [20], while potential discovery of supersymmetric particles was studied in [21]. In [22], the ^-parity violating interaction was applied for instability of the proton.

The supersymmetric version of the 3-3-1 model with right-handed neutrinos has already been constructed in [23]. The scalar sector was considered in [24] and neutrino mass was studied in [25].

A supersymmetric version of the economical 3-31 model has been constructed in [26]. Some interesting features such as Higgs bosons with masses equal to that of the gauge bosons: the W (m2+ = mW)

pointed out in [27]. Sfermions in this model have been considered in [28]. In [29] we have shown that bino-like neutralino can be candidate for dark matter (DM).

The aim of the present paper is to show that the recently constructed supersymmetric economical 3-3-1 model contains the necessary inflation. It is emphasized that to have the inflationary scenario, we have to do spontaneous symmetry breakdown by an unusual way, namely through three steps instead of two as in the previous works [26, 27]. In [30], the ^-term inflation has been considered. The alternative F-term inflation is a subject of the present paper.

This article is organized as follows. In Section 2 we present fermion and scalar content in the super-symmetric economical 3—3—1 model. The necessary parts of Lagrangian are given in Section 3. Section 4 is devoted to the effective potential in the model with i