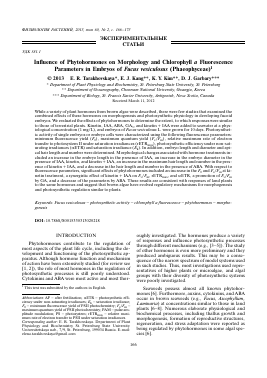 While a variety of plant hormones from brown algae were described, there were few studies that examined the combined effects of these hormones on morphogenesis and photosynthetic physiology in developing fucoid embryos. We evaluated the effects of phytohormones to determine the extent, to which responses were similar to those of terrestrial plants. Kinetin, IAA, ABA, GA3, and kinetin + IAA were added to seawater at a physiological concentration (1 mg/L), and embryos of Fucus vesiculosus L. were grown for 10 days. Photosynthetic activity of single embryos or embryo cells were characterized using the following fluorescence parameters: minimum fluorescence yield (F0), maximum quantum yield (Fv/Fm), relative maximum rate of electron transfer to photosystem II under saturation irradiances (rETRmax), photosynthetic efficiency under non-saturating irradiances (aETR) and saturation irradiance (Ek). In addition, embryo length and diameter and apical hair length and number were determined. Morphological changes associated with hormone treatments included an increase in the embryo length in the presence of IAA, an increase in the embryo diameter in the presence of IAA, kinetin, and kinetin + IAA, an increase in the maximum hair length and number in the presence of kinetin + IAA, and a decrease in the hair length and number in the presence of ABA. With respect to fluorescence parameters, significant effects of phytohormones included an increase in the F0 and Fv/Fm at kinetin treatment, a synergistic effect of kinetin + IAA on Fv/Fm, rETRmax, and aETR, a promotion of Fv/Fm by GA, and a decrease of the parameters by ABA. These results are consistent with responses of land plants to the same hormones and suggest that brown algae have evolved regulatory mechanisms for morphogenesis and photosynthetic regulation similar to plants.

Phytohormones contribute to the regulation of most aspects of the plant life cycle, including the development and functioning of the photosynthetic apparatus. Although hormone function and mechanism of action have been extensively studied (for review see [1, 2]), the role of most hormones in the regulation of photosynthetic processes is still poorly understood. Cytokinins and ABA were most active and most thor-

oughly investigated. The hormones produce a variety of responses and influence photosynthetic processes through different mechanisms (e.g., [3-5]). The study of other hormones is even more preliminary and they produced ambiguous results. This may be a consequence of the narrow spectrum of model systems used in such studies. Thus, most investigations used representatives of higher plants or microalgae, and algal groups with their diversity of photosynthetic systems were poorly investigated.

Seaweeds possess almost all known phytohormones [6]. Furthermore, auxins, cytokinins, and ABA occur in brown seaweeds (e.g., Fucus, Ascophyllum, Laminaria) at concentrations similar to those in land plants [6-8]. Numerous elaborate physiological and biochemical processes, including thallus growth and morphogenesis, formation of reproductive structures, regeneration, and stress adaptation were reported as being regulated by phytohormones in some algal species [6].

Exogenous application of natural and synthetic auxins and cytokinins affected the induction of polarity, germination and growth of fucoid zygotes [8, 9]. Zygotes and embryos of these algae develop independently of maternal tissues and are photosynthetically competent [10, 11]. Thus, the energy and structural elements necessary for embryo development must be, at least partially, produced by photosynthesis. Here we address the question: can phytohormones regulate photosynthetic parameters characterized by chlorophyll a fluorescence measurements in developing zygotes and embryos of fucoids?

Fertilization of fucoid eggs occurs externally in sea-water. Consequently, the development of zygotes and embryos is independent of maternal tissues. This feature makes fucoid embryos an excellent model system, especially since they are easily cultivated in laboratory conditions [12, 13]. After the first asymmetric division (within 24 h of fertilization), fucoid zygotes form two cells that differ in morphological and physiological characteristics. The upper or "thallus" cell subsequently gives rise to the frond, thus producing all the organs and structures of the erect plant. The lower cell initially forms a rhizoid, and this eventually develops into the holdfast. This anatomical differentiation defines a physiological differentiation that has implications for the photosynthetic characteristics of the embryo as a whole. Even as two-celled, the thallus and rhizoidal cells are obviously different because most chloroplasts after the first division are in the thallus cell [12]. Thus, from the perspective ofphotosynthetic processes, these two cells and their division products should be considered separately.

Pulse amplitude modulation (PAM) fluorometry uses fluorescence characteristics of chlorophyll a to characterize the photosynthetic processes in plant cells in vivo [14-16]. Microscopy-PAM ("Walz", Germany) was developed to allow for the characterization of fluorescence parameters that reflect photo-synthetic activity on very small spatial scales, and also in single cells. This technology provides an excellent approach for investigating the development of the photosynthetic apparatus during fucoid embryogenesis. PAM fluorometry has been used previously for studies of fucoid photosynthesis [17, 18]. Kim et al. [11] used Microscopy-PAM to study photosynthetic parameters in unfertilized eggs and developing embryos of Ascophyllum nodosum. The objective of this paper was to examine the influence of several key phytohormones (IAA, kinetin, GA, and ABA) on the photosynthetic activity of developing embryos of Fucus vesicu-losus. In addition, we examined differentiation of photosynthetic parameters in rhizoid and thallus cells of two-celled embryos.

(45.19° N, 61.34° W) on the Atlantic coast of Nova Scotia, Canada in June and July 2007. Mature receptacles were collected in the mid-intertidal zone during low tide, washed with seawater, dried with filter paper, and stored in the dark at 4-10°C for up to ten days. We followed Quatrano [12] to obtain gametes and fertilization. Immediately after fertilization (AF) the zygotes were divided into several groups and each group was placed in Petri dishes in seawater previously heated to 90°C on two successive days. Developing zygotes and embryos were maintained in Petri dishes with sea-water at 15°C under continuous light provided by cool white fluorescent tubes at an irradiance of 20-25 ^mol photons/(m2 s). Embryos were grown in seawater alone (control) or in seawater supplemented with 1 mg/L IAA (I-3750), kinetin (K3378), GA3 (G7645), and ABA (862169) (all from "Sigma-Aldrich") as well as with the mixture of IAA and kinetin (each at 1 mg/L). Phytohormones were added to the experimental cultures from the stock solutions just AF. Stock solutions of the hormones IAA, ABA, and GA were prepared in 96% alcohol, whereas kinetin was dissolved in 0.05 M HCl. The final concentrations of alcohol and HCl in seawater were not higher than 0.05%. Preliminary experiments showed that this had no significant effect on pH in the medium or embryo development (data not shown). To minimize breakdown of the phytohormones, medium was replenished daily. Samples for fluorescence measurement and analysis of morphology were harvested 2 h after egg release from oogonia and then 1, 2, 3, 6, 8, and 10 days AF.

Morphometric analysis. Eight-day-old embryos were measured using a calibrated Olympus BH2 microscope at 200x magnification. We measured embryo length and maximal diameter of the thallus part of embryos (excluding apical hairs). In addition, the number and maximal length of apical hairs were determined.

Chlorophyll fluorescence measurement. Variable chlorophyll a fluorescence of F. vesiculosus embryos was measured using a Microscopy-PAM apparatus comprising a computer-operated PAM-Control Unit ("Walz") as described previously [11, 19]. This instrument employs a blue light emitting diode with a peak emission at 470 nm, which not only serves as sources of measuring light, but of actinic light and saturation pulses as well. Light was measured using a special pinhole Micro Quantum Sensor ("Walz") that had been calibrated against a Li-Cor quantum s