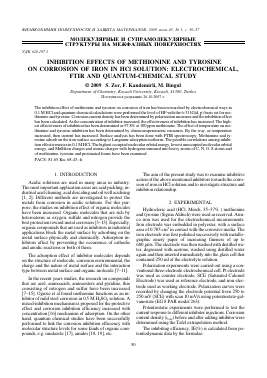 INHIBITION EFFECTS OF METHIONINE AND TYROSINE ON CORROSION OF IRON IN HCl SOLUTION: ELECTROCHEMICAL, FTIR AND QUANTUM-CHEMICAL STUDY

The inhibition effect of methionine and tyrosine on corrosion of iron has been researched by electrochemical ways in 0.1 M HCl and quantum chemical calculations were performed the level of HF with the 6-3llG(d, p) basis set for methionine and tyrosine. Corrosion current density has been determined by polarization measures and the inhibition effect has been calculated. As the concentration of inhibitor increased, the effectiveness of inhibition has increased. The highest effectiveness of inhibition has been determined as 97.8% at 100 ppm methionine. The effect of temperature on methionine and tyrosine inhibition has been determined by chronoamperometric measures. By the way, as temperature increased, then current has increased. Surface analysis has been done with FTIR spectroscopy. Methionine and ty-rosine adsorb on the iron surface according to Langmiur adsorption isotherm. The possible correlations among inhibition effectivenesses in 0.1 M HCl, The highest occupied molecular orbital energy, lowest unoccupied molecular orbital energy, and Mulliken charges and atomic charges with hydrogens summed into heavy atoms of C, N, O, S atoms and of methionine, tyrosine and protonated forms have been examined.

Acidic solutions are used in many areas in industry. The most important application areas are acid pickling, industrial acid cleaning, acid descaling and oil well acidising [1, 2]. Different methods are investigated to protect the metals from corrosion in acidic solutions. For this purpose, the studies on inhibition effect of organic molecules have been increased. Organic molecules that are rich by heteroatoms as oxygen, sulfide and nitrogen provide the best protection toward metal corrosion [3-13]. Especially, organic compounds that are used as inhibitors in industrial applications block the metal surface by adsorbing on the metal surface physically and chemically. Adsorption inhibitors affect by preventing the occurrence of cathodic and anodic reactions or both of them.

In the recent years studies, the research on compounds that are azol, aminoacids, aminoesters and pyridine, thio consisting of nitrogen and sulfur have been increased [7-15]. Oguzie et al found methionine functions as an inhibitor of mild steel corrosion in 0.5 M H2SO4 solution. A mixed-inhibition mechanism is proposed for the protective effect and corrosion inhibition efficiency increased with concentration [16] mechanism of adsorption. On the other hand, quantum chemical studies have been successfully performed to link the corrosion inhibition efficiency with molecular structure levels for some kinds of organic compounds, e.g. imidazole [17], amides [18, 19], etc.

The aim of the present study was to examine inhibitive action of the above mentioned inhibitors towards the corrosion of iron in HCl solution and to investigate structure and inhibiton relationship.

Hydrocloric acid (HCl, Merch, 35-37% ) methionine and tyrosine (Sigma Aldrich) were used as received. Arm-co iron was used for the electrochemical measurements. Iron electrode was embedded in polyester, with a surface area of 0.785 cm2 in contact with the corrosive media. The iron electrode was first polished successively with metallographic emery paper of increasing fineness of up to 600 grits. The electrode was then washed with distilled water, degreased with acetone, washed using distilled water again and then inserted immediately into the glass cell that contained 250 ml of the electrolyte solution.

Potentiostatic experiments were performed to test the current response to different inhibitor injections. Corrosion current density (icorr) before and after adding inhibitor were determined using the Tafel extrapolation method.

The inhibiting efficiency, IE(%) is calculated from po-tentiodynamic data by the formulae:

Fig. 1. Polarization curves of iron with methionine and without methionine in 0.1 M HCl.

Fig. 2. Polarization curves of iron with tyrosine and without tyrosine in 0.1 M HCl.

Where (icorr)o and (icorr)inh are the uninhibited and inhib -ited corrosion current densities, respectively, determined by extrapolation of Tafel lines.

Chronoamperometric measurements were carried on constant potential. At different temperatures of inhibitors current-time curves were obtained

For the FTIR analysis, iron plates were dipped for 10 days in solutions with inhibitor and without inhibitor. The FTIR spectra (400-4000 cm-1) have been recorded on using a Shimadzu 8201/86601 PC spectrometer The spec -trum of the protective film formed on the surface was re -corded using FTIR after drying, mixing it with KBr and making a pellet out of it.

It is observed that as the concentration of inhibitor is increased, then the effect of inhibition increased. Although both of methionine and tryrosine is effective, the greatest effect is observed 0.1M HCl solutions containing 100 ppm methionine. The inhibition efficiency reaches its best performance with methionine (E = 97.7%) which has a sulphur atom in the molecule; the presence of free electron pairs in this atoms plays the major role in adsorption. Corrosion potential particularly changes towards more

Table 1. Electrochemical corrosion parameters for iron in 0.1 M HCl with and without inhibitor

The second step is occurrence of metal-inhibitor complexes with freshly generated Fe2+ ions on the steel surface.

Besides amino acids is protonated state in acidic solutions [9].

It is generally accepted that the presence of halide ions in acidic media synergistically increases the inhibition efficiency of some organic compounds [7]. In halide containing acidic solutions, especially chloride ions which are considered as pit initiators [21], the metal surface is mostly covered with adsorbed layer of the halide ions, the amino acid molecule with its protonated form will be adsorbed on the active sites, where the Cl- are already present according to the following formulation [13]:

It is generally accepted that the first step in the adsorption of an organic inhibitor on a metal surface usually involves the replacement of water molecules adsorbed at the metal surface [15];