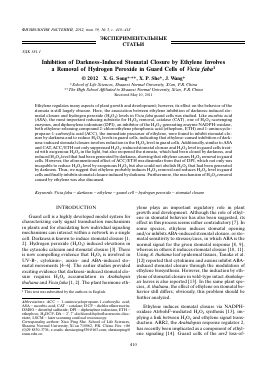 Ethylene regulates many aspects of plant growth and development; however, its effect on the behavior of the stomata is still largely obscure. Here, the association between ethylene inhibition of darkness-induced stomatal closure and hydrogen peroxide (H2O2) levels in Vicia faba guard cells was studied. Like ascorbic acid (ASA), the most important reducing substrate for H2O2 removal, catalase (CAT), one of H2O2-scavenging enzymes, and diphenylene iodonium (DPI), an inhibitor of the H2O2-generating enzyme NADPH-oxidase, both ethylene-releasing compound 2-chloroethylene phosphonic acid (ethephon, ETH) and 1-aminocyclo-propane-1-carboxylic acid (ACC), the immediate precursor of ethylene, were found to inhibit stomatal closure by darkness and to reduce H2O2 levels in guard cells, indicating that ethylene-caused inhibition of darkness-induced stomatal closure involves reduction in the H2O2 level in guard cells. Additionally, similar to ASA and CAT, ACC/ETH not only suppressed H2O2-induced stomatal closure and H2O2 level in guard cells treated with exogenous H2O2 in the light, but also reopened the stomata, which had been closed by darkness, and reduced H2O2 level that had been generated by darkness, showing that ethylene causes H2O2 removal in guard cells. However, the aforementioned effect of ACC/ETH was dissimilar from that of DPI, which not only was incapable to reduce H2O2 level by exogenous H2O2 but also could not abolish H2O2 that had been generated by darkness. Thus, we suggest that ethylene probably induces H2O2 removal and reduces H2O2 level in guard cells and finally inhibits stomatal closure induced by darkness. Furthermore, the mechanism of H2O2 removal caused by ethylene was also discussed.

Guard cell is a highly developed model system for characterizing early signal transduction mechanisms in plants and for elucidating how individual signaling mechanisms can interact within a network in a single cell. Darkness is known to induce stomatal closure [1, 2]. Hydrogen peroxide (H2O2) induced elevations in the cytosolic calcium and stomatal closure [3]. There is now compelling evidence that H2O2 is involved in UV-B-, cytokinin-, auxin- and ABA-induced stomatal movements [4-6]. The earlier studies provided exciting evidence that darkness-induced stomatal closure requires H2O2 accumulation in Arabidopsis thaliana and Vicia faba [1, 2]. The plant hormone eth-

ylene plays an important regulatory role in plant growth and development. Although the role of ethyl-ene in stomatal behavior has also been suggested, its effect in this process seems rather contradictory [7]. In some species, ethylene induces stomatal opening and/or inhibits ABA-induced stomatal closure, or stomatal sensitivity to stresses/cues, in which ABA is the normal signal for the given stomatal response [8, 9], whereas in others it induces stomatal closure [10, 11]. Using A. thaliana leaf epidermal tissues, Tanaka et al. [12] reported that cytokinins and auxins inhibit ABA-induced stomatal closure through the modulation of ethylene biosynthesis. However, the induction by eth-ylene of stomatal closure in wild-type intact Arabidopsis leaves is also reported [13]. In the same plant species, A. thaliana, the effect of ethylene on stomatal behavior still differs; obviously, this problem should be further analyzed.

Ethylene induces stomatal closure via NADPH-oxidase AtrbohF-mediated H2O2 synthesis [13], implying a link between H2O2 and ethylene signal transduction. ARR2, the Arabidopsis response regulator 2, has recently been implicated as a component of ethylene signaling [14]. Guard cells of the arr2 loss-of-

function mutant do not close stomata in response to either ethylene or H2O2, although they do respond to ABA [14]. A very recent paper from He et al. [15] indicates that ethylene mediates UV-B-induced sto-matal closure via peroxidase-dependent H2O2 synthesis. However, up to now, it is unknown whether or not there is a link between the inhibition of darkness-induced stomatal closure by ethylene and the change in the H2O2 level in V. faba guard cells. In this study, by using pharmacological approaches and using laser-scanning confocal microscopy (LSCM) based on the molecular probe, 2\7'-dichlorodihydrofluorescein diacetate (H2DCF-DA), we found that the inhibition of darkness-induced stomatal closure by ethylene is related to a decrease in H2O2 level in the guard cells of V. faba. Moreover, the mechanism of H2O2 reduction caused by ethylene is also discussed.

Plant materials. Broad bean (Vicia faba L.) was grown in controlled-environment plant growth chamber with a humidity of 80%, a photo flux density of 300 ^mol/(m2 s) of photosynthetically active radiation generated by cool white fluorescent tubes ("Philips", United States), and an ambient temperature of 25 ± 1°C with a 14-h photoperiod. The epidermis was peeled carefully from the abaxial surface of the youngest fully expanded leaves of 4-week-old seedlings and cut into pieces about 5-mm width and 5-mm lengths.

Stomatal bioassay. Stomatal opening and closing were monitored as the following steps. To study the effect of ethylene on darkness-induced stomatal closure, freshly prepared abaxial epidermal strips were incubated in CO2-free Mes/KCl buffer (10 mM Mes/KOH, 50 mM KCl), and 100 ^M CaCl2, pH 6.15 in darkness in buffer alone or in buffer containing ACC, ETH, or other compounds (ASA, CAT, or DPI) for 3 h at the temperature of 25°C. Final stomatal apertures were recorded with a light microscope and an eyepiece graticule previously calibrated with a stage micrometer. To study the effect of ethylene on stomatal closing caused by exogenous H2O2, epidermal strips were incubated

in Mes/KCl buffer with H2O2 alone, or in buffer containing ACC, ETH, and other compounds for 3 h under light (300 ^mol/(m2 s)) conditions with the temperature of 25°C, and then the apertures were recorded. To study the effect of ethylene on the closed stomata having been caused by darkness, strips were incubated in Mes/KCl buffer alone for 3 h in darkness, and then were treated with fresh buffer alone or that containing ACC, ETH, or other compounds for another 3 h in darkness. Final stomatal apertures were recorded.

In all stomatal bioassays, the apertures at starting points were measured. In all cases, darkness incubation was performed under identical temperature of 25°C in an incubator ("Boxun Industry & Commerce Co., Ltd Medical Equipment Factory", China). To avoid any potential rhythmic effects on stomatal aperture, experiments were always started at the same time of the day. In each treatment, we scored randomly 30 apertures each times, and every treatment was repeated three times. The data presented are the means of 90 measurements ± standard error.

Loading with a molecular probe H2DCF-DA. H2O2 was measured according to the method described in [16] with some modifications. To study the effect of ethylene on the H2O2 level in guard cells treated with darkness and exogenous H2O2, the epidermal strips were treated for 3 h as described in stomatal bioassay section immediately placed into the loading Tris-KCl buffer (Tris 10 mM and KCl 50 mM, pH 7.2) containing 50 ^M H2DCF-DA for 10 min in darkness at 25 ± 1°C. In the experiments that determined the effect of ethylene on H2O2 level having been generated by darkness in guard cells, strips were incubated in Mes/KCl buffer for 3 h in darkness and then treated with fresh buffer alone or that containing ACC, ETH, or other reagents for another 3 h in darkness; after these steps, the dye H2DCF-DA was loaded.

After washing off excess dye with fresh Tris-KCl loading buffer in darkness, examination of the strips was immediately performed using a TCS SP5 laser-scanning confocal microscope ("Leica Lasertechnik", Germany) with the following settings: excitation at 488 nm, emission at 530 nm, power 10%, zoom about 4, normal scanning speed, and frame 512 x 512 pixels. Images acquired from the confocal microscope were analyzed using Leica image software and Adobe Photoshop 7.0. To enable the comparison of changes in signal intensity, confocal images were taken under identical conditions (in manual setup) for all samples, and in each treatment we measured three epidermal st