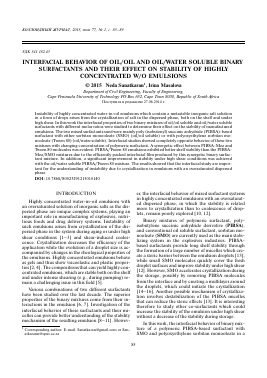 Instability of highly concentrated water-in-oil emulsions which contain a metastable inorganic salt solution in a form of drops arises from the crystallization of salt in the dispersed phase, both on the shelf and under high shear. In this work the interfacial properties of two binary mixtures of oil/oil soluble and oil/water soluble surfactants with different molar ratios were studied to determine their effect on the stability of manufactured emulsions. The two mixed surfactants used were mainly poly (isobutenyl) succinic anhydride (PIBSA)-based surfactant with either sorbitan monooleate (SMO) (oil/oil soluble) or with polyoxyethylene sorbitan mo-nooleate (Tween 80) (oil/water soluble). Interfacial studies showed completely opposite behavior of these two mixtures with changing concentration of polymeric surfactant. A synergetic effect between PIBSA-Mea and Tween 80 molecules was evident. PIBSA/Tween 80 emulsions exhibited better shelf stability than the PIBSA-Mea/SMO mixtures due to the efficiently packed interfacial film produced by this synergetic binary surfactant mixture. In addition, a significant improvement in stability under high shear conditions was achieved with the oil/water soluble PIBSA/Tween 80 mixture. The results showed that the interfacial study are important for the understanding of instability due to crystallization in emulsions with an oversaturated dispersed phase.

Highly concentrated water-in-oil emulsions with an oversaturated solution of inorganic salts as the dispersed phase are unique complex systems, playing an important role in manufacturing of explosives, nutritious foods and drug delivery systems. Instability of such emulsions arises from crystallization of the dispersed phase in the system during aging or under high shear conditions [1—3] and shear-induced coalescence. Crystallization decreases the efficiency of the application while the evolution of a droplet size is accompanied by changes in the rheological properties of the emulsions. Highly concentrated emulsions behave as gels and thus show viscoelastic and plastic properties [2, 4]. The compositions that can yield highly concentrated emulsions, which are stable both on the shelf and under intense shearing (e.g., during pumping) remain a challenging issue in this field [5].

Various combinations of two different surfactants have been studied over the last decade. The superior properties of the binary mixtures come from their interactions in the emulsion [6, 7]. Investigation of the interfacial behavior of these surfactants and their micelles can provide better understanding of the stability mechanism of the resulting emulsion [8—11]. Howev-

er, the interfacial behavior of mixed surfactant systems in highly concentrated emulsions with an oversaturat-ed dispersed phase, in which the stability is related more to crystallization than to coalescence of droplets, remain poorly explored [10, 12].

Binary mixtures of polymeric surfactant, poly-isobutylene succinic anhydride derivative (PIBSA), and conventional oil soluble surfactant, sorbitan mo-nooleate (SMO) are currently used as the main stabilizing system in the explosives industries. PIBSA-based surfactants provide long shelf stability through the formation of a large number of micelles which create a steric barrier between the emulsion droplets [13], while small SMO molecules quickly cover the fresh droplet surfaces and improve stability under high shear [12]. However, SMO accelerates crystallization during the storage, possibly by removing PIBSA molecules from the interface and by creating a multilayer around the droplets, which could initiate the crystallization [14—16]. Another possible mechanism of crystallization involves destabilization of the PIBSA micelles that can reduce the steric effects [13]. It is interesting therefore to study other co-surfactants which could increase the stability of the emulsion under high shear without a decrease of the stability during storage.

In this work, the interfacial behavior of binary mixture of a polymeric PIBSA-based surfactant with SMO and polyoxyethylene sorbitan monooleate in a

Fig. 1. Structural formula of the head group of PIBSA-Mea, in which R is the polyisobutylene chain with a repeat unit of -C(CH3)2-CH2-.

wide range of surfactant/co-surfactant ratios was studied in order to understand the stability mechanisms of super-concentrated emulsions with metastable dispersed droplets.

Monoethanolamine derivative of polyisobutylene succinic anhydride surfactant (PIBSA-Mea) with a total molecular weight of 1109 g/mole and highly polar oil (Ash-H) with short alkyl chains, were supplied by Lake International Technologies (South Africa). The chemical composition of PIBSA-Mea is shown in Fig. 1. Ash-H mainly contains short chain paraffins (>99%) and small amount of aromatics (<0.1%) and has a density of 794 kg/m3 at 20°C.

Sorbitan monooleate, SMO (trade name Span 80), with polyoxyethylene sorbitan monooleate (trade name Tween 80) as co-surfactant were purchased from Merck and Sigma-Aldrich respectively and were used without further purication (Fig. 2). Ammonium nitrate (AN), an inorganic salt, was purchased from Merck and added to ultra-pure water prepared by a Milli-Q purification system to prepare the aqueous phase.

For the interaction studies various concentrations of PIBSA-Mea were added to oil. Interfacial tension between the aqueous and the oil phases was measured to determine the critical micelle concentration (CMC) of PIBSA-Mea using the Wilhelmy plate method. In the next step, two sets of samples were prepared by adding a specific amount ofPIBSA-Mea (below CMC and above CMC) mixed with different concentrations of two co-surfactants in the oil. Adding Tween 80, as a water soluble surfactant, to the aqueous phase was not possible because the aqueous phase was saturated with ammonium nitrate and there was insufficient water available to dissolve the surfactant molecules. However, Tween 80 was fully dispersed in the polar Ash-H oil, with an interfacial tension equal to 20 mN/m.

To manufacture the highly concentrated water-in-oil emulsions with an oversaturated dispersed phase, a 10 : 1 w/w ratio of PIBSA-Mea/co-surfactants was used. The surfactant mixtures (8 wt % in oil phase) were added to the oil prior to emulsification. The emulsion formulations consist of 80% AN solution with the ratio of aqueous to oil phases of 92.4 : 7.6 wt %. The two phases were mixed using Hobart N50 mixer at a temperature above the fudge point (Tf^ ~ 60°C) of the AN solution. After initial gentle mixing the pre-emulsions were refined at higher shear until the desired dispersed phase droplet size was reached (d32 = = 10 ^m). At ambient temperature (~25°C) the solutions were thermodynamically unstable, but kinetical-ly there were no changes in emulsion structure for a time sufficient to complete the investigation. Crystallization of the dispersed phase occurred over a period of several days to several weeks.

To determine the interfacial tension (a) at the water—oil interface in the presence of surfactants, the Wilhelmy plate method was applied using a Kruss K100 tensiometer with a platinum plate. All measure-

ments were done at a temperature of 25.0 ± 0.1°C. Each measurement was made by adding 12 mL of 60% AN solution and 50 mL of oil phase containing surfactants to the 70 mL glass cup. Each test ran for 2 hours to ensure the equilibrium value of interfacial tension was measured for each system. Crystallization in the emulsions was examined under a Leica optical microscope with x500 magnification to corroborate the stability of the samples before experiments and also to monitor the aging (initiation and kinetics of crystallization) of the emulsions.

The droplet size (d32) of the emulsions was monitored during refinement using a light scattering method with Malvern Mastersizer 2000 instrument. The refinement was stopped at d32 = 10 ^m for all samples. To investigate the stability for pumping applications, fresh emulsion samples were subjected to high shear (~1200 Pa) by passing them five times, at a pressure of 4 bar, through a 0 4 mm orifice hole with the length of 3 mm in a double cylindrical chamber.

The measured values of CMC and minimum interfacial tension at CMC of PIBSA-Mea, SMO and Tween 80 are listed in Table 1. The measurements showed that the adsorption efficiency of Tween 80 is higher than that of PIBSA-Mea and SMO.

Table 1. Values of CMC and corresponding values of interfacial tension for the surfactants used