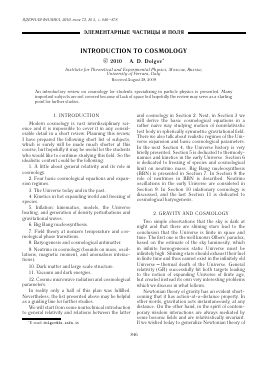 An introductory review on cosmology for students specializing in particle physics is presented. Many important subjects are not covered because of lack of space but hopefully the review may serve as a starting point for further studies.

Modern cosmology is vast interdisciplinary science and it is impossible to cover it in any considerable detail in a short review. Planning this review, I have prepared the following short list of subjects, which is surely will be made much shorter at this course, but hopefully it may be useful for the students who would like to continue studying this field. So the idealistic content could be the following:

1. A little about general relativity and its role in cosmology.

3. The Universe today and in the past.

4. Kinetics in hot expanding world and freezing of species.

In reality only a half of this plan was fulfilled. Nevertheless, the list presented above may be helpful as a guiding line for further studies.

and cosmology in Section 2. Next, in Section 3 we will derive the basic cosmological equations in a rather naive way studying motion of nonrelativistic test body in spherically symmetric gravitational field. There we also talk about realistic regimes of the Universe expansion and basic cosmological parameters. In the next Section 4, the Universe history is very briefly presented. Section 5 is dedicated to thermodynamics and kinetics in the early Universe. Section 6 is dedicated to freezing of species and cosmological limit on neutrino mass. Big Bang nucleosynthesis (BBN) is presented in Section 7. In Section 8 the role of neutrinos in BBN is described. Neutrino oscillations in the early Universe are considered in Section 9. In Section 10 inlationary cosmology is discussed, and the last Section 11 is dedicated to cosmological baryogenesis.

Two simple observations that the sky is dark at night and that there are shining stars lead to the conclusion that the Universe is finite in space and time. The first one is the well known Olbers' paradox, based on the estimate of the sky luminosity, which in infinite homogeneous static Universe must be infinitely high. Shining stars should exhaust their fuel in finite time and thus cannot exist in the infinitely old Universe — thermal death of the Universe. General relativity (GR) successfully hit both targets leading to the notion of expanding Universe of finite age, but created instead its own very interesting problems which we discuss in what follows.

Newtonian theory of gravity has an evident shortcoming that it has action-at-a-distance property. In other words, gravitation acts instantaneously, at any distance. On the other hand, in the spirit of contemporary wisdom interactions are always mediated by some bosonic fields and are relativistically invariant. If we wished today to generalize Newtonian theory of

gravity to relativistic theory we could take, a priori as a mediator of interactions scalar, vector, or tensor intermediate bosons, confining ourselves to lower spins.

Since we know that gravity operates at astronomically large distances, the mass of the intermediate boson should be zero or very small. Indeed, massless bosons create static Coulomb type potential U ~ 1/r while massive bosons lead to exponentially cutoff Yukawa potential U ~ exp(-mr)/r.

Scalar and tensor mediators lead to attraction of matter—matter and matter—antimatter and both are a priori allowed. According to nonrelativistic Newtonian theory the source of gravity is mass. Possible relativistic generalisation for scalars should be a scalar quantity coinciding in nonrelativistic limit with mass. The only known such source is the trace of the energy—momentum tensor of matter Ttf. The relativistic equation of motion for scalar gravity should have the form:

where GN is the Newtonian gravitational coupling constant. Such theory is rejected by the observed light bending in gravitational field, since for photons: T^ = 0. A small admixture of scalar gravity to tensor one, i.e. Brans—Dicke theory [1], is allowed.

There remains massless tensor theory with the source which may be only the energy—momentum tensor of matter T^v. In first approximation the equation of motion takes the form:

This equation is valid in the weak field approximation because the energy—momentum of h¡v itself should be included to ensure conservation of the total energy—momentum.

Massless particles, as, e.g., gravitons, must interact with a conserved source. Otherwise theory becomes infrared pathological. The energy—momentum tensor of matter is conserved only if the energy transfer to gravitational field is neglected. Taking into account energy leak into gravity leads to nonlinear equations of motion and allows to reconstruct GR order by order. For a discussion of this approach see papers [2].

Historically, Einstein did not start from field-theoretical approach but formulated GR in an elegant and economical way as geometrical theory

postulating that matter makes space—time curved and that the motion of matter in gravitational field is simply free fall along geodesics of this curved manifold. This construction is heavily based on the universality of gravitational action on all types of matter — the famous equivalence principle, probably first formulated by Galileo Galilei. The least action principle for GR was formulated by Hilbert with the action given by

where R is the curvature scalar of 4D space—time and Am is the matter action, written in arbitrary curved coordinates. Gravitational field is identified with the metric tensor g¡v of the curved space—time. The curvature is created by matter through equations of motion:

where R^V is the Ricci tensor. There is no space here to stop on technicalities of Riemann geometry. A good introduction can be found, e.g., in [3] where one can find definition and properties of the Christoffel symbols , Riemann tensor R^av?, Ricci tensor

The source of gravity is the energy—momentum tensor of matter taken in this curved space—time:

The impact of gravity on matter is included into T V due to its dependence on metric and in some more complicated cases on the curvature tensors. Let us repeat that the motion of matter in the gravitational field is simply the free fall, i.e. motion along geodesics.

Classical tensor theory of gravity agrees with all available data and is a self-consistent, very beautiful and economic theory. It is essentially based on one principle of general covariance, which is a generalization of Galilei principle of relativity to arbitrary coordinate frames. Invariance with respect to general coordinate transformation (which is called general covariance) is a natural framework which ensures vanishing of the graviton mass mg. Even if the underlying classical theory is postulated to be massless, quantum corrections should generally induce nonzero mass if they are not prevented from that by some symmetry principle. This is another advantage of tensor gravity with respect to scalar one for which no principle which forbids nonzero mass is known. Though quantum gravity is not yet understood, it is natural to expect that quantum corrections should induce mg = 0 in absence of general covariance.

An important property of equations of motion (4) is that their r. h. s. is covariantly conserved:

Accordingly, the energy—momentum tensor must be conserved too:

in the early stage, as indicated by isotropy of cosmic microwave background radiation (CMB), and even now at large scales. Correspondingly the metric can be taken as homogeneous and isotropic one (Friedmann—Robertson—Walker (FRW) metric [6]):

It is similar to covariant derivative in gauge theories, because the latter includes gauge field, A^ analogous to ra

According to the Noether theorem, the conservation of T1V follows from the least action principle if the matter action is invariant with respect to general coordinate transformation. So the gravitationa