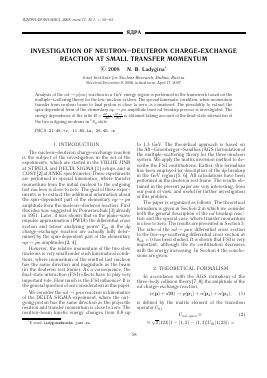 Analysis of the nd ^ p(nn) reaction in a GeV energy region is performed in the framework based on the multiple-scattering theory for the few-nucleon system. The special kinematic condition, when momentum transfer from neutron beam to final proton is close to zero, is considered. The possibility to extract the spin-dependent term of the elementary np ^ pn amplitude from nd breakup process is investigated. The energy dependence of the ratio R = ^f/^f- is obtained taking account of the final-state interaction of the two outgoing neutrons in 1S0 state.

The nucleon—deuteron charge-exchange reaction is the subject of the investigation in the set of the experiments, which are started in the VBLHE JINR at STRELA and DELTA SIGMA [1] setups and in COSY [2] at ANKE spectrometer. These experiments are performed in special kinematics, where transfer momentum from the initial nucleon to the outgoing fast nucleon is close to zero. The goal of these experiments is to extract the additional information about the spin-dependent part of the elementary np ^ pn amplitude from the nucleon—deuteron reaction. First this idea was suggested by Pomeranchuk [3] already in 1951. Later, it was shown that in the plane-wave impulse approximation (PWIA) the differential cross section and tensor analyzing power T20 in the dp charge-exchange reaction are actually fully determined by the spin-dependent part of the elementary np ^ pn amplitudes [2, 4].

However, the relative momentum of the two slow nucleons is very small under such kinematical conditions, where momentum of the emitted fast nucleon has the same direction and magnitude as the beam (in the deuteron rest frame). As a consequence, the final-state interaction (FSI) effects have to play very important role. How much is the FSI influence? It is the general question of our consideration in this paper.

We consider the nd ^ pnn reaction in kinematics of the DELTA SIGMA experiment, where the outgoing proton has the same direction as the projectile neutron and transfer momentum is close to zero. The neutron-beam kinetic energy changes from 0.8 up

to 1.3 GeV. The theoretical approach is based on the Alt—Grassberger—Sandhas (AGS) formulation of the multiple-scattering theory for the three-nucleon system. We apply the matrix inversion method to describe the FSI contributions. Earlier, this formalism has been employed for description of the dp breakup in the GeV region [5, 6]. All calculations have been performed in the deuteron rest frame. The results obtained in the present paper are very interesting, from our point of view, and useful for further investigation of this problem.

The paper is organized as follows. The theoretical formalism is given in Section 2 in which we consider both the general description of the nd breakup reaction and the special case, where transfer momentum is close to zero. The results are presented in Section 3. The ratio of the nd ^ pnn differential cross section to the free-np-scattering differential cross section at d\ab = 0 has been studied. It is shown that FSI is very important, although the its contribution decreases with the energy increasing. In Section 4 the conclusions are given.

In accordance with the AGS formalism of the three-body collision theory [7, 8], the amplitude of the nd charge-exchange reaction,

is defined by the matrix element of the transition operator U01 :

The state 11(23)) corresponds to the configuration of nucleons 2 and 3 forming the deuteron state and nucleon 1 being the projectile, whereas the state <1231 represents the free motion of three nucleons after the reaction. The permutation operators for two nucleons (i, j) appear in this expression due to particle identity both in initial and final states.

Iterating the AGS equations up to the second-order terms, we can obtain the expression for the transition operator U01:

By definition, ts = t12 is a two-nucleon transition operator (the others can be obtained via cyclic permutations). Here, g0 is the free nucleon propagator:

with the kinetic-energy operator for the three-body system, K, and the on-shell energy E = E1 + E2 + + E3. Obviously, the term g-1 does not contribute to the on-shell amplitude (2).

Since we consider only such kinematical conditions when outgoing proton carries away significant part of the initial-neutron momentum, we can neglect the corrections due to the recoil reaction mechanism, where final fast proton leaves the deuteron without direct knockout. In addition, we ignore terms, which correspond to the double scattering with participation of a fast nucleon. Then, the matrix element Und^pnn can be approximated by

with the spherical harmonics Y^L and the Clebsh—Gordon coefficients in the standard form. In our calculations, we use the pole parametrization of the DWF [9]:

Inserting in Eq. (6) the unity

and using the definition of the DWF, (7), we get the following expression for the reaction amplitude:

where the operator g23(E — E1) is a free propagator for the (23) subsystem and the scattering operator t23(E — E1) satisfies the Lippmann—Schwinger (LS) equation with two-body force operator V23 as driving term:

The expression (4) can be schematically presented by the set of graphs (Fig. 1). Here, two first terms correspond to the PWIA and the others represent the scattering with FSI of the slow nucleons. Let us rewrite the matrix element (4) indicating explicitly the particle quantum numbers,

where mN is the nucleon mass, S corresponds to the spin of the two slow nucleons which participate in the FSI. We have introduced here the momentum transfer q = p — pi, relative momenta po = |(p2 —

Fig. 1. Graphic representation of the amplitude of the nd ^ pnn reaction.

The two-slow-neutron interaction is described by the wave function

The radial part of this wave function ^O1 ('p'0) can be expressed by a series of 5 functions:

This wave function contains the FSI part, which can be taken into account in different ways.

In the present paper we use the matrix inversion method (MIM) suggested in [10, 11] and applied to study the deuteron electrodisintegration [12, 13] and dp breakup process [5, 6]. As in [12], we consider the truncated partial-wave expansion,

where Jmax is the maximum value of the total angular momentum in nn partial waves and a = {J,S,T} is the set of conserved quantum numbers.

Under kinematical conditions, where transfer momentum q = p — pi is close to zero, one can anticipate that the FSI in the 1S0 state is prevalent at comparatively small p0 values. Then two-neutron wave function is

where pj (j = 1 ,...,N) are the grid points associated with the Gaussian nodes over the interval [—1,1] with dimension equal to N and pN+1 = p0. The coefficients C(j) are determined from the solution of the system of linear algebraic equations approximately equivalent to the LS equation for two-neutron scattering [14].

In such a way we get the following expression for the amplitude of the nd charge-exchange process [6]:

Since q,'po <p,pi, we can neglect the q and po dependences of the high-energy np t matrix in Eqs. (13), (14). Besides, the integrand in Eq. (14) is suppressed at high p0. It offers us the opportunity to consider np — pn vertex as the free np scattering at angle 9* = n in the center-of-mass system (c.m.s.) (or np — pn at 9iab = 0). As well known, the NN t matrix is described in collinear geometry by the three independent amplitudes: