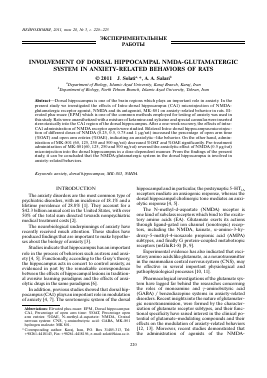 Abstract—Dorsal hippocampus is one of the brain regions which plays an important role in anxiety. In the present study we investigated the effects of Intra-dorsal hippocampus (CA1) microinjection of NMDA-glutamatergic receptor agonist, NMDA and its antagonist, MK-801 on anxiety-related behavior in rats. Elevated plus-maze (EPM) which is one of the common methods employed for testing of anxiety was used in this study. Rats were anaesthetized with a mixture of ketamine and xylazine and special cannulas were inserted stereotaxically into the CA1 region of the dorsal hippocampus. After a one-week recovery, the effects of intra-CA1 administration of NMDA receptor agents were studied. Bilateral Intra-dorsal hippocampus microinjection of different doses of NMDA (0.25, 0.5, 0.75 and 1 ^g/rat) increased the percentage of open arm time (%OAT) and open arm entries (%OAE), indicating an anxiolytic—like behavior. On the other hand, administration of MK-801 (60, 125, 250 and 500 ng/rat) decreased %OAT and %OAE significantly. Pre-treatment administration of MK-801(60, 125, 250 and 500 ng/rat) reversed the anxiolytic effect of NMDA (0.5 ^g/rat) microinjection into the dorsal hippocampus in a dose-dependent manner. From the findings of the present study, it can be concluded that the NMDA-glutamatergic system in the dorsal hippocampus is involved in anxiety-related behaviors.

The anxiety disorders are the most common type of psychiatric disorders, with an incidence of18.1% and a lifetime prevalence of 28.8% [1]. They account for a $42.3 billion annual cost in the United States, with over 50% of the total sum directed towards nonpsychiatric medical treatment costs [2].

The neurobiological underpinnings of anxiety have recently received much attention. These studies have produced findings that are important to make hypotheses about the biology of anxiety [3].

Studies indicate that hippocampus has an important role in the process of behaviors such as stress and anxiety [4, 5]. Functionally, according to the Gray's theory, the hippocampus acts in concert to control anxiety, as evidenced in part by the remarkable correspondence between the effects of hippocampal lesions in traditional aversive learning paradigms and the effects of anxi-olytic drugs in the same paradigms [6].

In addition, previous studies showed that dorsal hippocampus (CA1) plays an important role in modulation of anxiety [4, 7]. The serotonergic system of the dorsal

hippocampal and in particular, the postsynaptic 5-HT1A receptors mediate an anxiogenic response, whereas the dorsal hippocampal cholinergic tone mediates an anxi-olytic response [4, 5].

Experimental evidence has also indicated that excitatory amino acids like glutamate, as a neurotransmitter in the mammalian central nervous system (CNS), may be effective in several important physiological and pathophysiological processes [10, 11].

Pharmacological investigations of the glutamate system have lagged far behind the researches concerning the roles of monoamine and y-aminobutyric acid (GABA) / benzodiazepine systems in anxiety-related disorders. Recent insights into the nature of glutamater-gic neurotransmission, were formed by the characterization of glutamate receptor subtypes, and their functional specificity have raised interest in the clinical potential of glutamate-modulating compounds and their effects on the modulation of anxiety-related behaviors [12, 13]. Moreover, recent studies demonstrated that the administration of agonists of the NMDA-

glutamatergic receptor, affects on anxiety behaviors in the animal models of anxiety [10, 14].

A novel avenue of neuroscience research involves the glutamate system, the major excitatory neurotransmitter in the mammalian brain. Given that many stress-and anxiety-related disorders are posited to stem from the excessively responsive or hyperexcitable brain circuits, investigations of the role of glutamate in anxiety disorders and of drugs that modulate glutamatergic function have the potential to improve our understanding and then treatment of these severe and disabling illnesses [15].

In the present study, we studied the effects of the bilateral injection of the NMDA receptor agonist (NMDA) and antagonist (MK-801) into the dorsal hippocampus on the modulation of anxiety-related behaviors in the elevated plus-maze (EPM).

Adult male Wistar rats, were obtained from Pasteur Institute of Iran (Tehran, Iran), weighing 200—240 g at the time of surgery. The animals were housed in polycarbonate cages (4 per cage) during experiment. Rats were kept in a room with a 12:12 h light / dark cycle (lights on 07:00—19:00 h), controlled temperature (23 ± 1°C) and allowed to adapt to the laboratory conditions for at least 1 week before surgery. Food and water were freely available except for during the brief test periods. Each animal was handled about 3 min/day during the seven days preceding the test. All experiments were conducted between 12:00 h and 16:00 h and each rat was tested only once. There were 7 rats in each group.

Rats were anesthetized with the intraperitoneal (i.p.) injection of a mixture of ketamine hydrochloride (50 mg/kg, Alfasan, Woerden-Holland) plus xylazine (4 mg/kg, Alfasan, Woerden-Holland) and placed in a Stoelting stereotaxic instrument. The stainless steel guide cannula (21-gauge) was implanted in the right and left CA1 regions according to Paxinos and Watson (2007) [16]. Stereotaxic coordinates for the CA1 regions were: — 3.8 mm posterior to bregma, ±2 mm lateral to the midline and — 3 mm ventral of the dorsal surface of the skull. The cannula was fixed to the skull with acrylic dental cement. The animals were allowed a 7-day recovery period before initiation of experiments. The left and right CA1 were infused by means of an internal cannula (27-gauge), terminating 1 mm below the tip of the guides, connected by polyethylene tubing to a 1 |l Hamilton syringe. On each side, 0.5 |l solution was injected (1 |l/rat) during a 60-second period. The inner cannula was left in place for another 60 s to allow the complete diffusion of the solution and to reduce the

possibility of reflux. Intra-CA1 injections were made 5 min before testing.

The EPM was a plus-shaped apparatus, made of wood and elevated to a height of 50 cm above the ground. This apparatus consisted of a central platform (10 cm x 10 cm), two open arms (50 cm x 10 cm), and two equall closed arms (50 cm x 10 cm x 50 cm) opposite to each other with an open roof. The maze was placed in the center of a quiet and dimly lit room. The rat's behavior was directly observed using a mirror, suspended at an angle above the maze. Behavioral data were collected by a "blind" observer using a chronometer and quietly sat at the distance of a 1 m behind one of the closed arms of the maze, Five minutes following their respective drug treatments, rats were placed individually in the center of the plus-maze, facing to one of the closed arms. The observer measured (1) time spent in the open arms, (2) time spent in the closed arms,

(3) number of entries into the open arms, and finally

The drugs used in the present study were N-methyl-DL-aspartic Acid (NMDA) and MK-801 hydrogen maleate (Sigma Chemical Co., USA). All drugs were dissolved in sterile 0.9% saline. The solutions were prepared immediately before use and control animals received saline.

Experiment 2: Effects of MK-801 alone or in combination with NMDA on anxiety-related behavior. At first, five groups of rats received saline (1 |l/rat, intra-CA1). After three minutes, one of these groups received saline once again (1 | l/rat) and the other ones received differ-