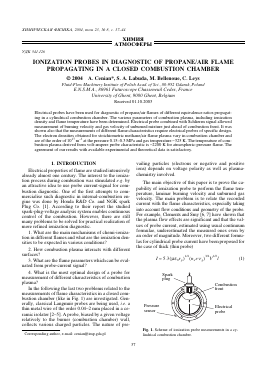 Electrical probes have been used for diagnostic of propane/air flames of different equivalence ratios propagating in a cylindrical combustion chamber. The various parameters of combustion plasma, including ionization density and flame temperature have been determined. Electrical probe combined with Schlieren signal allowed measurement of burning velocity and gas velocity of unburned mixture just ahead of combustion front. It was shown also that the measurements of different flame characteristics require electrical probes of specific design. The electron densities obtained for stoichiometric methane/air flame plasma vary in combustion chamber and are of the order of 1017 m-3 at the pressure 0.15-0.3 MPa and gas temperature ~325 K. The temperature of combustion plasma derived from volt-ampere probe characteristic is ~2200 K for atmospheric-pressure flame. The agreement of our results with available experimental and theoretical data is satisfactory.

Electrical properties of flame are studied intensively already almost one century. The interest to the ionization process during combustion was stimulated e.g. by an attractive idea to use probe current-signal for combustion diagnostic. One of the first attempts to commercialise such diagnostic in internal-combustion engine was done by Honda R&D Co. and NGK spark Plug Co. [1]. According to their report the studied spark-plug-voltage analysis system enables continuous control of the combustion. However, there are still many problems to be solved for practical realization of more refined ionization diagnostic.

1. What are the main mechanisms of chemi-ioniza-tion in different flames and what are the ionization densities to be expected in various conditions?

3. What are the flame parameters which can be evaluated from probe-current signal?

4. What is the most optimal design of a probe for measurement of different characteristics of combustion plasma?

In the following the last two problems related to the measurements of flame characteristics in a closed combustion chamber (like in Fig. 1) are investigated. Generally, classical Langmuir probes are being used, i.e. a thin metal wire of the order 0.04-2 mm placed in a ceramic isolator [2-5]. A probe, biased by a given voltage relatively to the burner (combustion chamber) wall, collects various charged particles. The nature of pre-

The main objective of this paper is to prove the capability of ionization probe to perform the flame temperature, laminar burning velocity and unburned gas velocity. The main problem is to relate the recorded current with the flame characteristics, especially taking into account flow conditions and geometry of the probe. For example, Clements and Smy [6, 7] have shown that the plasma flow effects are significant and that the values of probe current, estimated using usual continuum formulae, underestimated the measured ones even by an order of magnitude. Moreover, two different formulas for cylindrical probe current have been proposed for the case of thick (thin probe)

Fig. 2. Design of ionization probes used in the experiment.

I ~ v g V l with quite complicated dependence upon r

The characteristics of a propane/air flame propagating in a cylindrical combustion chamber (Fig. 1), 80 mm in diameter and 20 mm in height, were studied. This geometry is in some sense similar to a conventional cylinder of an automotive engine. The chamber was equipped with two optical windows, vacuum-tightly connected to both ends. The pressure evolution of a gas mixture ahead of combustion front was recorded by a piezoelectric, quartz pressure sensor (101A06 ICP® sensor of PCB Piezotronics) designed for dynamic measurements of compression.

Figure 2 presents ionization probes of different design used in various experiments. Their more detailed description will be given in the following chapters.

The flame front arrival to different space points of the combustion chamber was detected by a system of three parallel probes of different length (see Fig. 3). Each probe consists of molybdenum wire of 0.5 mm in diameter inserted in a ceramic pipe 2 mm of external diameter. The tip of molybdenum wire (~1mm in length) is uncovered constituting the "effective length" of the probe. This part of the probe collects charged particles in a flame front. The distance between the centers of the probes mounted in a holder was 3 mm.

The electrical circuit to detect ionization-probe signal is presented in Fig.4. Each probe was biased by + 100 V stabilized DC voltage. A typical signal of probe current is shown in Fig. 5. Each peak reflects flame front arrival to the spatial location of ionization probe. The peak amplitudes depend on local combustion conditions (pressure, temperature, etc.).

The electrical circuit can be modified by applying a voltage only to the longest probe. In that case, three peaks of current signal will also appear but with decreasing amplitudes. It should be noted that both electrical circuits were successfully applied to detect flame front arrival and to measure flame propagation velocity.

AND VELOCITY OF GAS JUST AHEAD OF COMBUSTION FRONT

The burning velocity Vf and the unburned gas velocity Vg can be derived by analyzing combined probe and Schlieren signals [8]. The experimental set-up and the applied optical scheme are shown in Fig.6. The negatively biased probe (-100 V), with a circular flat (2 mm in diameter) collecting-surface of the probe edge, was used. The collecting surface was oriented perpendicularly to the direction of flame-front propagation. The relative alignment of the ionization probe and a He-Ne laser beam is presented in Fig. 6.

Generally, the flame front propagates with the velocity Vs = Vf + Vg; whereas in the vicinity of the tip of the ionization probe Vs = Vf, i.e. the flow stagnates (Vg = 0). From the duration of the Schlieren signal, Ts,

and the measured value of Vs (equal Vf + Vg) the thickness of the combustion front is calculated as o = VsTs. Assuming that the flame front thickness is independent of the gas velocity ahead of the front, the value of Vf can be deduced from the duration of the ion current signal TL: Vf = S/tl. It is also assumed that a flame-wall quenching at the surface of the electrical-probe tip does not affect the burning-velocity measurements. Typical electrical probe and Schlieren signals are presented in Fig. 7.

Following the described above procedure, the velocities Vf and Vg were determined as functions of flame radius R (distance from the ignition point). Some chosen results are shown in Fig. 8, i.e. for the initial gas pressures P0 = 0.1013 MPa, temperature T0 = 298 K, flame radius R = 40 mm and equivalence ratio in the range 0.7 < ^ < 1.5. It should be mentioned that the instantaneous parameters (measured in the space ahead of combustion front) of a gas mixture change, as the flame-front propagates through the chamber. For example pressure and temperature vary in the range 0.14 < P < 0.155 MPa and 328 < T < 335 K, for R = 40 mm and all considered equivalence ratios of the gas mixture. The values presented in Fig. 8 agree reasonably well with those reported in the literature.

In order to diminish influence of fluctuations and flame instability, the values of Vf, Vg and o were averaged over 5-10 measurements for each equivalence ratio. The presented solid curves fit mean values. The fluctuations of flame propagation velocity should be related to differences in the ignition conditions, flame straining and non-spherical relief of combustion front. It is why the maximum of scattering in experimental data occurs for the probe placed close to the ignitor (R < 25 mm).

5. MEASUREMENTS OF IONIZATION DENSITY IN FLAME

Ionization density is a one of the basic flame characteristics. To estimate electron density of combustion plasma, a new procedure has been applied and a special electrical probe was designed for the measurements in