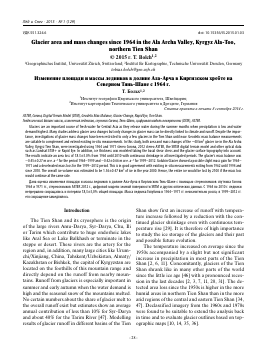 Glacier area and mass changes since 1964 in the Ala Archa Valley, Kyrgyz Ala-Too,

Glaciers are an important source of fresh water for Central Asia as they release water during the summer months when precipitation is low and water demand highest. Many studies address glacier area changes but only changes in glacier mass can be directly linked to climate and runoff. Despite the importance, investigations of glacier mass changes have been restricted to only a few glaciers in the Tien Shan until now. Geodetic mass balance measurements are suitable to complement and extend existing in-situ measurements. In this study, both area and mass changes of the ~40 km2 glacier ice in the Ala Archa Valley, Kyrgyz Tien Shan, were investigated using 1964 and 1971 stereo Corona, 2012 stereo ASTER, the SRTM digital terrain model and other optical data such as Landsat ETM+ or Rapid Eye. In addition, ice thickness was modeled taking the basal shear stress and the glacier surface topography into account. The results indicate an area loss of 18.3±5.0% from 1964 until 2010 with continuous shrinkage in all investigated periods. The glacier's mass balance was -0.45±0.27 m w.e. a-1 for the period 1964-1999 and -0.42±0.66 m w.e. a-1 for 1999-2012. Golubin Glacier showed a possible slight mass gain for 19641971 and a decelerated mass loss for the 1999-2012 period. This is in good agreement with existing in-situ measurements exiting from 1962 until 1994 and since 2010. The overall ice volume was estimated to be 1.56±0.47 km3 of ice in the year 2000. Hence, the entire ice would be lost by 2100 if the mass loss would continue at the same rate.

The Tien Shan and its cryosphere is the origin of the large rivers Amu-Darya, Syr-Darya, Chu, Ili or Tarim which contribute to huge endorheic lakes like Aral Sea or Lake Balkhash or terminate in the steppe or desert. These rivers are the artery for the region and, in addition, many large cities like Urum-chi/Xinjiang, China, Tahskent/Uzbekistan, Almaty/ Kazakhstan or Bishkek, the capital of Kyrgyzstan are located on the foothills of this mountain range and directly depend on the runoff from nearby mountains. Runoff from glaciers is especially important in summer and early autumn when the water demand is high and the seasonal snow of the mountains melted. No certain numbers about the share of glacier melt to the overall runoff exist but estimates show an average annual contribution of less than 10% for Syr-Darya and about 40% for the Tarim River [47]. Modelling results of glacier runoff in different basins of the Tien

Shan show first an increase of runoff with temperature increase followed by a reduction with the continued glacier shrinkage even with continuous temperature rise [29]. It is therefore of high importance to study the ice storage of the glaciers and their past and possible future evolution.

The temperature increased on average since the 1950s accompanied by a slight but not significant increase in precipitation in most parts of the Tien Shan [2, 6, 11]. Concomitantly, glaciers of the Tien Shan shrank like in many other parts of the world since the little ice age [46] with a pronounced recession in the last decades [2, 3, 7, 11, 20, 31]. The detected area loss since the 1950s is higher in the more humid areas in northern Tien Shan than in the more arid regions of the central and eastern Tien Shan [34, 47]. Declassified imagery from the 1960s and 1970s were found to be suitable to extend the analysis back in time and to evaluate glacier outlines based on topographic maps [10, 14, 35, 36].

Area changes show an indirect signal to climate while the glacier mass balance can more directly be related to climate and hydrology. Existing mass balance measurements in the Tien Shan indicate a pronounced mass loss since the mid- 1970s which is highest at Tuyuksu Glacier situated in Ile Alatau (also: Zailijskij Alatau) at the northern margin of the Tien Shan [17, 50]. However, mass balance measurements exist just for a few glaciers and only Tuyuksu Glacier and Urumchi Glacier No. 1 in eastern Tien Shan were measured continuously. Several other measurements, such as at Abramov Glacier (Pamir Alay, southern Kyrgyzstan) and Karabatkak Glacier (Terskey Alatau) were interrupted since the collapse of the Soviet Union. Between 1968 and 1994 in-situ measurements were also performed at Golubin Glacier in Ala Archa Valley/ Kyrgyz Alatau [1, 50]. The mass balance was found to be predominantly negative. Mass balance measurements at Golubin Glacier were re-established in 2010 and showed a slightly positive value for 2010/2011 [50]. However, no mass balance information exists between 1994 and 2010.

Geodetic mass balance estimations are suitable to evaluate, complement and extend existing in-situ measurements [15, 51]. National digital elevation models (DEMs), the near global SRTM3 DEM, as well as DEMs derived from optical stereo data such as SPOT, ASTER or Corona were found to be suitable for this task [9, 15, 41]. However, careful co-registration and an estimation of the penetration of the SRTM C-band radar beam into snow and ice are required to reduce uncertainties [12, 24, 37, 42].

A prerequisite for hydrologic and glaciological modelling purposes is not only the knowledge about the change in volume but also about the glacier volume and its distribution over the glaciers. The glacier thickness can be measured in the field e.g. using ground penetrating radar (GPR). This is, however, only feasible for a small numbers of glaciers. Simple models are required to estimate the current and future glaciers volume for a large number of glaciers simultaneously. Promising approaches to model the glacier bed topography based on the surface topography, glacier outlines and possibly additional information about glacier mass turnover and the mass balance gradient [22, 33].

for different periods between 1964 and 2012 using remote-sensing derived information.

The KyrgyzAla-Too (Kyrgyz Range) represents the north-western part of Tien Shan with an east-west extent of over 400 km [5]. The water released at the northern slope drains into the river Chu which is the main artery for the (semi-) arid lowlands in Kyrgyzstan and Kazakhstan including Bishkek, the capital of Kyrgyzstan. At its northern slope, 40 km south of Bishkek, the study area of this work can be found: the Ala Archa National Park (74°24' E - 74°34' E; 42°24' N — 42°36' N, Fig. 1). This nature reserve was established in 1976 and constitutes a total area of 194 km2 and extends along the Ala-Archa river basin and the surrounding with altitudes ranging from 1,500 m at its entrance up to 4,895 m at Semeno-va-Tyan-Shanskogo Peak. Glaciers cover an area of ~33.3 km2 and extend over an altitude range of 3,310—4,760 m (2010). The annual precipitation increases from less than 400 mm, measured at Bishkek station at an elevation of 771 m asl., to about 700 mm at the glaciers [1]. The maximum precipitation occurs in late spring to early summer (see Fig. 1).

Declassified stereo Corona KH-4A and KH-4B images were used to obtain the glacier area and surface elevation for the years 1964 and 1971 (Table 1). Corona was a spy satellite mission operating from 1960 until the mid- 1970s and was mainly designed to acquire images of the former USSR and other communist countries, such as China [34]. The images have a relatively high resolution of ~7 m (KH-4) and up to 2 m (KH-4B). The main disadvantages are the panoramic distortion and unstable acquisition parameters [19]. The utilized images were acquired at the end of the ablation season and had suitable sow conditions. Few clouds occurred at the 1964 images but all glaciers were cloud free except Golubin Glacier where the very distal part of the tongue was hidden. The 1971 data only cover a smaller part of the study region and only Golubin Glacier was investigated with the 1971 DTM data. Further data used are the widespread Landsat images which are freely available in an orthorectified level (www.usgs.gov). The most recent glacier extents were delineated from 2010 Rapid Eye data which has