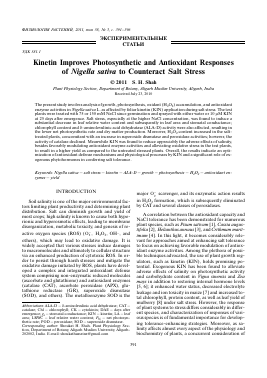 The present study involves analysis of growth, photosynthesis, oxidant (H2O2) accumulation, and antioxidant enzyme activities in Nigella sativa L. as affected by foliar kinetin (KIN) application during salt stress. The test plants were treated with 75 or 150 mM NaCl since germination and sprayed with either water or 10 цМ KIN at 25 days after emergence. Salt stress, especially at the higher NaCl concentration, was found to induce a substantial decrease in leaf relative water content and subsequently in leaf area and stomatal conductance; chlorophyll content and 8-aminolevulinic acid dehydratase (ALA-D) activity were also affected, resulting in the lower net photosynthetic rate and dry matter production. Moreover, H2O2 content increased in the salt-treated plants, concomitant with an increase in superoxide dismutase and peroxidase activities; however, the activity of catalase declined. Meanwhile KIN was found to reduce appreciably the adverse effects of salinity, besides favorably modulating antioxidant enzyme activities and alleviating oxidative stress in the test plants, to result in a higher yield as compared to the untreated stressed plants. Overall, the results indicate an optimization of antioxidant defense mechanisms and physiological processes by KIN and a significant role of exogenous phytohormones in conferring salt tolerance.

Soil salinity is one of the major environmental factors limiting plant productivity and determining plant distribution. Salt can diminish growth and yield of most crops; high salinity is known to cause both hypertonic and hyperosmotic effects, leading to membrane disorganization, metabolic toxicity, and genesis of reactive oxygen species (ROS) (O2, H2O2, OH-, and others), which may lead to oxidative damage. It is widely accepted that various stresses induce damages to macromolecules and ultimately to cellular structure via an enhanced production of cytotoxic ROS. In order to persist through harsh stresses and mitigate the oxidative damage initiated by ROS, plants have developed a complex and integrated antioxidant defense system comprising non-enzymatic reduced molecules (ascorbate and glutathione) and antioxidant enzymes (catalase (CAT), ascorbate peroxidase (APX), glutathione reductase (GR), superoxide dismutase (SOD), and others). The metalloenzyme SOD is the

major O2 scavenger, and its enzymatic action results in H2O2 formation, which is subsequently eliminated by CAT and several classes of peroxidases.

A correlation between the antioxidant capacity and NaCl tolerance has been demonstrated for numerous plant species, such as Pisum sativum [1], Cassia augus-tifolia [2], Helianthus annuus [3], and Crithmum marit-imum [4]. In this light, it becomes considerably relevant for approaches aimed at enhancing salt tolerance to focus on achieving favorable modulation of antiox-idant enzyme activities. Among the plethora of possible techniques advocated, the use of plant growth regulators, such as kinetin (KIN), holds promising potential. Exogenous KIN has been found to alleviate adverse effects of salinity on photosynthetic activity and carbohydrate content in Vigna sinensis and Zea mays in addition to restoring internal hormone levels [5, 6]; it enhanced water status, decreased electrolyte leakage and ion toxicity in maize [7] and increased total chlorophyll, protein content, as well as leaf yield of mulberry [8] under salt stress. However, the response of plant systems to stress differs considerably in different species, and characterization of responses of various species is of fundamental importance for developing tolerance-enhancing strategies. Moreover, as salinity affects almost every aspect of the physiology and biochemistry of plants, a concurrent consideration of

In view of these facts, the present study was designed to investigate the responses of growth, photosynthesis, and antioxidant enzymes of Nigella sativa to foliar KIN application during salt stress. N. sativa (black cumin) is a greatly demanded medicinal herb and a rich source of antioxidants and essential fatty acids. The remarkable aromatic and remedial properties of its seed oil render a valuable source of foreign exchange. However, its large scale commercial cultivation is complicated by the scarcity of good quality soils amid widespread salinity and the lack of information regarding its responses to salt stress and subsequent hormone application. The results of the present study explain the concurrently occurring responses of physiological and defense mechanisms to foliar KIN during salt stress and contribute to our knowledge of the possible role of exogenous phytohormones in adaptation to salinity of an economically and ecologically important herb.

Plant material and growth conditions. The pot experiment was laid down according to completely randomized block design with five replications. Earthen pots (25 cm diameter) were lined with polythene sheets and filled with 9 kg of acid washed sand. Pure strains of Nigella sativa L. were obtained from the Regional Research Institute of Unani Medicine, Aligarh. The seeds were surface-sterilized with 0.01% HgCl2 solution, rinsed with double distilled water, and subsequently sown in the pots. Five uniform plants per pot were maintained and grown under natural day/night conditions with an average daylength of 12-h, maximum and minimum temperatures of 23.2 and 17.4°C, respectively, and relative humidity of 64 and 52%, respectively, at midday, during the experimental period. The photo-synthetic photon flux density (PPFD) at maximum plant height was approximately 1400 ^mol/(m2 s).

Treatments. Each pot was fed every week with 200 ml of full-strength Hoagland solution containing

6 mM of N O 3 as the sole N source. This was continued until germination, after which the salt treatment was initiated. Concentrations of 0, 75, or 150 mM of NaCl were maintained in the Hoagland solution during the experimental period. The electrical conductivity of different salinity levels was adjusted by direct measurements with a conductivity meter. At 25 days after emergence (DAE) (vegetative stage), each plant was sprayed with 5 ml of10 ^M KIN ("Sigma", United States). The KIN concentration and optimum developmental stage for spraying have been determined in previous experiments [9, 10]. The control plants were sprayed with double distilled water.

LA per plant was measured using a leaf LI-3000 area meter ("LI-COR", United States). Dry weight (g/plant) (of all the aboveground plant tissues) was determined on oven-dried plant material (80°C for 48 h). Leaf relative water content was measured by the method of Yamasaki and Dillenburg [11]. For each treatment, ten leaves were taken. To minimize the age effect, leaves were collected from the mid-section of the plant. To obtain their fresh weight (FW), the leaves were weighed just after removal from the stem. To determine turgid weight (TW), the leaves were kept in double distilled water inside a petri dish covered with its lid for 4 h. Afterwards, the water was gently wiped out from the leaf surface with tissue paper, and the leaves were weighed. To determine dry weight (DW), leaf samples were dried at 80°C for 24 h. Values for FW, TW, and DW were used to calculate LRWC using the equation:

Total Chl content was estimated following the method of Mackinney [12]. For determination of ALA-D activity, samples were homogenized in chilled acetone, filtered through a Büchner funnel, and washed with chilled acetone. The residues were spread on filter papers and allowed to dry at room temperature. An aliquot of the acetone powder (0.5 g) was mixed with 25 ml of 0.05 M Tris-HCl buffer (pH 9.0) for 10 min at 4°C and then centrifuged at 48200 g for 15 min at 4°C; the supernatant was used as enzyme extract. The activity was assayed in 4 ml of the incubation mixture containing 3.6 ml of the enzyme extract and 0.4 ml of 5 mg/ml ALA in Tris-HCl buffer (pH 7.0). The mixtures were incubated at 34°C for 1 h, and then reaction was stopped by adding 2 ml of 0.1 M HgCl2 in 10% CCl3COOH. The quantity of porphobilinogen (PBG) formed in the reaction with dimethylami-nobenzoic acid was determined spectrophotometri-cally at 555 nm [13].

PN and gs were recorded using a portable infrared gas analyzer (LICOR-6200) on the fully expanded, uppermost leaf of the main plant axis, between 11:00 and 12:00