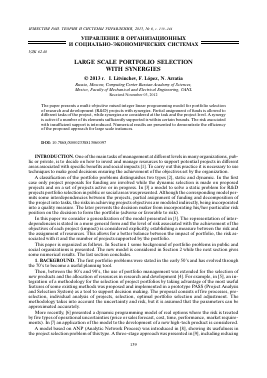 The paper presents a multi-objective mixed integer linear programming model for portfolio selection of research and development (R&D) projects with synergies. Partial assignment of funds is allowed to different tasks of the project, while synergies are considered at the task and the project level. A synergy is active if a number of its elements sufficiently supported is within certain bounds. The risk associated with insufficient support is introduced. Numerical results are presented to demonstrate the efficiency of the proposed approach for large scale instances.

INTRODUCTION. One of the main tasks of management at different levels in many organizations, public or private, is to decide on how to invest and manage resources to support potential projects in different areas associated with specific benefits and social impacts [1]. To carry out this practice it is necessary to use techniques to make good decisions ensuring the achievement of the objectives set by the organization.

A classification of the portfolio problems distinguishes two types [2], static and dynamic. In the first case only project proposals for funding are involved while the dynamic selection is made on proposed projects and on a set of projects active or in progress. In [3] a model to solve a static problem for R&D projects portfolio selection in public or social areas was presented. Although the corresponding model permits some interdependencies between the projects, partial assignment of funding and decomposition of the project into tasks, the risks in achieving projects objectives are modeled indirectly, being incorporated into a quality measure. The later prevents the decision maker from incorporating his/her particular risk position on the decision to form the portfolio (adverse or favorable to risk).

In this paper we consider a generalization of the model presented in [3]. The representation of inter-dependencies is stated in a more general form and the level of risk associated with the achievement of the objectives of each project (impact) is considered explicitly, establishing a measure between the risk and the assignment of resources. This allows for a better balance between the impact of portfolio, the risk associated with it and the number of projects supported by the portfolio.

This paper is organized as follows. In Section 1 some background of portfolio problems in public and social organizations is presented. The new model is considered in Section 2 while the next section gives some numerical results. The last section concludes.

1. BACKGROUND. The first portfolio problems were stated in the early 50's and has evolved through the 70's to become a useful planning tool.

Then, between the 80's and 90's, the use of portfolio management was extended for the selection of new products and the allocation of resources in research and development [4]. For example, in [5], an integration of a methodology for the selection of project portfolios by taking advantage of the most useful features of some existing methods was proposed and implemented in a prototype PASS (Project Analysis and Selection System) as a tool to support decision making. The proposal consists of five processes, preselection, individual analysis of projects, selection, optimal portfolio selection and adjustment. The methodology takes into account the uncertainty and risk, but it is assumed that the parameters can be approximated accurately.

More recently, [6] presented a dynamic programming model of real options where the risk is treated by five types of operational uncertainties (price or sales forecast, cost, time, performance, market requirements). In [7] an application of the model to the development of a new high-tech product is considered.

A model based on ANP (Analytic Network Process) was introduced in [8], showing its usefulness in the project selection problem of this type. A three-stage approach was presented in [9], including reducing

the number of projects, obtaining the solution space efficient portfolios by an integer linear programming model. Finally the decision maker is guided by an interactive system to ensure the preferences are correctly represented. The main limitation is the maximum thirty projects that can be handled in the second and the third phases.

A methodology for creating and evaluating balanced portfolios of R&D projects was considered in [10]. To address the variability of some characteristics in projects, thresholds are set and then calculated risk ratios, efficiency and balance. A fuzzy model to evaluate the value of each R&D project and improve their respective assessment of risk is presented in [11].

An integer nonlinear programming model for multiobjective selection and scheduling of project portfolios was presented in [12] for discrete allocation of resources, where heuristic algorithms and solution methodology were employed. Interdependencies of projects are considered that can produce additional effects on objectives and can result in increment or decrement of resources. The work was inspired by [9]. Perhaps the most notable feature of these two works is the representation of the synergies and the incorporation of multiple resources and benefit categories. However, the major limitation of these works is the number of candidates projects handled, which is no more than a hundred. In the model presented in this paper we are inspired by the representation of the synergies proposed in [12] extending their model to the level of tasks of the project.

A project selection model considering partial allocation of resources was considered in [13], while

Thus we may conclude that there is a wide variety of methodologies developed to address the problem of portfolio selection, each with specific techniques for the treatment of the issues associated with the portfolio. The main limitation is the number of projects handled in the experimentations, there are a few studies that consider more than 100 projects. Moreover, there are a few publications considering a partial allocation of resources. Below we consider generalization of the models presented in [3, 15] where portfolios with thousands candidate projects were handled successfully in the experimentation.

2. THE MODEL. It is assumed that there is a set of projects competing for funding in a number of areas of research and development, such that every project belongs to a single area. The project consists of a number of tasks and the project is supported if at least one of its task is supported.

The project is funded sufficiently if it receives support in a certain interval of funding. The corresponding benefit function increases linearly on this interval and is zero for funding below the minimal value (see

[15] for details). Sufficient funding for tasks is defined similarly.

To represent interdependency between different projects/tasks the concept of synergy is used. Generally speaking, synergy arises when the total indicator corresponding to elements (projects, tasks, etc.) from the synergy is different from the sum of indicators corresponding to the same elements considered independently. More specifically, synergy is interpreted as a set of tasks corresponding to certain projects that, being supported sufficiently, produce an effect of changing the benefit or increase/decrease of resources. In [3] it was assumed that synergy is activated if all its elements are funded sufficiently, i.e., cardinality of synergy coincides with that of the set of the elements funded. In this paper we use a more flexible definition ofsynergy. Similar to [12, 16] we say that synergy is activated ifa number ofits elements funded sufficiently is within certain bounds.