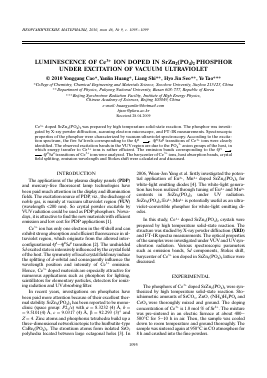 Ce3+ doped SrZn2(PO4)2 was prepared by high temperature solid-state reaction. The phosphor was investigated by X-ray powder diffraction, scanning electron microscope, and FT-IR measurements. Spectroscopic properties of the phosphor were characterized by vacuum ultraviolet spectroscopy. According to the excitation spectrum, the five 5d levels corresponding to the f —»- 4/°5d transitions of Ce3+ ions were clearly identified. The observed excitation bands in the VUV region are due to the PO43- anion groups of the host, in which energy transfer to Ce3+ ions is rather efficient. The emission bands corresponding to the 4f1 —»-—4f° 5d1 transitions of Ce3+ ions were analyzed. The barycenter of Ce3+ ions, host absorption bands, crystal field splitting, emission wavelength and Stokes shift were calculated and discussed.

The applications of the plasma display panels (PDP) and mercury-free fluorescent lamp technologies have been paid much attention in the display and illumination fields. The excitation source ofPDP, viz., the discharge of noble gas, is mainly at vacuum ultraviolet region (VUV) (wavelength <200 nm). So crystal powder excitable by VUV radiation could be used as PDP phosphors. Nowadays, it is attractive to find the new materials with efficient emission and low cost for PDP applications [1].

Ce3+ ion has only one electron in the 4f shell and can exhibit strong absorption and efficient fluorescence in ultraviolet region, which originate from the allowed inter-configurational 4f-—4f5dl transition [2]. The unshielded 5d excited state is intensively influenced by the crystal field ofthe host. The symmetry oflocal crystal field may induce the splitting of d-orbital and consequently influence the wavelength position and intensity of Ce3+ emission. Hence, Ce3+ doped materials are especially attractive for numerous applications such as phosphors for lighting, scintillators for elementary particles, detectors for ionizing radiation and UV absorbing filter.

In this study, Ce3+ doped SrZn2(PO4)2 crystals were prepared by high temperature solid-state reaction. The structure was studied by X-ray powder diffraction (XRD) and FT-IR spectra measurements. The optical properties of the samples were investigated under VUV and UV synchrotron radiation. Various spectroscopic parameters such as emission bands, 5d components, Stokes shift, barycenter of Ce3+ ion doped in SrZn2(PO4)2 lattice were discussed.

The phosphors of Ce3+ doped SrZn2(PO4)2 were synthesized by high temperature solid-state reaction. Stoichiometric amounts of SrCO3, ZnO, (NH4)H2PO4 and CeO2 were thoroughly mixed and ground. The doping concentration of Ce3+ is 1.0 mol % of Sr2+. The mixture was pre-sintered in an electric furnace at about 400— 500°C for 5—10 h in air. Then, the sample was cooled down to room temperature and ground thoroughly. The sample was sintered again at 950°C in CO atmosphere for 8 h and crushed into the fine powders.

XRD data were collected on a Rigaku D/Max diffrac-tometer operating at 40 kV 30 mA with Bragg—Brentano geometry using Cu^a radiation (k = 1.5405 A). The Per-kin Elmer 2000 FT-IR spectrophotometer was used to measure the FT-IR spectra in the 400—3000 cm-1 range using the KBr pellets.

The VUV excitation and emission spectra were measured in Beijing Synchrotron Radiation Facility of Institute of High Energy Physics. A 1 m Seya-Namioka monochromator and an Acton Spectra-308 mono-chromator were used for the measurement of excitation and emission spectra. The signal was detected by a Hamamatsu H5920-01 photon counter. In all measurements, the 280 nm cutoff filter was used for pre-

venting the incident light entering into the secondary monochromator and the pressure of the sample chamber was lower than 1 x 10-3 Pa.

Usually, the IR absorptions of (PO4)3- have two regions at 1120-940 and 650-540 cm-1 [5]. The FT-IR spectrum in Fig. 2 is characterized with two groups of IR absorption bands centered at 1050 and 565 cm-1, which can be assigned to symmetric stretching modes of the (PO4)3- units. Just like many other mono-phosphates with the PO4 tetrahedron, there is a broad absorption band in 1150-900 cm-1 region. The results show that all vibrations are due to the anion groups of PO4 units. The presence of the tetrahedrally coordinated PO4 units are important for the stabilization of Ce3+ by forming a rigid structure to prevent oxidization [6].

Figure 3 is the typical scanning electron microscope (SEM) micrographs of the SrZn2(PO4)2:Ce3+. It shows that the phosphors have short rod-shape with diameter of shorter than 1 ^m (see Fig. 3a). In the SEM micrograph of Fig. 3b with high magnification, it can be seen that, the

particles have a good quality of crystalline surface, which are possible to be used as an efficient PDP phosphor.

It is well known that the transitions of Ce3+ ions within the 4f configuration are the electric dipole forbidden transitions while transitions between the 4f levels and levels of the 4f"-15 d configuration are allowed with the decay times ofthe order oftens ofnanoseconds. The positions of the 4f-15d levels are much more influenced by the crystal field interaction and thus highly depend on the crystalline environment depending on compounds. The 4f configuration ofCe3+ has only one electron, and the irradiation of UV photon will excite the 4f electron into the 5d orbital, leaving the 4f shell empty. So, the excitation spectrum of Ce3+ shows the direct splitting information of5d orbital in the crystal field. It has been reported that the f—d transition of Ce3+ ion will exhibit a subtle structure due to the influence of crystal field splitting and spin-orbit coupling [7]. VUV excitation spectra can give some useful information such as 5d levels of Ce3+, host absorption and the energy transfer process from the host to Ce3+. When the Ce3+ ion is embedded in a crystalline host, the mean energy ofthe 5d configuration is shifted downward relative to the free ion value and the 5d levels split into five different crystal-field components.

anions in the host lattice in other phosphates and fluorophosphates [8-10]. Theoretical calculation has confirmed that the lowest intra-molecular 2t2 —» 2a, 3t2

intrinsic absorption of PO4 is located around this range. In this case, the excitation band of 120-185 nm in Fig. 4 can be assigned to the band gap transition, which corresponds to the valence band —.-conduction band interband transition of SrZn2(PO4)2. The onset of absorption at about 160 nm implies that the band gap ofSrZn2(PO4)2 is about 7.73 eV which is similar to that of REPO4 and A3RE(PO4)2-type (RE-rare earth, A-alkali metal ions) phosphates (7.6-8.3 eV) [12].