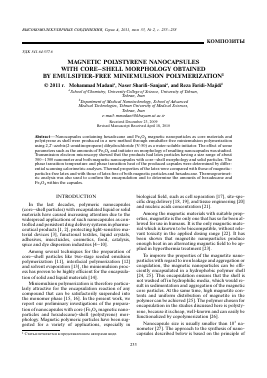 Abstract—Nanocapsules containing hexadecane and Fe3O4 magnetic nanoparticles as core materials and polystyrene as shell were produced in a new method through emulsifier-free miniemulsion polymerization using 2,2'-azobis(2-amidinopropane) dihydrochloride (V-50) as a water-soluble initiator. The effect of some parameters such as the amounts of Fe3O4 and initiator on morphology of resulting nanocapsules was studied. Transmission electron microscopy showed that the products had latex particles having a size range of about 300—1300 nanometer and both magnetic nanocapsules with core—shell morphology and solid particles. The phase transition temperature and phase transition heat of the produced capsules were determined by differential scanning calorimetric analyses. Thermal properties of the latex were compared with those of magnetic-particles-free latex and with those of latex free of both magnetic particles and hexadecane. Thermogravimet-ric analysis was also used to confirm the encapsulation and to determine the amounts of hexadecane and Fe3O4 within the capsules.

Among several techniques for the preparation of core—shell particles like two-stage seeded emulsion polymerization [11], interfacial polymerization [12] and solvent evaporation [13], the miniemulsion process has proven to be highly efficient for the encapsulation of solid and liquid materials [14].

Miniemulsion polymerization is therefore particularly attractive for the encapsulation reaction of any compound that can be satisfactorily suspended into the monomer phase [15, 16]. In the present work, we report our preliminary investigations of the preparation of nanocapsules with core (Fe3O4 magnetic nanoparticles and hexadecane)-shell (polystyrene) morphology. Magnetic polymeric particles have been suggested for a variety of applications, especially in

Among the magnetic materials with suitable properties, magnetite is the only one that has so far been allowed for use in humans. It is the only magnetic material which is known to be biocompatible, without relevant toxicity in the applied dosing range [22]. It has been shown that magnetite nanoparticles produce enough heat in an alternating magnetic field to be applied in hyperthermia treatment [23].

To improve the properties of the magnetite nanoparticles with regard to iron leakage and aggregation or coagulation, the magnetic nanoparticles can be efficiently encapsulated in a hydrophobic polymer shell [24, 25]. This encapsulation ensures that the shell is not washed off in hydrophilic media, which would result in sedimentation and aggregation of the magnetic core particles. At the same time, high magnetite contents and uniform distribution of magnetite in the polymer can be achieved [25]. The polymer chosen for encapsulation in the studies discussed here is polystyrene, because it is cheap, well-known and can easily be functionalized by copolymerization [26].

Nanocapsule size is usually smaller than 103 nanometer [27]. The approach to the synthesis of nano-capsules described below is based on the principle of

lab according to Reference [28], via coprecipitation of Fe+3 and Fe+2 ions in the presence of ammonium hydroxide and oleic acid.

emulsifier-free miniemulsion polymerization. Up to now, this kind of process has not been used for the preparation of magnetic nanocapsules.

In this work, encapsulation of magnetite nanoparticles and hexadecane with polystyrene was carried out using a new method based on emulsifier-free miniemulsion polymerization in the presence of 2,2'-azo-bis(2-amidinopropane) dihydrochloride (V-50) as a cationic ionizable water-soluble initiator and magnetic polymeric nanocapsules were synthesized and characterized by TEM, DSC and TGA.

The styrene and hexadecane were purchased from Merck Chemical Co. The styrene was purified by distillation under vacuum. The initiator, 2,2'-azobis(2-amidinopropane) dihydrochloride as V-50 was supplied by Organic Acros Co., stored at 4°C and used without further purification. The water was twice distilled. Oleic acid-coated magnetite nanoparticles with an average diameter of about 10 nm (Fig. 1) and containing 21.79 wt % of oleic acid were produced in our

The procedure for preparation of magnetic nano-capsules with core (Fe3O4 magnetic nanoparticles and hexadecane) — shell (polystyrene) morphology via emulsifier-free miniemulsion polymerization was as follows.

Various amounts of hydrophobic Fe3O4 magnetic nanoparticles, were dispersed in 6.00 g of styrene monomer and these mixtures were sonicated for 50 s to obtain a homogenous dispersion. The resultant stable oil-based dispersion was added to 100 mL of double distilled water containing various amounts of 2,2'-azo-bis(2-amidinopropane) dihydrochloride (V-50) as an initiator and 6 g of hexadecane. Then the mixtures were sonicated again at 90% output (400 W) for 15 min under argon. During sonication, the temperature of the mixture increased up to around 70—80°C and to prevent the evaporation of the mixture contents, the container was equipped with a condenser. After that, the miniemulsion obtained was polymerized in water bath at 70°C for 6 h. The used recipes for the emulsi-fier-free miniemulsion polymerizations are given in Table 1 (experiments M1-M4 and R1-R2).

Experiments V and K corresponded to emulsifier-free miniemulsion polymerization of styrene containing no magnetite and emulsifier-free miniemulsion polymerization of styrene free from magnetite and hexadecane, were carried out to compare them with M-series experiments. A CEM 902A ZEISS transmission electron microscope was used. Samples were prepared by placing a droplet (1 ^L) of polymer dispersion, along with a droplet of water, on a copper grid covered by formvar foil (200 mesh), dried and analyzed. Thermal properties of the dried samples were analyzed by TGA (TGAQ50, TA Instruments) and DSC (DSCQ100, TA Instruments) at 20°C/min and 10°C/min for heating rate, respectively, under inert gas of Ar.

Based on the theories and experimental data, a successful polymer encapsulation of iron oxide particles via miniemulsion polymerization requires these particles to be well dispersed in the monomer before emul-sification to be accommodated within the droplets. Since Fe3O4 nanoparticles are hydrophilic and styrene is a hydrophobic monomer, the polarity difference be-

tween them makes it difficult to disperse iron oxide nanoparticles in styrene without aggregation and phase separation. To improve dispersion, a surface treatment with oleic acid was performed to increase the hydrophobicity of the Fe3O4 nanoparticles. The average particle size of magnetite prepared in the present study was about 10 nm, which has been estimated by TEM (Fig. 1).

The processes of preparing the magnetic nanocap-sules proceed via three stages as described in Experimental Part. To examine the effect of various amounts

of magnetite and initiator on the morphology of the magnetic nanocapsules, a series of miniemulsions were prepared. The hexadecane level was kept constant while the amounts of magnetite and initiator were changed (0.05, 0.2, 0.3, 0.4, and 0.5 g for magnetite and 0.1, 0.15, and 0.2 g for initiator). Subsequent polymerization of the prepared miniemulsion led to production of opaque light brown latex and showed significant encapsulation of hexadecane and Fe3O4 within the capsules. TEM micrographs of the latex particles obtained from these experiments

Fig. 4. TEM micrograph of the capsule produced in

showed that the products had a size range of about 300—1300 nm and contained both magnetic capsules with core—shell morphology and PS solid particles as it is shown in Fig. 2. All particles are spherical in shape. The magnetite particles are visible as dark spots inside the spheric