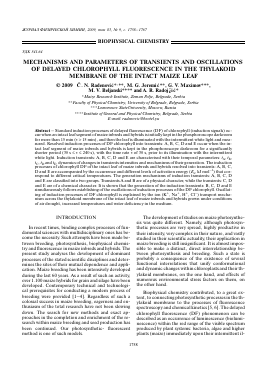 In recent times, binding complex processes of fundamental sciences with multidisciplinary ones has become the necessity. Such attempts have been made between breeding, photosynthesis, biophysical chemistry and fluorescence in maize inbreds and hybrids. The present study analyses the development of dominant processes of the stated scientific disciplines and determines the sites of their mutual dependence and application. Maize breeding has been intensively developed during the last 60 years. As a result of such an activity, over 1.100 maize hybrids for grain and silage have been developed. Contemporary technical and technological prerequisites for conducting a modern process of breeding were provided [1—4]. Regardless of such a colossal success in maize breeding, eagerness and enthusiasm of the total research have not been slowing down. The search for new methods and exact approaches in the completion and enrichment of the research within maize breeding and seed production has been continued. Our photosynthetic- fluorescent method is one of such models.

The development of studies on maize photosynthesis was quite different. Namely, although photosyn-thetic processes are very spread, highly productive in their intensity, very complex in their nature, and vastly studied in their scientific actuality, their application in maize breeding is still insignificant. It is almost impossible to make a distinct, direct interrelationship between photosynthesis and breeding. Such a state is probably a consequence of the existence of several functional interrelations that unify conformational and dynamic changes within chloroplasts and their thylakoid membranes, on the one hand, and effects of numerous environmental stress factors on them, on the other hand.

Biophysical chemistry contributed, to a great extent, to connecting photosynthetic processes in the thylakoid membrane to the processes of fluorescence spectroscopy and chemical kinetics [5, 6]. The delayed chlorophyll fluorescence (DF) phenomenon can be described as an occurrence of luminescence (bioluminescence) within the red range of the visible spectrum produced by plant systems: bacteria, algae and higher plants (maize) immediately upon their intermittent il-

lumination (excitation) (in case of maize upon illumination of the intact leaf) [5, 7—11]. DF was discovered by Strehler and Arnold (1951) [12] in their attempt to reveal a nature of induction illumination in a form of bioluminescence. Numerous studies, especially those of the last 25 years [7—11, 13—19], revealed the direct connection between DF and photosynthetic processes, in which DF was considered an unavoidable indicator — a susceptible "probe" for experimental photo-synthetic studies in the intact leaf of maize inbreds and hybrids [7—11, 16, 17, 20]. Today, as well as, in the near future, DF shall be an efficient tool, i.e. a modern methodological approach in studies of certain, often very complex photoprocesses in the light phase of photosynthesis. In relation to this approach, induction processes of chlorophyll DF, their resolution into several mutually dependent transients, generating of oscillations and rhythms and their correlation are considered actual scientific issues. Within the scope of the stated, issues on activation energy and critical temperatures within activities of the total induction processes of chlorophyll DF, arise. Hence, these issues and their mutual relations are an objective of the present study.

The studies were done with the intact leaf of the selected hybrids: ZPDC 370, ZPSC 46A, ZPSC 704 and ZPSC 71, and inbred lines: ZPR 70z and Oh 43, tolerant and resistant to effects of increased and high temperatures, as well as, drought. The test plants were grown in pots in the glass-house under conditions of controlled air drought and a reduced amount of water in the medium. The change in the temperature was controlled and it reached the level of 38°C, although it mostly ranged from 28 to 38°C. Plants were grown under such conditions through all stages of their growth and development. Recordings were done for four years in June, July and August. Maize plants were brought from the glass-house into the laboratory during morning hours (between 7 and 8 a.m.). Plants sampled in the glass-house were transversally cut in the ground internode. In the laboratory, plants were internode lengthwise placed in water. Two hours prior to the bioluminescence experiment, the plants were kept under the black ball glass. A segment of ear intact leaves was taken from such plants and placed into a chamber of the modified Becquerel phosphoroscope. These studies were done with 40 plants each of maize hybrids and maize inbreds.

The non-invasive photosynthetic fluorescence method was used to measure the intensity of the chlorophyll DF induction process. These measures also included the resolution of the induction curve into the transients: A, B, C, D and E, as well as, recording of the generation of oscillations and rhythms.

This block scheme of the photosynthetic fluorescence method was developed at the Maize Research Institute, Zemun Polje. Measurements of changes in the intensity of induction processes of chlorophyll DF were performed after a method that had been both, in principle and details, described in previous papers [5, 7-10, 21].

The resolution of the induction processes of chlorophyll DF into transients: A, B, C, D and E and the appearance of oscillations occur when the intact leaf segment of maize inbreds and hybrids is kept in the

Fig. 2. Schematic illustration of a standard induction curve of chlorophyll DF typical for the intact leaf of maize in-breds and hybrids kept in the phosphoroscope darkroom for more than 15 min (t > 15 min). The arrow indicates the beginning of the measurement.

Fig. 3. Schematic illustration of possible sites of the oscillation generation and the formation of transients: A, B, C, D and E of the inductio