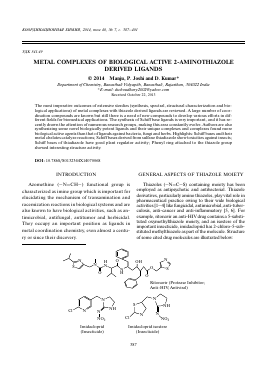 The most imperative outcomes of extensive sterdies (synthesis, spectral, structural characterization and biological applications) of metal complexes with thiazole derived ligands are reviewed. A large number of coordination compounds are known but still there is a need of new compounds to develop various efforts in different fields for biomedical applications. The synthesis of Schiff base ligands is very important, and it has recently drawn the attention of numerous research groups, making this area constantly evolve. Authors are also synthesizing some novel biologically potent ligands and their unique complexes and complexes found more biological active agents than that of ligands against bacteria, fungi and herbs. Highlights: Schiff bases and their metal chelates catalyze reactions; Schiff bases derived from sulfane thiadiazole show toxicities against insects; Schiff bases of thiadiazole have good plant regulator activity; Phenyl ring attached to the thiazole group showed interesting structure activity.

Azomethine (—N=CH—) functional group is characterized as imine group which is important for elucidating the mechanism of transamination and racemization reactions in biological systems and are also known to have biological activities, such as antimicrobial, antifungal, antitumor and herbicidal. They occupy an important position as ligands in metal coordination chemistry, even almost a century or since their discovery.

Thiazoles (—N=C—S) containing moiety has been employed as antipsychotic and antibacterial. Thiazole derivatives, particularly amino thiazoles, play vital role in pharmaceutical practice owing to their wide biological activities [1—4] like fungicidal, antimicrobial, antituberculosis, anti-cancer and anti-inflammatory [5, 6]. For example, ritonavir an anti-HIV drug contains a 5-substi-tuted oxymethylthiazole moiety, and an isostere of the important insecticide, imidacloprid has 2-chloro-5-sub-stituted methylthiazole as part of the molecule. Structure of some cited drug molecules are illustrated below:

The substituted thiazoles compounds have a number of characteristic pharmacological features, such as relative stability and ease of starting materials, built in biocidal unit, enhanced lipid solubility with hydrophi-licity, easy metabolism of compounds. The first syntheses of the thiazolic ring were made at the end of the nineteenth century when the initial research was carried out by scientists, such as Hantzsch, Hubacher, Traumann, Miolatti, Tcherniac, and Gabriel. The derivatives of pyridine and thiazoles soon constituted an important part of heterocyclic chemistry, as much from the point of view of the initial research as from the practical aspect. Their biological and pharmaceutical interest is in fact important as they appear in the composition of certain vitamins, such as vitamin B1 (thiamine) and in the penicillin's. Reduced thiazoles serve in the study of polypeptides and proteins and occur as structural units in compounds of biological significance, for example, firefly luciferins and in antibiotics bacitracin-A and thiostrepton. Equally, some derivatives of the 2-aminothiazoles are used as fungicides, pesticides, and bacteriocides, and others possess mi-todepressive and mitostatic properties, and a large range of 2-amino (and hydrazino)5-nitrothiazoles (nitridazole) are devoid of schistosomicidal activity. Certain Schiff bases derived from 2-amino-5-phe-nylthiazole and their reduction products show diuretic properties. Others such as rhodanines are used as intermediates in the synthesis of amino acids, peptides, and purines. In industry, several mercaptothiazole derivatives serve to accelerate the vulcanization of rubber, and alkyl- and acylthiazoles are known to be interesting flavoring agents. Finally, derivatives of thiazole are also to be found in certain natural products: a new amino acid incorporating the thiazole ring has been recently isolated from the fungus Xerocomus subto-mentosus. Syntheses of thiazoles have been carefully reviewed by Wiley et al., and in 1957 the subject was dealt with in an excellent survey by Sprague and Land. This list was usefully supplemented in 1970, 1973, and 1975 by the publications of Kurzer, and a number of books on penicillin contain much information on the reduced thiazole system. Asinger and Offermanns have reviewed the chemistry of d3-thiazolines, and Ohta and Kato's comprehensive survey on sydnones includes a section of mesoionic thiazoles.

It is well-known that the thiazolyl group is of great importance in biological systems [6]. Alkyl/arylami-noacetyl derivatives of 2-amino-4-phenylthiazolyl [7], 2-aminobenzothiazolyl [8], 2-amino(substitut-ed)-benzothiazolyl [9], 2-phenylamino-4-phenylthi-azolyl [10], 2-amino-4-methylthiazolyl [11] as well as 3-aminobenzo[d]isothiazole derivatives [12] were found to have a potent local anesthetic activity, anti-inflammatory, analgesic, and antipyretic activity [13, 14]. Thiazoles and Schiff bases are of great importance for the preparation of various pharmaceuticals and are used in many other areas of chemistry as starting materials [15, 16]. 2-Aminothiazoles are known mainly

as biologically active compounds with a broad range of activity and as intermediates in the synthesis of antibiotics and dyes [6]. Substituted a-halo ketones, like those used in the production of our ligand, are used for different purposes, especially in the synthesis of het-erocyclic substances [17—21]. Much research have been devoted [22—30] to study the metallo-organic and biological behavior of such derivatives containing the (CH=N) azomethine linkage. The biological activity of these compounds may be connected to their ability [31, 32] to form complexes with certain metal ions which may lead to a "locked geometry" via coordination mechanism so that only certain substances are able to become attached to the framework of this interaction [33, 34]. Multidentate ligands are extensively used in coordination chemistry, since they can be applied in the construction of new frameworks with interesting properties [35]. Among these ligands, the linear or cyclic Schiff bases have attracted much attention since most of their compounds prepared to date exhibit noteworthy bioactivity and desirable or predictable physicochemical, stereochemical, electrochemical, structural properties, etc. [36, 37]. These properties are due not only to the diverse condensation products of the amine-aldehyde reaction, but also to the participation of the specific metal atom and ligands. In some cases, the structural and biological properties of the corresponding coordination compounds are more noteworthy than those of the ligands alone. Their use as tools for the analysis of pharmacological [38, 39] substances and as analgesic, anti-inflammatory, antibiotic, antimicrobial [40] and especially as anticancer [41] agents are well known. Transition metal complexes of Schiff bases have received considerable attention, mainly due to their preparative accessibility, structural diversity, and wide range of applications in various fields [42—44]. Among these ligands, thiazole and its derivatives have been well studied owing to their significant activities [45—48]. Recognition of thiazole and its derivatives in vitamin B and coenzyme carboxylase have generated increasing interest in their structural and functional properties and have created an exciting topic for research [49, 50]. Schiff bases derived from substituted heterocyclic compounds containing nitrogen, sulphur and/or oxygen as ligand atoms are of interest as simple structural models of more complicated biological systems [51— 53]. Various heterocycles, especially thiazoles, occupy an important place owing to their versatile bioactivi-ties due to the presence of multifunctional groups [54—57]. Thiazole and its derivatives play significant part in the animal kingdom. Vitamin B1, penicillin and coenzyme cocarboxylase contain the thiazole ring. Polyfunctional ligands based on benzazoles are relevant due to their biological activities [58, 59]. Thiazole derivatives are widely used in the synthesis of the medicinal products, such as sulphathiazole (antibiotic) [60]. Benzothiazoles are used for production of dyes with photosensitizing properties [61]. Also, metal

Thiazole, C3H3NS, first described by Hantzsch and Weber in 1887 (Arthur Rudolf Hantzsch (1857— 1935) is among the lengthy list of important late 19th and early 20th century German chemists. Besides his synthesis of thiazole, his name has been attached to a pyridine synthesis, and to a pyrrole synthesis. The Hantzsch thiazole synthesis is still important, today is a five-membered aromatic heterocyclic (contains non-carbon atoms in the ring) organic compound that is useful in the manufacture of pesticides, drugs, dyes and other compounds. Some of them exhibit anti-tumor and anti-viral properties. Two modes of coordination must be considered for the system, bonding through nitrogen and sulphur donors. The majority of Schiff bases of 2-aminothiazole derivatives are obtained in good yield by condensation of aqueous and alcoholic solution. Since 2-aminothiazole has an additional potential coordination site in the amino nitrogen, it was considered worthwhile to study the complexes of this ligand.

Earlier, research work was focused on the synthesis, characterization and biological studies of coordination compound