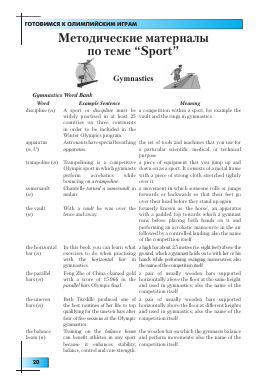 A sport or discipline must be widely practised in at least 25 countries on three continents in order to be included in the Winter Olympics program. Astronauts have special breathing apparatus.

trampoline (n) Trampolining is a competitive Olympic sport in which gymnasts perform acrobatics while bouncing on a trampoline. somersault Chantelle turned a somersault in ( n ) midair.

the vault With a vault he was over the

the horizontal In this book you can learn what

exercises to do when practising with the horizontal bar in gymnastics.

Feng Zhe of China claimed gold with a score of 15.966 in the parallel bars Olympic final.

Beth Tweddle produced one of the best routines of her life to top qualifying for the uneven bars after four of five sessions at the Olympic gymnastics.

Training on the balance beam can benefit athletes in any sport because it enhances stability balance, control and core strength.

a competition within a sport, for example the vault and the rings in gymnastics

the set of tools and machines that you use for a particular scientific, medical, or technical purpose

a piece of equipment that you jump up and down on as a sport. It consists of a metal frame with a piece of strong cloth stretched tightly over it

a pair of usually wooden bars supported horizontally above the floor at different heights and used in gymnastics; also the name of the competition itself

the wooden bar on which the gymnasts balance and perform movements; also the name of the competition itself

routine on the pommel horse, the event in which he won bronze at the 2008 Olympics. trophy (n) The players carried the trophy over their heads as they ran around the stadium.

- What do you think is the most popular sport in the world?

- What is the most popular sport in your country?

- What do you think the top five most watched sports in the world are?

- What is the most dangerous sport?

- Do you think it is good that professional sports are so commercial nowadays?

2. Test your knowledge of the Olympics. Answer the following questions:

- How many Olympic sports can you name?

- When and where did the first Olympic Games take place?

- How is a country chosen to hold the games?

- Is holding the games good for the country? What are the pros and cons?

- Which Olympic sport is your country good at?

- If you had a chance to change some Olympic sports, what sport would you add?

3. Read the text about one of the summer Olympic sports - gymnastics - and find out how many disciplines there are in modern women's and men's gymnastics.

Gymnastics is a sport which involves running, jumping, tumbling, somersaulting, and balancing. It is an Olympic sport and is split into three disciplines - artistic, rhythmic and trampoline.

There are three types of competitions for both men and women: team, all-round individual and separate events for each piece of apparatus. Two panels of judges rate all the performances. One panel assesses the difficulty of a routine and awards a rating out of 10 and the other panel marks each performance for its technical execution.

Each team has six gymnasts but only three can perform on each piece of apparatus. For the individual finals, the top eight from the qualification round on each piece of apparatus go through to contest the finals, while in the all-round individual events the top 24 men and 24 women in the qualification round advance to the finals.

a padded rectangular or cylindrical form normally on wooden legs with two u-shaped handles (i.e. pommels) on the top, which a gymnast holds on to with her or his hands while performing movements; also the name of the competition itself a decorative object awarded as a prize in a contest or a tournament

Shun Fujimoto broke his knee cap at the 1976 Olympics but told nobody, hid his pain and continued to help Japan win team gold.

Rhythmic gymnastics is performed exclusively by women, with the gymnasts performing choreographed movements to music using apparatus such as rope, hoop, ball, clubs and a ribbon. In 1984 rhythmic gymnastics became an Olympic event. Individuals will compete in the hoop, ball, clubs and ribbon disciplines, while groups, each consisting of six gymnasts, will complete one routine with five ribbons and a routine with three hoops and two balls. In rhythmic gymnastics you can not use any tumbling moves. Scoring is carried out by two panels of judges, as in artistic gymnastics. Routines last 1.25 min to 1.5 min for individual exercises, and 2.25mins to 2.5 mins for group exercises.

The leotard is the gymnastics uniform. It gives gymnasts and dancers freedom of movement. The leotard is named after the French acrobat Jules Leotard (1842-1870). He performed the first flying trapeze act on November 12, 1859 while wearing a body-hugging costume. Olympic trampoline is a relative newcomer on the Olympic program, making its debut at the 2000 Olympic Games in Sydney. The word "trampoline" is derived from the words "trampling" and "board." Over time, it became "trampolining", and finally "trampoline". Both men and women participate in the trampoline. A total of 16 men and 16 women will compete and all athletes are obliged to submit a competition card, 48 hours prior to the event, detailing their routines. They will perform two routines: a voluntary routine with 10 elements and a second with no limits that demonstrates 10 different skills. Eleven judges watch the routines and award scores for height, technique, execution, continuous rhythm, body control, and everything from the angle of the limbs to the position of the feet must be as close to perfect as possible.

While the first trampoline is rumored to have originated from the Eskimos, the apparatus we know today is credited to inventor George Nissen, who was inspired by the way trapeze artists performed tricks after bouncing onto their safety nets. Since then, the trampoline has been used as a training tool for astronauts (it leads to a better understanding of the body in space), tumblers, and other athletes.

You Know You Are a Gymnast When...

- You spend as much time on your hands as much as on your feet.

- You find leotards more comfortable than your other clothes.

- Your gym becomes your home.

- When someone says "bars" you don't think of chocolate, jail or drinking.

- At your math class you start counting, 'And one and two and three and four".

- Your room is tidy because you are never in it.

- Changing into a leotard in less than one minute becomes easy.

- When waiting in a queue you stand in the fifth position.

1. Which of the following disciplines is not a gymnastic sport?

a) The horizontal bar

2. What are the events in gymnastics that both men and women do?

a) The floor and vault

b) The balance beam and uneven bars

c) The hoop and ribbon

d) The hoop and clubs

4. How old does a gymnast have to be to compete in the Olympics?

5. In which discipline does the gymnast hold on to two round handles?

b) The parallel bars

6. Which of the following does a good floor routine need most?

7. What do we call different competitions within a sport?

In this web-quest, students are to find out some interesting facts about the Olympics gymnastics.

1. When was the first women's Olympic competition in gymnastics held?

3. Which apparatus is the Yurchenko loop performed on?

4. When was the trampoline gymnastics included in the Olympics?

5. Name the first American gymnast who won the Olympic all around championship at the 2004 Seoul Olympic Games.

6. Which country did Mary Lou Retton, the first gymnast from outside Eastern Europe to win a gold medal in the 1984 Los Angeles Olympics, represent?

7. Name the gymnast who won two gold medals for the balance beam and the floor exercise events at the 1972 Munich Olympics.

8. Which country won the men's and women's gold medals in the trampoline gymnastics events at the 2000 Sydney Olympic Games?

9. Name the first gymnast in history to score a perfect 10 in the 1976 Canada Olympics.