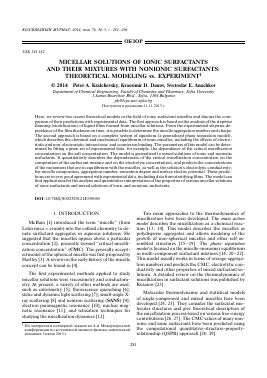 Here, we review two recent theoretical models in the field of ionic surfactant micelles and discuss the comparison of their predictions with experimental data. The first approach is based on the analysis of the stepwise thinning (stratification) of liquid films formed from micellar solutions. From the experimental stepwise dependence of the film thickness on time, it is possible to determine the micelle aggregation number and charge. The second approach is based on a complete system of equations (a generalized phase separation model), which describes the chemical and mechanical equilibrium of ionic micelles, including the effects of electrostatic and non-electrostatic interactions, and counterion binding. The parameters of this model can be determined by fitting a given set of experimental data, for example, the dependence of the critical micellization concentration on the salt concentration. The model is generalized to mixed solutions of ionic and nonionic surfactants. It quantitatively describes the dependencies of the critical micellization concentration on the composition of the surfactant mixture and on the electrolyte concentration, and predicts the concentrations of the monomers that are in equilibrium with the micelles, as well as the solution's electrolytic conductivity; the micelle composition, aggregation number, ionization degree and surface electric potential. These predictions are in very good agreement with experimental data, including data from stratifying films. The model can find applications for the analysis and quantitative interpretation of the properties of various micellar solutions of ionic surfactants and mixed solutions of ionic and nonionic surfactants.

McBain [1] introduced the term "micelle" (from Latin mica = crumb) into the colloid chemistry to denote surfactant aggregates in aqueous solutions. He suggested that the micelles appear above a particular concentration [2], presently termed "critical micelli-zation concentration" (CMC). The generally accepted model of the spherical micelle was first proposed by Hartley [3]. A review on the early history of the micelle concept can be found in [4].

The first experimental methods applied to study micellar solutions were viscosimetry and conductom-etry. At present, a variety of other methods are used, such as calorimetry [5]; fluorescence quenching [6]; static and dynamic light scattering [7]; small-angle X-ray scattering [8] and neutron scattering (SANS) [9]; electron paramagnetic resonance [10]; nuclear magnetic resonance [11], and relaxation techniques for studying the micellization dynamics [12].

Two main approaches to the thermodynamics of micellization have been developed. The mass action model describes the micellization as a chemical reaction [13, 14]. This model describes the micelles as polydisperse aggregates and allows modeling of the growth of non-spherical micelles and other self-assembled structures [15—19]. The phase separation model is focused on the micelle-monomer equilibrium in multi-component surfactant mixtures [14, 20—22]. This model usually works in terms of average aggregation numbers and predicts the CMC, electrolytic conductivity and other properties of mixed surfactant solutions. A detailed review on the thermodynamics of micellization in surfactant solutions was published by Rusanov [23].

Molecular thermodynamic and statistical models of single-component and mixed micelles have been developed [24, 25]. They consider the surfactant molecular structures and give theoretical description of the micellization process based on various free-energy contributions [26, 27]. The CMC values of many non-ionic and ionic surfactants have been predicted using the computational quantitative-structure-property-relationship (QSPR) approach [28, 29].

The first models of micellization kinetics were developed by Kresheck et al. [30], and Aniansson and Wall [31]. These models have been extended to simultaneously account for the relaxations in the micelle concentration, aggregation number and polydispersity [32]; to predict the dynamic surface tension of micel-lar solutions [33—35], and to quantify the micellar relaxation in the case of coexisting spherical and cylindrical micelles [36].

In the present article, we review two recent theoretical models in the field of ionic surfactant micelles and discuss the comparison of their predictions with experimental data. As sketched in Fig. 1, an ionic micelle consists of surfactant ions, bound counterions and of the electric double layer around the micelle. The number of surfactant molecules incorporated in the micelle determines its aggregation number, Nagg. The degrees of micelle ionization and counterion binding will be denoted, respectively, by a and 9; at that, a + 9 = 1. For simplicity, we will consider monovalent surfactant ions and counterions. The micelle charge (in elementary-electric-charge units) is

The stepwise thinning (stratification) of foam films formed from solutions of ionic surfactants depends on the micelle aggregation number and charge, Nagg and Z. Conversely, from the experimental stratification curves it is possible to determine both Nagg and Z with the help of an appropriate theoretical analysis [37, 38]. In addition, information for Nagg and Z is "coded" in the experimentally measured dependences (i) of the CMC of ionic surfactant solutions on the concentration of added salt, and (ii) of the solution's electric conductivity on the surfactant concentration. Information for the micellar properties can be extracted by fitting of the experimental curves with a quantitative thermodynamic model that correctly describes the micelle—monomer equilibrium [39].

Section 2 describes the experiments with stratifying films, and the methods for determining Nagg and Z from the experimental time-dependencies of the film thickness. Section 3 presents the thermodynamic model of micelle—monomer equilibrium and its application for the analysis of experimental data. Finally, Section 4 is dedicated to the generalization of the thermodynamic model to mixed micellar solutions of ionic and nonionic surfactants. The present review article could be useful for all readers who are interested in the analysis and quantitative interpretation of the properties of micellar solutions containing ionic surfactants.

The experiments with thin liquid films containing molecules [40] or colloidal spheres [41] indicate the existence of an oscillatory surface force, which is manifested by the stepwise thinning of the films. These effects are due to the ordering of Brownian particles (molecules or colloidal spheres) near the interface. The ordering decays with the distance from the surface. If two interfaces approach each other, the ordered zones near each of them overlap, thus, enhancing the particle ordering within the liquid film [42]. Upon decreasing the film thickness, layers of particles are expelled, one-by-one, which leads to a stepwise thinning (stratification) of the film. This phenomenon was observed long ago by Johonnott [43] and Perrin [44] with films from surfactant solutions and was interpreted by Nikolov et al. [41, 45, 46] as a layer-by-layer thinning of the structure of spherical micelles formed inside the film.

In the case of nonionic surfactant micelles, the behavior of the stratifying films can be described in terms of the statistical theory of hard spheres confined between two hard walls [47—51]. In this case, the period of the oscillatory force [50—52] and the height of the stratification step [53—55] is close to the diameter of the nonionic micelle (or another colloidal particle). However, in the case of ionic surfactant micelles, the height of the step is considerably greater than the micelle hydrodynamic diameter [37, 38, 41]. Hence, in this case the electrostatic repulsion between the charged micelles determines the distance between them. Following [37, 38], here we will demonstrate that the micelle aggregation number, Nagg, and charge, Z can be determined from the stepwise thinning of foam films formed from ionic surfactant solutions.

The most convenient and relatively simple instrument for investigation of stratifying liquid films is the Scheludko—Exerowa (SE) cell [56, 57], which is presented schematically in Fig. 2. The investigated solution is loaded in a cylindrical capillary (of inner diameter ~1 mm) through an orifice in its wall. A biconcave

drop is formed inside the capillary. Next, liquid is sucked through the orifice and the two menisci approach each other until a liquid film is formed in the central part of the cell. By injecting or sucking liquid through the orifice, one can vary the radius of the formed film. Its thickness can be measured by means of an interferometric method [57] of accuracy ±0.5 nm. For this purpose, the light reflected from the film is supplied to a photomultiplier and computer, and the intensity of the reflected light, J, is recorded in the course of the experim