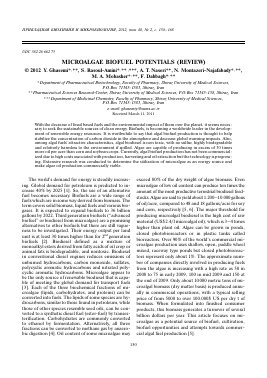 With the decrease of fossil based fuels and the environmental impact of them over the planet, it seems necessary to seek the sustainable sources of clean energy. Biofuels, is becoming a worldwide leader in the development of renewable energy resources. It is worthwhile to say that algal biofuel production is thought to help stabilize the concentration of carbon dioxide in the atmosphere and decrease global warming impacts. Also, among algal fuels' attractive characteristics, algal biodiesel is non toxic, with no sulfur, highly biodegradable and relatively harmless to the environment if spilled. Algae are capable of producing in excess of 30 times more oil per acre than corn and soybean crops. Currently, algal biofuel production has not been commercialized due to high costs associated with production, harvesting and oil extraction but the technology is progressing. Extensive research was conducted to determine the utilization of microalgae as an energy source and make algae oil production commercially viable.

The world's demand for energy is steadily increasing. Global demand for petroleum is predicted to increase 40% by 2025 [1]. So, the use of an alternative fuel becomes necessary. Biofuels are a wide range of fuels which are in some way derived from biomass. The term covers solid biomass, liquid fuels and various biogases. It is expected to expand biofuels to 36 billion gallons by 2022. Third generation biofuels ("advanced biofuel" or biodiesel from microalgae) are a promising alternatives to other biofuels but there are still vagueness to be investigated. Their energy output per land unit is at least 30 times higher than for 2nd generation biofuels [2]. Biodiesel defined as a mixture of monoalkyl esters derived from fatty acids of oil crop or animal fats is biodegradable, and nontoxic. Biodiesel in conventional diesel engines reduces emissions of unburned hydrocarbons, carbon monoxide, sulfates, polycyclic aromatic hydrocarbons and nitrated poly-cyclic aromatic hydrocarbons. Microalgae appear to be the only source of renewable biodiesel that is capable of meeting the global demand for transport fuels [3]. Each of the three biochemical fractions of microalgae (lipids, carbohydrates, and proteins) can be converted into fuels. The lipids of some species are hydrocarbons, similar to those found in petroleum, while those of other species resemble seed oils, can be converted to a synthetic diesel fuel (ester-fuel) by transes-terification. Carbohydrates are commonly converted to ethanol by fermentation. Alternatively, all three fractions can be converted to methane gas by anaerobic digestion [4]. Oil content of some microalgae may

exceed 80% of the dry weight of algae biomass. Even microalgae of low oil content can produce ten times the amount of the most productive terrestrial biodiesel feedstocks. Algae are said to yield about 1.200—10.000 gallons of oil/acre, compared to 48 and 18 gallons/acre for soy and corn, respectively [5, 6]. The major threshold for producing microalgal biodiesel is the high cost of raw material (US$2.4/l microalgal oil), which is 3—4 times higher than plant oil. Algae can be grown in ponds, closed photobioreactors or in plastic tanks called bioreactors. Over 90% of the world's commercial mi-croalgae production uses shallow, open, paddle wheel mixed, raceway type ponds but closed photobioreac-tors represent only about 1%. The approximate number of companies directly involved in producing fuels from the algae is increasing with a high rate as 50 in 2008 to 75 in early 2009, 100 in mid 2009 and 150 at the end of 2009. Only about 10000 metric tons of microalgal biomass (dry matter basis) is produced annually in commercial operations, with a typical selling price of from 5000 to over 100.000$ US per dry t of biomass. When formulated into finished consumer products, this biomass generates a turnover of several billion dollars per year. This article focuses on mi-croalgae as a potential source of biofuel, cultivation, biofuel opportunities and attempts towards commercial algal fuel production [5].

WHY BIOFUEL? WHY ALGAL BIOFUEL?

The remaining global reserves of crude oil are continuously declining. Based on the available data, the world will run out of crude oil in 24 to 57 years from today [7]. It was estimated that by 2050 biomass could provide nearly 38% of the world's direct fuel use and 17% of the world's electricity [8]. A major criticism against large-scale biofuel production is that it will occupy vast farm land and native habitats, drive up food prices, and result in little reduction in CO2 emissions. At the moment, only biodiesel and bioethanol are produced on an industrial scale which are derived from food crops such as sugarcane, sugar beet, maize (corn), sorghum and wheat which is known as first generation biofuel. The basic feedstocks for the production of first-generation biofuels are often grains, which yield starch that is fermented into bioethanol, or seeds, which are pressed to yield vegetable oil that can be used in biodiesel. Second generation biofuels use biomass to liquid technology, including cellulosic biofuels (grassoline) from nonfood crops, including waste biomass, the stalks of wheat, corn, or wood. These biofuels are inherently more efficient than first generation technologies because they use more of the plant to produce fuel [3]. Third-generation biofuels "advanced biofuels" are derived from algae [3]. For 2010 it is expected to have 100000 gallons of algal biofuel production which will increase to 6 billion gallons in 2025 [9]. It is said that in 2020, 30% of algae production goes to oil fraction [10]. Algal biofuels have a tremendous variety. Algal biomass may be used directly as a solid biofuel to generate heat, steam and electricity or converted to gaseous biofuels, such as biogas and biohydrogen. Algal biomass rich in starch can be easily fermented to liquid biofuels such as bioethanol and biobutanol. Algal oils can be converted to diesel, gasoline and jet fuel using existing technology [5]. Currently biodiesel is used for blending (2—10%) with crude oil without the need for any modifications in existing engines since that makes no difference in vapour pressure, viscosity, density, and octane/cetane number. Algae can produce 267 l of ethanol (assuming a 40% starch content) and 190 l of biodiesel/ dry t [11]. Microalgae containing 30% oil by weight of dry biomass could yield almost 587000 l/ha or 5.00015000 gallons/year [10]. However, up to now, the commercial production of biofuels from microalgae has not been realised on an industrial scale in a cost-efficient manner. Several problems have arisen during the large scale production, including high investment costs for production facilities and energy demand for harvesting biomass of low concentration [12]. Microalgal biofuels are 4-10 times as expensive to produce as petroleum-derived fuels or other biodiesels [5].

start of biodiesel production. A limited number, about 4000 species have been identified, which can be divided into several groups including cyanobacteria (Cy-anophyceae), green algae (Chlorophyceae), diatoms (Bacillariophyceae), yellow-green algae (Xantho-phyceae), golden algae (Chrysophyceae), red algae (Rhodophyceae), brown algae (Phaeophyceae), di-noflagellates (Dinophyceae) and 'pico-plank-ton'(Prasinophyceae and Eustigmatophyceae) [13]. The three most prevalent groups of algae targeted for biodiesel production include the diatoms that make up a majority of phytoplankton in salt and brackish waters, green algae common in many freshwater systems, blue-green algae (Cyanophyceae), which are actually bacteria that contain chloroplasts and are important to nitrogen fixation in aquatic systems, and finally the golden algae species able to store carbon as oil and complex carbohydrates [14-16]. They have oil levels between 20 and 75% by weight of dry biomass (Table 1). In general, lower oil strains grow faster than high oil strains [17]. Microalgae containing 30% oil grow 30 times faster than those containing 80% oil [18]. Another challenge is that microalgae usually accumulate oil under stress conditions with slow growth rate. The composition of microalgal fatty acids has a significant effect on the fuel properties of biodiesel produced. The proper percentage of saturated and unsaturated fatty acid is very important to microalgae as a biodiesel feedstock [10].

For strain selection, some factors are: lipid content, more the distribution of free fatty acids and triglycerides not only the total lipids; resistance to environmental conditions changes, competition from other microalgae species and/or bacterial; nutrients availability; ease of biomass separation and processing; possibility of obtaining other valuable chemicals. Even when the species are not quite deasirable for the purpose in commercial use, the utilization of genetic engineering may be a solution [21]. Type of metabolism is also important for strain selection. Microalgae may assume many types of metabolisms (autotrophic, het-erotrophic, mixotrophic, photoheterotrophic) and are capable of a metabolic shift as a response to