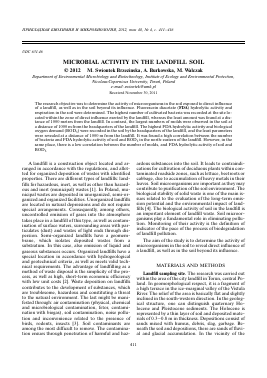 A landfill is a construction object located and arranged in accordance with the regulations, and allotted for organized deposition of wastes with identified properties. There are different types of landfills: landfills for hazardous, inert, as well as other than hazardous and inert (municipal) wastes [1]. In Poland, municipal wastes are deposited in unorganized, semi-organized and organized facilities. Unorganized landfills are located in natural depressions and do not require special arrangements. Consequently, among others, uncontrolled emission of gases into the atmosphere takes place in a landfill of this type, as well as contamination of surface waters, surrounding areas with particulates (dust) and wastes of light ends through dispersion. Semi-organized landfills have a geomem-brane, which isolates deposited wastes from a substratum. In this case, also emission of liquid and gaseous substances occurs. Organized landfills have a special location in accordance with hydrogeological and geotechnical criteria, as well as meets valid technical requirements. The advantage of landfilling as a method of waste disposal is the simplicity of the process, as well as high, short-term economic efficiency with low unit costs [2]. Waste deposition on landfills contributes to the development of substances, which are troublesome, hazardous and constituting a threat to the natural environment. The last might be manifested through: air contamination (physical, chemical and microbiological contamination, fetor, contamination with biogas), soil contamination, noise pollution and inconvenience related to the presence of birds, rodents, insects [3]. Soil contaminants are among the most difficult to remove. The contamination ensues through penetration of harmful and haz-

ardous substances into the soil. It leads to contraindications for cultivation of deciduous plants within contaminated roadside zones, such as lettuce, beetroots or cabbage, due to accumulation of heavy metals in their leaves. Soil microorganisms are important as they may contribute to purification of the soil environment. The biological stability of solid waste is one of the main issues related to the evaluation of the long-term emission potential and the environmental impact of landfills [4]. The biological activity of soil in the landfill is an important element of landfill waste. Soil microorganisms play a fundamental role in eliminating pollution. Monitoring of their activity is the definition of indicator of the pace of the process of biodegradation of landfill pollution.

The aim of the study is to determine the activity of microorganisms in the soil to reveal direct influence of a landfill, as well as in the soil beyond its influence.

Landfill sampling site. The research was carried out within the area of the city landfill in Torun, central Poland. In geomorphological respect, it is a fragment of a high terrace in the ice-marginal valley of the Vistula River. The relief of the area is basically flat and slightly inclined in the south-western direction. In the geological structure, one can distinguish quaternary Ho-locene and Pleistocene sediments. The Holocene is represented by a thin layer of soil and deposited materials of 0.3—0.8 m in thickness. Depositions consist of sands mixed with humus, debris, slag, garbage. Beneath the soil and depositions, there are sands of fluvial and glacial accumulation. In the vicinity of the

composting plant, they reach down to the depth of 9— 10 m. Below that, down to the depth of 13 m, fluvial-glacial gravel is deposited, and beneath them — lacustrine and glacial clay. The landfill is classified as a disposal ground for wastes other than hazardous and inert, with a cell sectioned off for landfilling of hazardous wastes.

Soil hydrolytic activity. Soil hydrolytic activity expressed as fluorescien diacetate (FDA) hydrolysis was determined following the method of Adam and Duncan [6]. It is known that FDA is a general substrate for several hydrolytic enzymes including esterases, lipases and certain proteases [7]. FDA hydrolytic activity was detected with spectrofluorimeter HITACHI F-2500 (Japan) measuring the product of hydrolysis (fluorescein). 100 ^l of FDA (1 mg/ml) was added to the assay suspension of 1.0 g soil in 20 ml of phosphate buffer (pH 6.0). The assay mixture was placed on a rotary shaker at 100 rpm and incubated at temperature in situ for 60 min. The assay was terminated by with adding chloroform/methanol (2 : 1 v/v), followed by centrif-ugation at 10000 x g for 10 min at 4°C. In supernatant the released fluorescein was measured (excitation and emission wavelength 480 nm and 505 nm, respectively). All samples were analyzed in three replicates.

Soil respiration measurement. Biological oxygen demand (BOD) is a measure of the amount of oxygen used by microorganisms as they feed upon organic matter. BOD of soil was measured using the OxiTop® Control system [8]. It acts as a system of bottles hermetically closed by a manometric head which allows you to monitor the pressure inside the bottle. If microorganisms consume polymer, they use oxygen available in test bottles and release carbon dioxide, which is immediately trapped by the sodium hydroxide solution. Consequently, we record a pressure decrease in a test bottle. The BOD value was calculated automatically by the OxiTop® instrument. BOD measurements in the soil were carried out as described in the WTW instructions [9] with modifications. A 100 g of

the soil were weighed out and placed in a BOD OxiTop® MG 1.0 bottle. The carriers with absorber CO2 (0.4 g NaOH) were placed in a bottle. The measured values were recorded in the OC 110 control system, in "Pressure p" mode. Samples were incubated for 5 days at temperature in situ to get BOD5 — the amount of dissolved oxygen consumed in 5 days by microorganisms. All samples were analyzed in three replicates.

Statistical analysis. Results were analyzed in STA-TISTICA 6.0, StatSoft, USA. Analysis of variance (ANOVA) facilitated comparison of site and part of landfill on abundances microorganisms, FAD hydrolysis and BOD5. In addition, we determined correlation between abundance of microorganisms and hy-drolytic activity and BOD5.

In the study of the influence of a municipal landfill on the soil microflora Nowak et al. [10] found that heterotrophic bacteria occurred in the largest numbers, actinomycetes were slightly less, and molds were the least numerous. The analysis of variance performed by the authors revealed that the number of bacteria and actinomycetes significantly depended on the sample collection site. The largest numbers of these microorganisms were recorded by the authors in the vicinity of the waste disposal ground. Their number decreased as the distance from the landfill increased. In contrast, the number of molds was not influenced by the soil sample collection site. The number and the acti