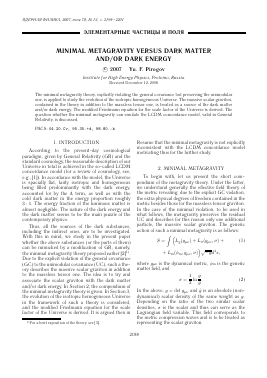 The minimal metagravity theory, explicitly violating the general covariance but preserving the unimodular one, is applied to study the evolution of the isotropic homogeneous Universe. The massive scalar graviton, contained in the theory in addition to the massless tensor one, is treated as a source of the dark matter and/or dark energy. The modified Friedmann equation for the scale factor of the Universe is derived. The question whether the minimal metagravity can emulate the LCDM concordance model, valid in General Relativity, is discussed.

According to the present-day cosmological paradigm, given by General Relativity (GR) and the standard cosmology, the reasonable description of our Universe in total is achieved in the so-called LCDM concordance model (for a review of cosmology, see, e.g., [ 1]). In accordance with the model, the Universe is spacially flat, fairly isotropic and homogeneous being filled predominantly with the dark energy, accounted for by the A term, as well as with the cold dark matter in the energy proportion roughly 3 : 1. The energy fraction of the luminous matter is almost negligible. The nature of the dark energy and the dark matter seems to be the main puzzle of the contemporary physics.

Thus, all the sources of the dark substances, including the indirect ones, are to be investigated. With this in mind, we study in the present paper whether the above substances (or the parts of them) can be mimicked by a modification of GR, namely, the minimal metagravity theory proposed earlier [2]!). Due to the explicit violation of the general covariance (GC) to the unimodular covariance (UC), such a theory describes the massive scalar graviton in addition to the massless tensor one. The idea is to try and associate the scalar graviton with the dark matter and/or dark energy. In Section 2, the compendium of the minimal metagravity theory is given. In Section 3, the evolution of the isotropic homogeneous Universe in the framework of such a theory is considered, and the modified Friedmann equation for the scale factor of the Universe is derived. It is argued then in

Resume that the minimal metagravity is not explicitly inconsistent with the LCDM concordance model motivating thus for the further study.

To begin with, let us present the short compendium of the metagravity theory. Under the latter, we understand generally the effective field theory of the metric revealing, due to the explicit GC violation, the extra physical degrees of freedom contained in the metric besides those for the massless tensor graviton. In the case of the minimal violation, to be used in what follows, the metagravity preserves the residual UC and describes for this reason only one additional particle, the massive scalar graviton. The generic action of such a minimal metagravity is as follows:

where g^v is the dynamical metric, is the generic matter field, and

In the above, g = det g^v and g is an absolute (non-dynamical) scalar density of the same weight as g. Depending on the ratio of the two similar scalar densities, a is the scalar and thus can serve as the Lagrangian field variable. This field corresponds to the metric compression waves and is to be treated as representing the scalar graviton.

In Eq. (1), Lg is the generally covariant La-grangian for the tensor graviton being chosen conventionally in the extended Einstein—Hilbert form:

Here, f a is a constant with the dimension of mass and Va is the potential producing the mass for the scalar graviton. The dependence of a on g explicitly violates the part of GC, namely the local scale covariance, still preserving the residual UC. A priori, one expects f a = O(mP). Also, one expects that Va, though being nonzero, is suppressed. Finally, Lm is the matter Lagrangian possessing, generally, only the residual UC, too.

Varying the action (1), with respect to g^v, g being fixed, one arrives at the minimal metagravity equation:

The term T^V^ can be treated as the scalar-graviton contribution to the dark matter and/or dark energy. Finally,

where R = R^v is the Ricci scalar, with R^v being the Ricci curvature, and A is the cosmologi-cal constant. Also, mP = (8nGN)-l/2 is the Planck mass, with GN being the Newton's constant. La is the scalar-graviton Lagrangian looking in the lowest order on the derivatives as follows:

the energy—momentum of the matter and the scalar gravitons is conserved covariantly:

whereas the energy—momentum of the matter alone,

In the properly chosen observer's coordinates xß = (t, p, d, p) the Friedmann—Robertson—Walker solution for the interval in the isotropic homogeneous Universe is

being the gravity tensor. The r.h.s. of Eq. (5) is the total energy—momentum of the nontensor-graviton origin, produced by the matter and the scalar gravitons, plus the vacuum energy. TjV ^ is the matter energy—momentum tensor including, if required, the real dark-matter contribution, too. For the matter as the continuous medium, of interest in cosmology, one has

pressure, and u^ being the medium 4-velocity. T^^ is the scalar-graviton contribution:

with k being a constant with the dimension of mass. This interval is form-invariant relative to the shift of the origin of the spacial coordinates, reflecting the isotropy and homogeneity of the Universe. Conventionally, one can rescale the unit of mass so that k2 = = k, with k = ±1, 0. The last three cases correspond, respectively, to the spacially closed, open, and flat Universe. In Eq. (12), the spacial factor 1/(1 — K2p2) is the geometrical one, given a priori, while the temporal scale factor a(t) is the dynamical one to be determined by the gravity equations.

with a(t) being a free temporal factor. Altogether one has

with à = d?a/dt2, and p and p being the total energy density and pressure, respectively:

with the effective "equation of state"

Note that pa and Pa are coordinate dependent, in distinction to the scalars pm and Pm. In the above, one has

with H = a/a, and use is made of the relation

With account for Eqs. (22) and (24), the two equations (20) substitute the similar equations valid in GR. The first of equations (20), the modified Friedmann equation, determines the scale factor a(t), with the second equation giving the consistency condition. Introducing the "critical" energy density

one can bring the modified Friedmann equation to the form

Further, differentiating the first of equations (20) and combining the result with the second equation, one can substitute the latter by the continuity condition:

To really solve these equations one should specify the free functions entering the theory. For the continuous medium, there are conventionally two extreme cases: the dust

For the scalar graviton, the good starting point would conceivably be the assumption aa = const and thus H = 0.As for the potential Va, little can be said about it a priori, and probably it should be looked for by the trial-and-error method. With these caveats, the equations above are ready for use in working out the cosmological scenarios in the framework of the minimal metagravity.