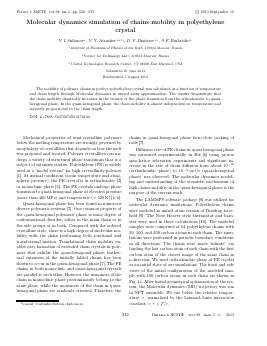 + Institute of Biochemical Physics of the RAS, 119334 Moscow, Russia

The mobility of polymer chains in perfect polyethylene crystal was calculated as a function of temperature and chain length through Molecular dynamics in united atom approximation. The results demonstrate that the chain mobility drastically increases in the vicinity of the phase transition from the orthorhombic to quasi-hexagonal phase. In the quasi-hexagonal phase, the chain mobility is almost independent on temperature and inversely proportional to the chain length.

Mechanical properties of semi-crystalline polymers below the melting temperature are strongly governed by morphology of crystallites that depends on how the melt was prepared and treated. Polymer crystallites can undergo a variety of structural phase transitions that is a subject of extensive studies. Polyethylene (PE) is widely used as a "model system" for high-crystallinity polymer [1]. At normal conditions (room temperature and atmospheric pressure), the PE crystal is in orthorhombic [2] or monoclinic phase [3]. The PE crystals undergo phase transition to quasi-hexagonal phase at elevated pressure (more than 400 MPa) and temperature (> 520 K) [4-6].

Diffusion rate of PE chains in quasi-hexagonal phase was measured experimentally in Ref. [6] using proton spin-lattice relaxation experiments and significant increase in the rate of chain diffusion from about 10"12 (orthorhombic phase) to 10"9 cm2/s (quasi-hexagonal phase) was observed. The molecular dynamics modeling and understanding of the atomistic mechanisms of high chains mobility in the quasi-hexagonal phase is the purpose of the current work.

The LAMMPS software package [8] was utilized for molecular dynamics simulations. Polyethylene chains were modeled in united atom version of Dreiding force-field [9]. The Nose-Hoover style thermostat and baro-stat were used in these calculations [10]. The modeled samples were comprised of 64 polyethylene chains with 36, 100, and 200 carbon atoms in each chain. The simulations were performed in periodic boundary conditions in all directions. The chains were made "infinite" via binding the last carbon atom of each chain with the first carbon atom of the closest image of the same chain in c-direction. We used orthorhombic phase of PE crystal as an initial state of our simulations. The front and side views of the initial configuration of the modeled sample with 100 carbon atoms in each chain are shown in Fig. 1a. After initial geometrical optimization of the system, the Molecular dynamics (MD) trajectory was run in NPT ensemble. We use below the relative temperature, t, normalized by the Lennard-Jones interaction constant, e; t = T/e.

The ratio of the elementary crystal cell dimensions transversal to the chain direction, b/a, is equal to %/3 « « 1.732 in the quasi-hexagonal phase. Calculated b/a averaged through MD trajectory in NPT ensemble as a function of temperature is presented in Fig. 2. The transition from monoclinic to quasi-hexagonal phase occurs in the temperature range from t = 4 to 4.5 Lennard-Jones units as seen in Fig. 2. The transition manifests itself in the abrupt change of the system sizes in transversal directions, which indicates the change of the chain packing in the crystal. The ratio b/a = 1.732 stated above the transition temperature implies the quasi-hexagonal packing of the chains. Qualitatively similar dependence of b/a on temperature for PE crystal was obtained in united atom molecular dynamic simulation in [11] (see Fig. 1 therein). Minor quantitative differ-

To study the orientation order in the phases the distribution of the setting angle was calculated following [11]. The distribution of the setting angle is a sum of ¿-functions in totally orientation ordered phase and is a constant in disordered phase. The local setting angle a is defined for each atom as follows. For each bond angle formed by three neighboring atoms in one chain, a bisector vector is constructed, which is multiplied by ( — 1)" (n is the number of an atom in the chain). The angle a is the angle between the x-axis and the projection of this vector onto xy-plane. The distributions of setting angle for three temperatures are shown in Fig. 3. Qualitatively, Fig. 3 looks similar to Fig. 2 in [11]. The

quantitative differences should be attributed to the difference of the employed force fields.

In monoclinic phase (t = 3 and 4), the setting angle is distributed near a = 0° and 180° and the width of distribution decreases with decrease of temperature.

Fig. 4. Calculated from MD trajectories mean square displacements of the chains, (Az2(t)}, as functions of time for several temperatures. The number of carbon atoms in the chain is 36

where Nc is the number of chains in the system.

The dependencies (Az2(t)) for three temperatures are presented in Fig. 4 for the crystal with 100 carbon atoms in each chain.

The mean square displacements in Fig. 4 were approximated by linear dependencies on time, (Az2(t)) = = 2Dt. Diffusion coefficient of the chains, D, is calculated from the slope of the linear trend