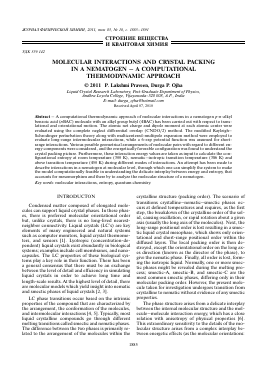 Abstract — A computational thermodynamic approach of molecular interactions in a nematogen p-n-alkyl benzoic acid (nBAC) molecule with an alkyl group butyl (4BAC) has been carried out with respect to trans-lational and orientational motion. The atomic net charge and dipole moment at each atomic center were evaluated using the complete neglect differential overlap (CNDO/2) method. The modified Rayleigh— Schrodinger perturbation theory along with multicentered-multipole expansion method were employed to evaluate long-range intermolecular interactions, while a 6-exp potential function was assumed for short-range interactions. Various possible geometrical arrangements of molecular pairs with regard to different energy components were considered, and the energetically favorable configuration was found to understand the crystal packing picture. Furthermore, these interaction energy values are taken as input to calculate the con-figurational entropy at room temperature (300 K), nematic—isotropic transition temperature (386 K) and above transition temperature (450 K) during different modes of interactions. An attempt has been made to describe interactions in a nematogen at molecular level, through which one can simplify the system to make the model computationally feasible in understanding the delicate interplay between energy and entropy, that accounts for mesomorphism and there by to analyze the molecular structure of a nematogen.

Condensed matter composed of elongated molecules can support liquid crystal phases. In these phases, there is preferred molecular orientational order but, unlike crystals, there is no long-lived nearest-neighbor connectivity. Liquid crystals (LC's) are key elements of many engineered and natural systems such as computer monitors, liquid crystal thermometers, and sensors [1]. Lyotropic (concentration-dependent) liquid crystals exist abundantly in biological systems; examples include cell membranes, and nano-capsules. The LC properties of these biological systems play a key role in their function. There has been a general consensus that there must be an exchange between the level of detail and efficiency in simulating liquid crystals in order to achieve long time and length-scale results. At the highest level of detail, there are molecular models which yield insight into nematic and smectic phases of liquid crystals [2, 3].

LC phase transitions occur based on the intrinsic properties of the compound that are characterized by the arrangement, the conformation of the molecules, and intermolecular interactions [4, 5]. Typically, most liquid crystalline compounds go through different melting transitions called smectic and nematic phases. The difference between the two phases is primarily related to the arrangement of the molecules within the

crystalline structure (packing order). The scenario of transitions crystalline—nematic—smectic phases occurs at defined temperatures and requires, as the first step, the breakdown of the crystalline order of the solid, causing oscillation, or rapid rotation about a given axis (usually the long axis of the molecules). Next, the long-range positional order is lost resulting in a smec-tic liquid crystal mesophase, which shows only orien-tational and short-range positional order within the diffused layers. The local packing order is then destroyed, except the orientational order on the long axes direction (known as the director of the phase), to give the nematic phase. Finally, all order is lost, forming the isotropic liquid. Normally, one or more smectic phases might be revealed during the melting process; smectic-A, smectic-B, and smectic-C are the most common smectic phases, differing only in their molecular packing order. However, the present molecule taken for investigation undergoes transition from crystalline to nematic without evidence of any smectic properties.

electrostatic, dispersive forces) and entropie ones like positional and orientational distributions. This interplay between energy and entropy controls many complex materials such as liquid crystals. An insight into this aspect provides the information regarding behaviour of chemical systems, through which one can not only design new materials with specific functions, but also the importance of thermodynamic properties in physicochemical processes can be established [7]. Invaluable qualitative and quantitative information can be achieved from thermodynamic data at and in the vicinity of their phase transitions, which provides first evidence on molecular structure [8].

The role of molecular interactions in mesomorphic compounds has engrossed the attention of several workers [9—11] based on the Rayleigh—Schrodinger perturbation method. These studies were aimed at establishing the anisotropic nature of the pair potential, and subsequently finding out the minimum energy configuration of a pair of liquid crystalline molecules. Thus, the main emphasis was laid on finding out the minimum energy with observed crystal structure, the basic motive for ordering of a molecule. It has been observed that the interaction energies for a pair of me-sogens indicate the preference of a particular configuration over the other depending on their energy values. Further, in terms of multipole interactions, significant differences among the energies of various configurations are noticed, which must have a marked affect on entropy of the system. Hence, the relative energies are used as an input to calculate the entropy of 4BAC:

In the present communication, an attempt has been made to describe interactions in a nematogen at molecular level, through which one can simplify the system to make the model computationally feasible in understanding the delicate interplay between energy and entropy that accounts for mesomorphism. The pair interaction energy and entropy between a molecular pair of 4BAC have been determined at an intermediate distance of 6 Á for stacking and 8 Á for inplane interactions. Similarly, a distance of 22 Á has been kept for terminal interactions. The selection of intermolecular separations has been made to allow the

molecule to have full freedom corresponding to rotation and translation relative to each other. The thermodynamic parameters reveal that 4BAC exhibits nematic-isotropic transition temperature at 386 K [12].

The geometry of 4BAC molecule has been constructed on the basis of the published crystallographic data with standard values of bond lengths and bond angles [12]. A number of following methodologies have been employed in this work.

Computation of Atomic Net Charge and Dipole Moments. In order to find the interaction energy of two molecules, it is necessary to compute atomic net charges and dipole moments with an all-valence electron method. Hence, in the present work, the CNDO/2 method [13] was used to compute the net atomic charges and dipole moments at each atomic centre of the molecule because using only the Mulliken atomic net charges (given, for example, by an ab initio program) for the calculation of an electrostatic interaction would be in correct for two reasons: (i) the atomic dipoles must be taken into account, and (ii) the homopolar dipoles must be taken into account, or else atomic net charges obtained according to Lowdin's procedure should be used. An ab initio program which gives only Mulliken net charges is therefore quite misleading as concerns a reasonable representation of the molecular charge distribution in terms of charges and dipoles [14, 15].

Computation of Interaction Energy at Various Configurations. A detailed computational scheme based on simplified formula given by Claverie [16] for evaluating the interaction energy of a molecular pair was used when calculating the energy at fixed configurations. According to the second order of the perturbation theory is modified for intermediate range interactions [17], the total pair interaction energy of molecules (Upmr) is represented as a sum of several terms contributing to the total energy:

where Uel, Upol, Udisp, and Urep are the electrostatic, polarization, dispersion and repulsion energy terms respectively.

In turn, electrostatic term is expressed as

where Uqq, Uqmi, and UMIMI etc. are monopole— monopole, monopole—dipole, and dipole-dipole terms respectively. In fact, the inclusion of higher order multipoles does not affect significantly the electrostatic interaction energy and the calculation involving only the above terms gives satisfactory results [17]. The evaluation of electrostatic term was, therefore, restricted by the dipole-dipole energy term.

In the present work, the dispersion and short-range repulsion terms are considered together because several semiemperical approach, viz. the Lennard-Jones or Buckingham approach, actually proceed in this way. Kitaygorodsky introduced a Buckingham formula whose parameters were later modified by Kitaygorodsky and Mirskay for hydrocarbon molecules and several other molecules, which