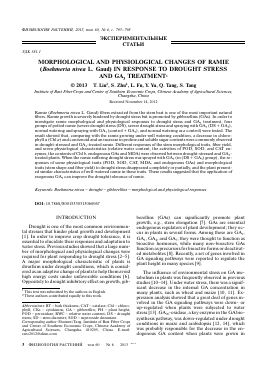 Ramie (Boehmeria nivea L. Gaud) fibers extracted from the stem bast is one of the most important natural fibers. Ramie growth is severely hindered by drought stress but is promoted by gibberellins (GAs). In order to investigate ramie morphological and physiological responses to drought stress and GA3 treatment, four groups of potted ramie (severe drought stress (DS), severe drought stress and spraying with Ga3 (DS + GA3), normal watering and spraying with GA3 (control + GA3), and normal watering as a control) were tested. The result showed that, comparing with the ramie growing under well watering condition, a decrease in chlorophyll a (Chl a) and carotenoid and an increase in proline and soluble sugar contents were commonly observed in drought-stressed and GA3-treated ramie. Different responses of the stem morphological traits, fiber yield, and seven physiological characteristics (relative water content, the activities of POD, SOD, and CAT enzymes, the contents of Chl b, endogenous GAs and MDA) were observed between drought-stressed and GA3-treated plants. When the ramie suffering drought stress was sprayed with GA3 (in (DS + GA3) group), the responses of some physiological traits (POD, SOD, CAT, MDA, and endogenous GAs) and morphological traits (stem shape and fiber yield) to drought stress disappeared completely or partially, and the plant presented similar characteristics of well-watered ramie in these traits. These results suggested that the application of exogenous GA3 can improve the drought tolerance of ramie.

Drought is one of the most common environmental stresses that hinder plant growth and development [1]. In order to improve crop drought tolerance, it is essential to elucidate their responses and adaptation to water stress. Previous studies showed that a large number of morphological and physiological changes were required for plant responding to drought stress [2-5]. A major morphological characteristic of plants is dwarfism under drought conditions, which is considered as an adaptive change of plants to help them avoid high energy costs under unfavorable conditions [6]. Oppositely to drought inhibitory effect on growth, gib-

berellins (GAs) can significantly promote plant growth, e.g., stem elongation [7]. GAs are essential endogenous regulators of plant development; they occur in plants in several forms. Among these are GA1, GA3, GA4, and GA7; they were thought to function as bioactive hormones, while many non-bioactive GAs function as precursors for bioactive forms or deactivated metabolites [8]. Recently, a set of genes involved in GA signaling pathways were reported to regulate the plant height in many species [9].

The influence of environmental stress on GA metabolism in plants was frequently observed in previous studies [10-14]. Under water stress, there was a significant decrease in the internal GA concentration in many plants, such as wheat and maize [10, 11]. Expression analysis showed that a great deal of genes involved in the GA signaling pathways were down- or up-regulated when plants were subjected to water stress [13]. GA20-oxidase, a key enzyme in the GA biosynthesis pathway, was down-regulated under drought conditions in maize and arabidopsis [12, 14], which was probably responsible for the decrease in the endogenous GA content when plants were grown in

drought environment. In addition, the cold stress can up-regulate the expression of GA2-oxidase-encoding gene and lead to a decrease in the bioactive GAs [13]. In contrast, the evidence that exogenous GAs are able to counteract the inhibitory effects of abiotic stress was found in the recent study [15]. Hence, there is a potential cross-talk between environment stress signal and GA signal, resulting in antagonistic interaction to regulate plant growth.

Ramie (Boehmeria nivea), popularly named as "Chinagrass", is a perennial herbaceous plant. Ramie fibers, which are extracted from the stem bast, have the characteristics of being smooth and long and having excellent tensile strength, which make ramie be widely planted in China, India, and other Southeast Asian and Pacific Rim countries. As the ramie fibers are harvested from the stem bark, the fiber yield is greatly dependent on the stem shape, including stem length, diameter, and bark thickness. The previous study showed that there was a significantly positive correlation between fiber yield and stem shape [16].

Plant material, growth conditions, and application of exogenous GA3. Elite ramie (Boehmeria nivea L. Gaud) variety Zhongzhu 1 was used in this study. The cuttage seedlings of Zhongzhu 1 were transplanted to pots in May 2011. In 2012, the potted ramie plants were transferred to a movable rain-off shelter for water stress and spraying with GAs. Four groups of potted ramie, which respectively were severe drought stress (DS), spraying with GA3 under well watering conditions (control + GA3), spraying with GA3 under severe drought stress conditions (DS + GA3), and normal watering as a control, were set up. The severe drought stress was continuously performed by controlling the soil relative water content at a level of no more than 35% until the date of fiber ripeness. In addition, the groups of control and (control + GA3) were normally watered.

Each group was planted with three replications, and each replication comprised 10 potted plants. The plants of (control + GA3) and (DS + GA3) were sprayed (about 4 mL for each plant) with the GA3 of

100 mg/L every other day. When the fiber was ripe, the yield and stem traits were investigated. The plant height (PH) was measured from the ground to the shoot top; stem diameter (SD) and bark thickness (BT) were determined for each stem individually using the Vernier caliper. Each plant fiber was stripped from the stem bark and then was dried and weighed.

Extraction, purification, and determination of GAs in the leaves. Extraction and purification of GAs prior to immunoassay were performed following the methods described by Cao et al. [17]. The content of GAs, including their major forms, was measured with five repeats by the GA assay kit (R&D, United States) based on the double-antibody sandwich enzyme-linked immunosorbent assay (ELISA).

Determination of leaf relative water, photosynthetic pigments, soluble sugar, free proline, and MDA contents. Leaf relative water content (RWC) was calculated based on the methods from Yamasaki and Dillenburg [18]. The photosynthetic pigments (chlorophyll (Chl) a, Chl b, and carotenoids) were extracted from fresh leaves and determined according to Metzner et al. [19]. The water-soluble sugar was quantified by the anthrone sulfuric acid method [20]. The free proline and MDA contents were determined by the ninhydrin and thiobarbituric acid methods, respectively [2]. These physiological indices were expressed on the basis of gram fresh weight. There were three replications for each tested group, and each trait was investigated in five repeats for each replication of each group. Thus, the trait value was presented as the average of fifteen observations for each treatment.

Determination of peroxidase (POD), superoxide dismutase (SOD), and catalase (CAT) activities. The POD, SOD, and CAT activities were estimated according to the description of Chang and Kao [21]. Enzyme activity was expressed per gram fresh weight. The activity of each enzyme was presented as the average of fifteen observations in three replications for each treatment.

MORPHOLOGICAL AND PHYSIOLOGICAL CHANGES OF RAMIE

the BT value of DS plants was the