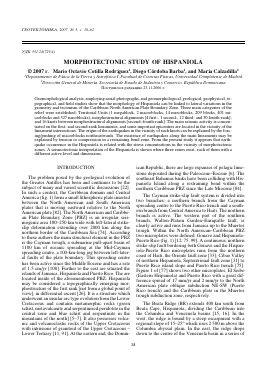 Geomorphological analysis, employing aerial photographs, and geomorphological, geological, geophysical, topographical, and field studies show that the morphology of Hispaniola can be linked to lateral variations in the geometry and tectonism of the Caribbean-North American Plate Boundary Zone. Three main categories of the relief were established: Territorial Units (1 megablock, 2 macroblocks, 14 mesoblocks, 209 blocks, 401 microblocks and 527 nanoblocks); morphostructural alignments [4 first-, 1 second-, 12 third- and 30 fourth-rank]; and 16 knots between morphostructural alignments [second-fourth-rank]. The main seismic activity is concentrated on the first- and second-rank lineaments, and some important epicentres are located in the vicinity of the lineament intersections. The origin of the earthquakes in the vicinity of such knots can be explained by the forcing/pushing of macroblocks northeastwards. The existence of earthquakes along the main lineaments may be explained by tension or compression in a restraining bend zone. From the present study it appears that earthquake occurrence in the Hispaniola is related with the stress concentrations in the vicinity of morphotectonic zones. A seismotectonic interpretation of the Hispaniola is shown where three zones exist, each of them with a different active level and dimensions.

The problem posed by the geological evolution of the Greater Antilles has been and continues to be the subject of many and varied scientific discussions [22]. In such a context, the Caribbean domain and Central America (fig. 1) form a small lithospheric plate inserted between the North American and South American plates that is moving eastward relative to the North American plate [82]. The North American and Caribbean Plate Boundary Zone [PBZ] is an irregular seis-mogenic area 100-250 km wide with left-lateral strike-slip deformation extending over 2000 km along the northern border of the Caribbean Sea [74]. According to these authors the main structural element in the PBZ is the Cayman trough, a submarine pull-apart basin of 1100 km of oceanic spreading at the Mid-Cayman spreading centre, a 100-km-long jog between left-lateral faults of the plate boundary. This spreading centre has been active since the Middle Eocene and has a rate of 1.5 cm/yr [100]. Further to the east are situated the islands of Jamaica, Hispaniola and Puerto Rico. The are located inside of the aforementioned PBZ. Hispaniola may be considered a topographically emerging morphostructure of the first rank [not from a global point of view], in differential ascent [26]. It is a structure which underwent an insular arc type evolution from the Lower Cretaceous and contains metamorphic rocks (green schist, metavulcanite and serpentinised peridotite in the central zone and blue schist and serpentinite in the mountains of the north] [5-7]. It also possesses volcanic and volcanoclastic rocks of the Upper Cretaceous with intrusions of granitoid of the Upper Cretaceous -Lower Tertiary [11, 91]. At the eastern end, the Domin-

ican Republic, there are large expanses of pelagic limestone deposited during the Paleocene-Eocene [6]. The southeast Bahamas banks have been colliding with His-paniola Island along a restraining bend within the northern Caribbean PBZ since the Late Miocene [84].

The Cayman strike-slip fault system is divided into two branches: a northern branch from the Cayman spreading centre to the Puerto Rico trench and a southern branch from Central America to Haiti. The northern branch is active. The western part of the southern branch, Walton-Platain Garden-Enriquillo fault, is clearly active and runs from Jamaica up to the Muertos trough. Within the North American-Caribbean PBZ two microplates were defined: Gonave and Hispaniola-Puerto Rico (fig. 1) [12, 75, 99]. A continuous, northern strike-slip fault bordering both Gonave and the Hispan-iola-Puerto Rico microplates runs from the northern coast of Haiti, the Oriente fault zone [33]; Cibao Valley of northern Hispaniola, Septentrional fault zone [31] to Puerto Rico island slope and Puerto Rico trench [75]. Figure 1 of [77] shows two other microplates, El Seibo (Eastern Hispaniola) and Puerto Rico with a great difference spread of 17 mm/yr and 2 mm/yr to the North American plate oblique subduction NE-SW (Puerto Rico trench) and the Caribbean plate in the Muertos trough subduction zone, respectively.

Fig. 1. Tectonic scheme for a segment of the North American-Caribbean Plate

In this paper we are undertaking a geomorphologi-cal study of Hispaniola Island. The authors present, for the H, a new approach to the study of the neotectonic movements that is based on the principles of morphostructural analysis. These principles were elaborated by [47] and thereinafter developed by [44, 46, 48, 81, 85, 92 and 93], among others. Morphotectonic analysis has as its theoretical basis the set of geostructure, morphostructure and morphosculpture. It is based on the genetic principle of the development of relief, where relief is considered to be the result of the reciprocal action of internal and external processes. According to [1] morphostructural maps can be a starting point to study

many geophysical problems. We consider morphostructures to be the active structures expressed in both of the above-mentioned kinds of evidence.

The Russian methodology has been successfully applied in other regions, such as: Spain [24, 25], Eastern Europe [45], Cuba [52], the Pyrenees [49] and the Western Alps [21]. Also, researchers have developed a system for the categorization of the intersections of lineaments [26]. Such research considers that strong earthquakes are associated with disjunctive knots [117], neotectonic structures that are formed around the intersections of the largest lineaments [110]. The physical mechanism of knot formation was first introduced by [79], but [41] discussed the concentration for strong earthquakes in such structures. Nevertheless, it should be emphasized that morphostructural zoning is performed without reference to seismicity data in the study region.

The aim of this paper is to determine the most active morphostructural units, in order to set preliminary cri-

teria for the identification of probable sites for the occurrence of earthquakes and to gain a better understanding of current tectonic processes in an area of moderate present-day seismicity. The Hispaniola offers a good opportunity for this type of study because the geologic structure of the region is reasonably well-mapped and understood. Our field studies in the Hispaniola took place in 2005 and 2006.

DESCRIPTION OF THE DATA AND METHODOLOGY

The setting of multidisciplinary criteria for the determination of zones of greater probability of earthquake occurrence is a fundamental component of morphostructural analysis [19], manifesting the existence of the system: morphostructure - recent tectonic movements - seismicity [38]. Modern morphotectonic studies have additional aims, which include the statement of both concepts and methods as well as practical applications [19]. Specifically, morphostructural methodology with a seismotectonic purpose involves four principal stages: 1) methods (selection and ap