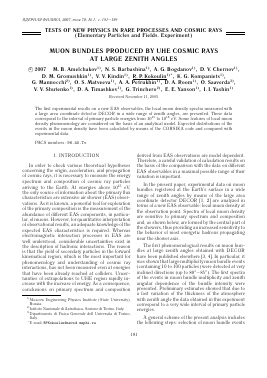 The first experimental results on a new EAS observables, the local muon density spectra measured with a large area coordinate detector DECOR in a wide range of zenith angles, are presented. These data correspond to the interval of primary particle energies from 1015 to 1018 eV. Some features of local muon density phenomenology are considered on the basis of an analytical model. Expected distributions of the events in the muon density have been calculated by means of the CORSIKA code and compared with experimental data.

In order to check various theoretical hypotheses concerning the origin, acceleration, and propagation of cosmic rays, it is necessary to measure the energy spectrum and composition of cosmic ray particles arriving to the Earth. At energies above 1015 eV, the only source of information about the primary flux characteristics are extensive air shower (EAS) observations. As it is known, a powerful tool for exploration of the primary composition is the measurement of the abundance of different EAS components, in particular, of muons. However, for quantitative interpretation of observational results, an adequate knowledge of the expected EAS characteristics is required. Whereas electromagnetic interaction processes in EAS are well understood, considerable uncertainties exist in the description of hadronic interactions. The reason is that the yield of secondary particles in the forward kinematical region, which is the most important for phenomenology and understanding of cosmic ray interactions, has not been measured even at energies that have been already reached at colliders. Uncertainties of extrapolations to UHE region rapidly increase with the increase of energy. As a consequence, conclusions on primary spectrum and composition

derived from EAS observations are model dependent. Therefore, a careful validation of calculation results on the basis of the comparison with the data on different EAS observables in a maximal possible range of their variation is important.

In the present paper, experimental data on muon bundles registered at the Earth's surface in a wide range of zenith angles by means of the large area coordinate detector DECOR [1,2] are analyzed in terms of a new EAS observable: local muon density at the observation point. Spectra of local muon density are sensitive to primary spectrum and composition and, as shown below, are formed by the central part of the showers, thus providing an increased sensitivity to the behavior of most energetic hadrons propagating near the shower axis.

The first phenomenological results on muon bundles at large zenith angles obtained with DECOR have been published elsewhere [3, 4]. In particular, it was shown that large multiplicity muon bundle events (containing 10 to 100 particles) were detected at very inclined directions (up to 80° —85°). The first spectra of the events in muon bundle multiplicity and zenith angular dependence of the bundle intensity were presented. Preliminary estimates showed that due to a fast variation of the thickness of the atmosphere with zenith angle the data obtained in this experiment correspond to a very wide interval of primary particle energies.

A general scheme of the present analysis includes the following steps: selection of muon bundle events

Fig. 1. Contribution of various distances to the total number of muons (solid curve) and to the local density spectrum (dashed curve). Muon LDF has been calculated by means of CORSIKA for 1017-eV primary protons at 60° with hadronic interaction models QGSJET + GHEISHA.

and construction of distributions in bundle multiplicity, zenith and azimuth angles; iterative decon-volution of the measured distributions to detector-independent spectrum of local muon density for several zenith angle intervals; simulation of muon lateral distribution functions (LDF) for different primary particles, energies, and different hadronic interaction models by means of the CORSIKA code [5]; calculation of expected local muon density spectra on the basis of convolution of LDF with a certain primary spectrum and composition model; comparison between experimental and calculation results.

As a basis of the analysis of the data on muon bundles, a new phenomenological parameter (local density of muons at the observation point) is used. At large zenith angles, the size of the detector is usually small compared to typical distances of substantial changes of muon LDF, therefore the detector may be considered as a point-like probe. In a first approximation, the local muon density (number of muons per unit area) in the event is estimated as the ratio of the number of muons that hit the detector (muon bundle multiplicity) to the effective detector area in a given direction. Contribution to the flux of the events with a fixed local density is given by the showers with different primary energies detected at different (random) distances from the shower axis; however, due to a fast decrease of the cosmic ray flux with the increase of energy, the effective interval of primary particle energies is relatively narrow.

The main features of the phenomenology of local muon density spectra may be illustrated by means of a following analytical consideration. Without taking into account the fluctuations of the shower development in the atmosphere, the integral spectrum of the events in muon density D may be written as

here, r is the distance between the observation point and EAS axis, N(>E) is the integral primary energy spectrum, and the minimal energy E is defined by the solution of the equation

where p(E, r) is muon LDF in a plane orthogonal to the shower axis. As it is seen from (1), the integral local muon density spectrum is expressed as the number of events per unit solid angle and unit time interval. The differential density spectrum dF/dD

may be easily obtained as derivative of (1):

where the relation between E and D is defined by (2).

Assuming nearly scaling behavior of muon LDF with primary energy, the LDF may be approximately parametrized as

where p0(r) is the normalized LDF, n0 is proportionality coefficient, and k ~ 0.9; the values of these

we obtain the following formula for the local muon density spectrum:

This expression has to be compared with the distribution of EAS in the total number of muons ntot. Within the frames of approximations listed above, the integral spectrum of showers in the total muon size is given by

The distinctive and important feature of the local muon density spectrum is that it is sensitive to the shape of the muon LDF, since in the integrand of (6) the normalized muon density enters with the power index /3 ~ 2. Contribution of various distances r from the axis to the total number of muons and to the local muon density distribution is illustrated by Fig. 1. The abscissa is plotted in logarithmic scale, therefore the respective functions are additionally multiplied by r. As it is seen from the figure, the spectrum of local muon density is determined by substantially smaller distances (approximately 10 times) than the total number of muons. Thus, selection of the events by the muon density enhances the sensitivity of the measured distributions to the central part of the shower. High-energy muons propagating near the shower axis are probes of the early stages of the shower development governed by high-energy hadronic interactions, therefore experimental data on muon density spectra provide an additional tool for tests of the validity of hadronic interaction models in the forward region.

Data collected during long-term experimental runs (10 579-h live time) with the NEVOD-DECOR complex in 2002-2004 have been used for the present analysis. A general layout of the setup is shown in Fig. 2. The coordinate detector DECOR [1, 2] represents a modular multilayer system of plastic