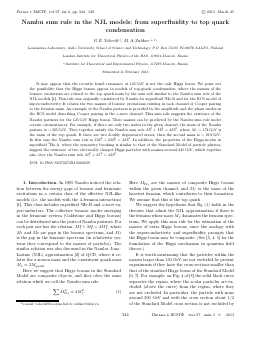 Nambu sum rule in the NJL models: from superfluidity to top quark

Landau Institute for Theoretical Physics of the RAS, 119334 Moscow, Russia

It may appear that the recently found resonance at 125 GeV is not the only Higgs boson. We point out the possibility that the Higgs bosons appear in models of top-quark condensation, where the masses of the bosonic excitations are related to the top quark mass by the sum rule similar to the Nambu sum rule of the NJL models [1]. This rule was originally considered by Nambu for superfluid 3He-B and for the BCS model of superconductivity. It relates the two masses of bosonic excitations existing in each channel of Cooper pairing to the fermion mass. An example of the Nambu partners is provided by the amplitude and the phase modes in the BCS model describing Cooper pairing in the s-wave channel. This sum rule suggests the existence of the Nambu partners for the 125 GeV Higgs boson. Their masses can be predicted by the Nambu sum rule under certain circumstances. For example, if there are only two states in the given channel, the mass of the Nambu partner is ~ 325 GeV. They together satisfy the Nambu sum rule M2 + = 4M?, where Mt ~ 174 GeV is the mass of the top quark. If there are two doubly degenerated states, then the second mass is ~ 210 GeV. In this case the Nambu sum rule is 2 M2 + 2M| = 4Mt2. In addition, the properties of the Higgs modes in superfluid 3He-A, where the symmetry breaking is similar to that of the Standard Model of particle physics, suggest the existence of two electrically charged Higgs particles with masses around 245 GeV, which together also obey the Nambu sum rule M+ + M- = 4Mt2.

1. Introduction. In 1985 Nambu noticed the relation between the energy gaps of bosonic and fermionic excitations in a certain class of the effective NJL-like models (i.e. the models with the 4-fermion interaction) [1]. This class includes superfluid 3He-B and s-wave superconductors. The collective bosonic modes emerging in the fermionic system (Goldstone and Higgs bosons) can be distributed into the pairs of Nambu partners. For each pair one has the relation, M2 + M| = 4M|, where M1 and M2 are gaps in the bosonic spectrum, and Mf is the gap in the femionic spectrum (in relativistic systems they correspond to the masses of particles). The similar relation was also discussed in the Nambu-Jona-Lasinio (NJL) approximation [2] of QCD, where it relates the a-meson mass and the constituent quark mass Ma « 2Mquark.

Here we suggest that Higgs bosons in the Standard Model are composite objects, and they obey the same relation which we call the Nambu sum rule

Here MH}i are the masses of composite Higgs bosons within the given channel, and Mf is the mass of the heaviest fermion, which contributes to their formation. We assume that this is the top quark.

We suggest the hypothesis that Eq. (1) holds in the theories that admit the NJL approximation if there is the fermion whose mass Mf dominates the fermion spectrum. We apply this sum rule for the estimation of the masses of extra Higgs bosons, since the analogy with the superconductivity and superfluidity prompts that the Higgs boson may be composite. (See [3, 4, 5] for the foundation of the Higgs mechanism in quantum field theory.)

It is worth mentioning that the particles within the masses larger than 130 GeV are not excluded by present experiments if they have the cross-sections smaller than that of the standard Higgs boson of the Standard Model [6, 7]. For example, on Fig. 4 of [8] the solid black curve separates the region, where the scalar particles are excluded (above the curve) from the region, where they are not excluded. In particular, the particle with mass around 200 GeV and with the cross section about 1/3 of the Standard Model cross section is not excluded by

The Nambu sum rule Eq. (1) gives an important constraint on the bosonic spectrum. For example, if there are only two states in the channel that contains the discovered 125 GeV Higgs boson, then the partner of this boson should have the mass around 325 GeV. Surprisingly, in 2011 the CDF collaboration [10] has announced the preliminary results on the excess of events in ZZ ^ llll channel at the invariant mass « 325 GeV. CMS collaboration also reported a small excess in this region [11]. In [12, 13] it was argued that this may point out to the possible existence of a new scalar particle with mass MH2 ~ 325 GeV. If there are two (doubly degenerated) Higgs bosons in the channel that contains the 125 GeV Higgs, then the partner of the 125 GeV boson should have mass around 210 GeV. (This possibility is realized in the model of Section 5 of the present paper.) In the channel with two states of equal masses the 245 GeV Higgs bosons should appear in analogy with 3He-A considered in Section 3. A certain excess of events in this region has been observed by ATLAS in 2011 (see, for example, [14]).

We review several models, where the Nambu sum rule holds. The paper is organized as follows. In Section 2 we consider the appearance of the Nambu Sum rule in 3He-B mentioned originally by Nambu. In Section 3 we consider the 3D A-phase of the superfluid 3He. In this case the fermions are gapless. However, the Nambu sum rule Eq. (1) works if in its r.h.s. the average of the angle dependent energy gap is substituted. In Section 4 we review bosonic excitations and Nambu sum rules in the 2D thin films of He-3. There are two main phases, where the Nambu sum rule works within the effective four-fermion model similar to that of 3He-B. In Section 5 we consider how the sum rule Eq. (1) appears in its nontrivial form in the relativistic NJL model. Namely, we deal with the particular case considered in [15] of the model of the top-quark condensation suggested in [16]. (This model is the direct generalization of the original model of [17] to the case, when all 6 quarks are included.) In Section 6 we review results on the bosonic excitations in dense quark matter. We consider diquarks in Hadronic phase and the color superconductor in the so-called Color-Flavor Locking (CFL) phase. In Section 7 we compare Veltman relation for the vanishing of quadratic divergences to the scalar boson mass with the Nambu sum rule. In Section 8 we end with the conclusions.

2. Nambu sum rules in 3He-B. In the B-phase of 3He the condensate is formed in the spin-triplet p-wave state, which is characterized by the quantum numbers

Here the first term corresponds to the equilibrium state, with A being the gap in the fermionic spectrum. The other two terms are the deviations from the equilibrium. They represent 18 collective bosonic modes, which are classified by the total angular momentum quantum number J = 0,1,2. At each value of J = 0,1,2 the modes u and v are orthogonal to each other and correspond to different values of the bosonic energy gaps. Four modes are gapless. They represent Goldstone bosons, which result from the symmetry breaking. The other 14 modes are Higgs bosons with non-zero gaps. (Higgs bosons in other condensed matter systems have been discussed in recent papers [19-21] and in references therein.)

The energy gaps of bosons in 3He-B are given by:

For J = 0 there is one pair of the Nambu partners (the gapless Goldstone sound mode and the Higgs mode, which is called the pair-breaking mode):

Zeeman splitting of imaginary squashing mode in magnetic field has been observed in [22], for the latest experiments see [23].

The A-phase is anisotropic. The special direction in the orbital space appears that is identified with the direction of the spontaneous orbital angular momentum of Cooper pairs, which is here chosen along the axis z. In this phase fermions are gapless: the gap in the fermionic spectrum depends on the angle between the momentum k and the anisotropy axis, A(0) = Ao sin 0, and nullifies at sin 0 = 0. The spectrum of the collective modes has been considered in [25],