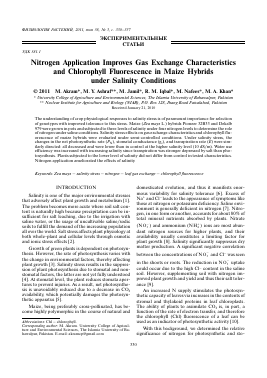 The understanding of crop physiological responses to salinity stress is of paramount importance for selection of genotypes with improved tolerance to this stress. Maize (Zea mays L.) hybrids Pioneer 32B33 and Dekalb 979 were grown in pots and subjected to three levels of salinity under four nitrogen levels to determine the role of nitrogen under saline conditions. Salinity stress effects on gas exchange characteristics and chlorophyll fluorescence of maize hybrids were evaluated under semi-controlled conditions. Under salinity stress, the changes in the net photosynthetic rate (PN), stomatal conductance (gs), and transpiration rate (E) were similarly directed: all decreased and were lower than in control at the higher salinity level (10 dS/m). Water use efficiency was increased with increasing salinity since transpiration was stronger depressed by salt than photosynthesis. Plants subjected to the lower level of salinity did not differ from control in tested characteristics. Nitrogen application ameliorated the effects of salinity.

Salinity is one of the major environmental stresses that adversely affect plant growth and metabolism [1]. The problem becomes more acute where soil salt content is naturally high because precipitation can be insufficient for salt leaching, due to the irrigation with saline water, or the usage of uncultivable saline/sodic soils to fulfill the demand of the increasing population all over the world. Salt stress affects plant physiology at both whole-plant and cellular levels through osmotic and ionic stress effects [2].

Growth of green plants is dependent on photosynthesis. However, the rate of photosynthesis varies with the change in environmental factors, thereby affecting plant growth [3]. Salinity stress results in the suppression of plant photosynthesis due to stomatal and non-stomatal factors, the latter are not yet fully understood [4]. At stomatal level, the plant reduces stomata apertures to prevent injuries. As a result, net photosynthesis is unavoidably reduced due to a decrease in CO2 availability, which potentially damages the photosyn-thetic apparatus [5].

Maize, being preferably cross-pollinated, has become highly polymorphic in the course of natural and

domesticated evolution, and thus it manifests enormous variability for salinity tolerance [6]. Excess of Na+ and Cl- leads to the appearance of symptoms like those at nitrogen or potassium deficiency. Saline environment is generally deficient in nitrogen [7]. Nitrogen, in one form or another, accounts for about 80% of total mineral nutrients absorbed by plants. Nitrate

between the concentrations of N O- and Cl- was seen

in the shoots or roots. The reduction in N O- uptake

could occur due to the high Cl- content in the saline soil. However, supplementing soil with nitrogen improved plant growth and yield and thus their salt tolerance [9].

An increased N supply stimulates the photosyn-thetic capacity of leaves via increases in the contents of stromal and thylakoid proteins in leaf chloroplasts. The ability of plants to assimilate CO2 is, in part, a function of the rate of electron transfer, and therefore the chlorophyll (Chl) fluorescence of a leaf can be used as an indicator of photosynthetic activity [10].

With this background, we determined the relative significance of nitrogen for photosynthetic and sto-

matal parameters in improving salt tolerance in contrasting maize hybrids. We hypothesized that the information on possible involvement of gas exchange characteristics in salt stress tolerance should provide an insight for understanding the mechanism of plant tolerance. Improved maize hybrids may play an important role in remediation of saline and other degraded soils. Consequently, we hypothesize that an understanding of the physiological responses of crop plants to salinity stress, associated with salt tolerance, will help plant breeders in further genotype improvement and crop physiologists and agronomists to develop best management options to cope with environment-induced abiotic stresses.

The experiment was conducted under natural conditions in the wire house of Plant Stress Physiology Laboratory at Nuclear Institute for Agriculture and Biology (NIAB), Faisalabad, Pakistan. Maize (Zea mays L.) hybrids Pioneer 32B33 (salt-tolerant) and Dekalb 979 (salt-sensitive) were grown in the pots 24.5 cm in diameter and 28 cm in height. The pots were filled with 12 kg of sandy loam soil having a bulk density of 1500 kg/m3, EC 1.09 dS/m, pH 7.7, and SAR 10.9. Soil field capacity was 16.35%, and the saturation was 35%. After germination, four plants were maintained in each pot, and recommended doses of fertilizers were applied at appropriate time. Three salinity (NaCl) levels, S0 (control, 1.09 dS/m), S1 (5 dS/m), and S2 (10 dS/m), were developed by adding the calculated amount of NaCl to soil. Four nitrogen levels (N0, N1, N2, and N3 (without application and with application of 175, 225, and 275 kg N/ha)) were used in the present study. Salinity level of 5 dS/m, was developed before sowing the seeds by mixing the calculated amount of salt (NaCl) with soil; this salinity treatment was applied for 25 days after sowing. Nitrogen was applied to the plants in splits, e.g., 1/3 at sowing, 1/3 at knee height, and 1/3 at tasseling stage. The phosphorus and potassium were applied at the recommended rate, e.g., 125 kg/ha each. The whole phosphorus and potassium were applied at sowing time. The nitrogen, phosphorus, and potassium were used in the form of ammonium nitrate, single superphosphate (SSP), and sulfate of potash (SOP). The experiment was laid out in a three factor completely randomized design (CRD). There were three replicates for each treatment. Plants were irrigated with water when required. Observations were recorded on fully expanded top third leaves at tasseling stage.

Water use efficiency (WUE) was calculated using the relationship PN/E [11].

Saturating pulses were utilized in order to obtain F'm following each actinic irradiation. When the actinic radiation was removed, then the minimum Chl fluorescence in the light-adapted state (F0) was determined by irradiating the leaf disk for 3 s with far-red radiation. The maximum efficiency of PS2 photochemistry (Fv/Fm) was calculated according to [12].

The net rate of photosynthesis