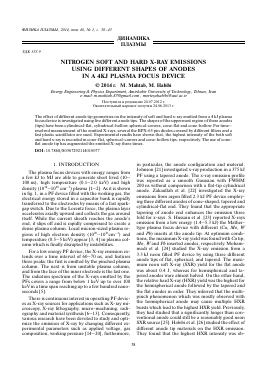 The effect of different anode tip geometries on the intensity of soft and hard x-ray emitted from a 4 kJ plasma focus device is investigated using five different anode tips. The shapes of the uppermost region of these anodes (tips) have been cylindrical-flat, cylindrical-hollow, spherical-convex, cone-flat and cone-hollow. For time-resolved measurement of the emitted X-rays, several the BPX-65 pin diodes covered by different filters and a fast plastic scintillator are used. Experimental results have shown that, the highest intensity of the both soft and hard x-ray is recorded in cone-flat, spherical-convex and cone-hollow tips, respectively. The use of cone-flat anode tip has augmented the emitted X-ray three times.

The plasma focus devices with energy ranges from a few kJ to MJ are able to generate short lived (10— 100 ns), high temperature (0.1—2.0 keV) and high density (1018—1020 cm-3) plasma [1—2]. As it is shown in fig. 1, in a PF device filled with the working gas, the electrical energy stored in a capacitor bank is rapidly transferred to the electrodes by means of a fast spark-gap switch. Due to the Lorentz force, the plasma layer accelerates axially upward and collects the gas around itself. While the current sheath reaches the anode's end, it slips off and is rapidly compressed to create a dense plasma column. Local micron-sized plasma regions of high electron density (1020—1021cm-3) and temperature (0.5—5 keV) appear [3, 4] in plasma column which is finally disrupted by instabilities.

For a low energy PF device, the X-ray emission extends over a time interval of 60—70 ns, and features three peaks: the first is emitted by the pinched plasma column. The next is from unstable plasma column, and from the face of the inner electrode is the last one. The radiation spectrum of the X-rays emitted by the PFs covers a range from below 1 keV up to over 100 keV in a time span reaching up to a few hundred nanoseconds [5].

There is continuous interest in operating PF devices as X-ray sources for applications such as X-ray microscopy, X-ray lithography, micro-machining, radiography and material synthesis [6—13]. Consequently, various research have been devoted to study and optimize the emission of X-ray by changing different experimental parameters such as applied voltage, gas composition, working pressure [14—20], furthermore,

in particular, the anode configuration and material. Johnson [21] investigated x-ray production in a 375 kJ PF using a tapered anode. The x-ray emission profile was reported as a smooth Gaussian with FWHM 200 ns without comparison with a flat-tip cylindrical anode. Zakaullah et al. [22] investigated the X-ray emissions from argon filled 2.3 kJ PF device employing three different anodes of cone-shaped, tapered and cylindrical-flat end. They found that the appropriate tapering of anode end enhances the emission three fold for x-rays. S. Hussain et al. [23] reported X-rays emission from a low energy (1.4—5.3 kJ) the Mather-type plasma focus device with different (Cu, Mo, W and Pb) inserts at the anode tip. At optimum conditions, the maximum X-ray yield was found with Cu tip, Mo, Wand Pb inserted anodes, respectively. Moham-madi et al. [24] studied the X-ray emission from a 3.3 kJ neon filled PF device by using three different anode tips of flat, spherical, and tapered. The maximum neon soft X-ray (SXR) yield for the flat anode was about 0.4 J, whereas for hemispherical and tapered anodes ware almost halved. On the other hand, the relative hard X-ray (HXR) yield was the highest for the hemispherical anode followed by the tapered and the flat anodes in order. They inferred that the multi-pinch phenomenon which was mostly observed with the hemispherical anode may cause multiple HXR bursts which lead to the highest HXR yield. Previously, they had studied that a significantly longer than conventional anode could still be a reasonably good neon SXR source [25]. Habibi et al. [26] studied the effect of different anode tip materials on the HXR emission. They found that the highest HXR intensity was ob-

In this work, knowing the fact that the X-ray intensity varies by the anode shape, we focused our attention to find out the best anode tip among five configurations to modify the PF device as an intense X-ray source.

The APF device was made based on a 4 kJ PF system powered by a single V0 = 15 kV, C0 = 40 ^F and L0 = 30 nH capacitor with a total inductance of 110 nH. The inner electrode is a copper cylinder with diameter of 20 mm and length of 148 mm. The outer electrode is composed of six copper rods which form the shape of a squirrel cage with an inner diameter of 44 mm. In addition, anode and cathode are separated by a Pyrex tube of 48 mm length [27]. Since the impurities have significant effects on the output radiation, the chamber is evacuated to the pressure of 10-3 Torr after each 5 shots. Then, it is refilled with fresh nitrogen gas. The focusing action of discharge current was monitored using a Rogowski coil to ensure efficient energy transfer, and the best performance of the device. As shown in Fig. 2, the typical peak current and rise time are 210 kA and 2.1 ^s respectively.

For the time resolved SXR measurement, several PIN photodiodes of the BPX-65 type biased at -40 V and covered by different X-ray filters are used. Applied filters are: Aluminum-Mylar (^/-My) with a thickness of 12, 24 and 150 ^m and copper (Cu) with 10 ^m thickness. The energy responses of the photodiodes with and without their associated absorption filters are shown in fig. 4 and shows that the detector response is too low to consider for energies more than about 12 keV. A fast plastic scintillation detector (NE102A, a 5 cm long, 5 cm diameter cylinder), coupled with high gain photomultiplier tube (PM-53) biased at -1.2 kV, is used for the time resolved HXR measurement. The scintillation detector is located at a distance of 1 m

from the window while the glass window represents an X-ray filter with an energy threshold of 20 keV.

Two four-channel 200 MHz TDS 2024 and 100 MHz TDS 2014 oscilloscopes are used to record all electrical signals. The peak detection and integration of the data was performed by using the SAP-ALCOR 9.20 software which has been developed in the AmirKabir plasma Laboratory [28].

The experiments were performed in the APF device filled with nitrogen gas in a pressure range of 2— 7.5 mbar. Three voltage levels of 11, 12 and 13 kV are used as discharge voltage. For each discharge voltage, the nitrogen filling pressure range was scanned and five shots were recorded for each selected pressure value. All oscilloscopes were triggered simultaneously by the signal of the Rogowski coil. The typical recorded PIN diode and scintillator signals for cone flat anode are shown in Fig. 5. For the conventional cylindrical-flat anode, the variation of X-ray intensity versus pressure and discharge voltage is shown in Fig. 6 in which each point of the curves is the representative of averaged areas under recorded signals.

The change in soft and hard X-ray intensity resulted from different anode tips in respect to pressure is plotted in Figs. 7 and 8. They obviously show that the optimum pressure, in which the highest intensity is obtained, depends on the inserted anode tip. The value of these highest intensities at the exemplary discharge voltage of 13 kV is presented in the table to give more quantitative aspect. The values are also normalized to the cylindrical-flat anode which is commonly used in most PF devices.

On the basis of results, conical or spherical anode tips exhibit a considerable increase in emitted X-ray compared with conventional cylindrical anodes. The both soft and hard X-ray intensities are seen to be max for the cone-flat anode, while it is the lowest in the cylindrical-hollow one.

responce of the BPX65 Pin Diode with Applied Filters