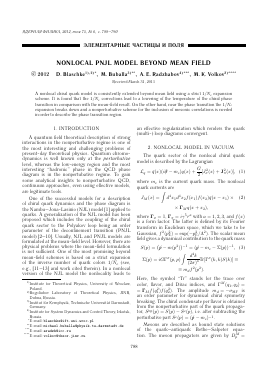 A quantum field theoretical description of strong interactions in the nonperturbative regime is one of the most interesting and challenging problems of present-day theoretical physics. Quantum chromo-dynamics is well known only at the perturbative level, whereas the low-energy region and the most interesting "hadronic" phase in the QCD phase diagram is in the nonpertubative regime. To gain some analytical insights to nonperturbative QCD, continuum approaches, even using effective models, are legitimate tools.

One of the successful models for a description of chiral quark dynamics and the phase diagram is the Nambu—Jona-Lasinio (NJL) model [ 1] applied to quarks. A generalization of the NJL model has been proposed which includes the coupling of the chiral quark sector to the Polyakov loop being an order parameter of the deconfinement transition (PNJL model) [2-10]. Usually, NJL and PNJL models are formulated at the mean-field level. However, there are physical problems where the mean-field formulation is not sufficient. One of the most promising beyond mean-field schemes is based on a strict expansion of the inverse number of quark colors 1/Nc (see, e.g., [11-13] and work cited therein). In a nonlocal version of the NJL model the nonlocality leads to

where mc is the current quark mass. The nonlocal quark currents are

Here, the symbol "Tr" stands for the trace over color, flavor, and Dirac indices, and rM(q\,q2) = = Tmf(q2)f(q2). The amplitude md = -^mf is an order parameter for dynamical chiral symmetry breaking. The chiral condensate per flavor is obtained from the nonperturbative part of the quark propagator, 5np(p) = S(p) — Sc(p), i.e. after subtracting the perturbative part Sc(p) = (p — mc)-1.

Mesons are described as bound state solutions of the quark—antiquark Bethe-Salpeter equation. The meson propagators are given by DM =

denote the latter as A subtractive renormalization constant Q0 is chosen such that the vacuum (T = 0) has vanishing pressure.

The thermodynamic equilibrium corresponds to the (global) minimum of the thermodynamic potential with respect to the full quark propagator and to the Polyakov loop, so that the following necessary conditions (gap equations) must be fulfilled

As usual in the systematic 1/Nc expansion, the four-quark coupling constant G is considered to be of the order 1/Nc. In this case the Nc behavior of pion properties calculated in the model coincides with leading-order QCD calculations (/,T ~ VNc)- As a result, any meson propagator line in diagrams has a 1/Nc suppression factor.

The model can easily be extended to finite temperature using a ^-derivable ansatz (see, e.g., [14]) supplemented by the 1/Nc expansion. The central quantity for the analysis is the thermodynamic potential per volume

where S and S = (5c)-1 — S-1 are the full propagator and the quark self-energy, respectively, and "Tr" denotes the trace over all degrees of freedom, internal ones and 4-momenta. At nonzero temperature, we also take into account the Polyakov-loop dynamics, which at T = 0 decouples from the quark sector. To that end a constant temporal background gauge field ft = {A4) = {iA0) is minimally coupled to the quarks and a Polyakov-loop potential U($, $) is added in Eq. (4). Here

denotes the Polyakov-loop expectation value and $ its conjugate. In order to avoid confusion with the potential of the ^-derivable scheme ("$ functional"), we

Approximations can be introduced by truncating ^ at a certain order. In the present paper, we use a "strict 1/Nc expansion", where all contributions beyond the next-to-leading order are discarded. Thus, one gets for the thermodynamic potential

Including the gluon background, we suggest to treat the Polyakov-loop potential as effectively Nc independent5^ A strict 1/Nc expansion of the ther-modynamic potential then corresponds to evaluate

5)In principle the U(", "I") is proportional to the number of gluons, NC — 1 [15—16]. Its leading contribution to the thermodynamic potential is therefore of the order O(N?), while the quarks only contribute at the order O(Nc) and corrections are of the order O(N0) for both quarks and glu-ons. However, since in practice the detailed form of U is not based on a 1/Nc expansion, but rather a phenomenological parameterization fitted to quenched lattice data, we believe that it is more appropriate to treat it as Nc independent in the present context.

the 1/Nc corrections are absolutely crucial to achieve this agreement.

We thank D. Muller, J. Wambach, and R. Williams for critial remarks and illuminating discussions. A.E.R. is grateful for the hospitality extended to him during visits at the TU Darmstadt and at the University of Wroclaw. This work was supported in part by a grant from the Polish Ministry for Science and Higher Education and by the ExtreMe Matter Institute (EMMI). D.B. acknowledges support from RFBR grant no. 11-02-01538-a.

Fig. 2. Temperature dependence of the quark condensate normalized to its vacuum value A = {qq)T/{qq) (thick solid curve) and the Polyakov loop (dashed curve) in the nonlocal PNJL model beyond mean field. Furthermore shown are the mean-field A (dash-dotted curve), the lowest-order chiral perturbation theory (xPT) result (dotted curve), and a naive polynomial interpolation in the unstable region of the 1/Nc expansion (thin solid curve).

Eq. (6) for the simultaneous solutions of the gap equations

Note that <^3 is determined by minimizing the total thermodynamic potential, whereas md is obtained from the mean-field part only. Nevertheless, since Qmf also depends on 03, the value of md is changed as well compared to the mean-field calculation, due to the modified value of 03. For the Polyakov-loop potential U($, we adopt the logarithmic form of [6].

The model predictions for the pressure are shown in Fig. 1. Together with full result the partial contributions to the pressure pMF = — QMF and pNc = —QNc are also shown. In Fig. 2 we show the temperature dependence of the quark condensate {qq)T and of the Polyakov-loop expectation value. In both figures we have also indicated the predictions of lowest-order chiral perturbation theory. At low temperatures, these are well reproduced by the nonlocal model. Note that