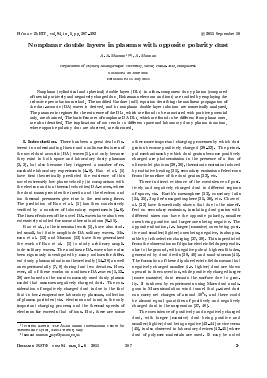 Nonplanar double layers in plasmas with opposite polarity dust

Nonplanar (cylindrical and spherical) double layers (DLs) in a four-component dusty plasma (composed of inertial positively and negatively charged dust, Boltzmann electrons and ions) are studied by employing the reductive perturbation method. The modified Gardner (mG) equation describing the nonlinear propagation of the dust-acoustic (DA) waves is derived, and its nonplanar double layer solutions are numerically analyzed. The parametric regimes for the existence of the DLs, which are found to be associated with positive potential only, are obtained. The basic features of nonplanar DA DLs, which are found to be different from planar ones, are also identified. The implications of our results to different space and laboratory dusty plasma situations, where opposite polarity dust are observed, are discussed.

I. Introduction. There has been a great deal of interest in understanding linear and nonlinear features of the novel dust acoustic (DA) waves [1], not only because they exist in both space and laboratory dusty plasmas [2, 3], but also because they triggered a number of remarkable laboratory experiments [4-8]. Rao et al. [1] have first theoretically predicted the existence of this novel extremely low phase velocity (in comparison with the electron and ion thermal velocities) DA-waves, where the dust mass provides the inertia and the electron and ion thermal pressures give rise to the restoring force. The prediction of Rao et al. [1] has then conclusively verified by a number of laboratory experiments [4-6]. The linear features of the novel DA-waves have also been extensively studied for some other situations [9-11].

Rao et al., in their seminal work [1], have also studied small, but finite amplitude DA solitary waves. Mamun et al. [12] and Mamun [13] have then generalized the work of Rao et al. [1] to study arbitrary amplitude solitary waves. The nonlinear DA-waves have also been rigorously investigated by many authors for different dusty plasma situations theoretically [14-28] as well as experimentally [7, 8] during last two decades. However, all of these works on nonlinear DA-waves [1,1228] are based on the most commonly used dusty plasma model that assumes negatively charged dust. The consideration of negatively charged dust is due to the fact that in low-temperature laboratory plasmas, collection of plasma particles (viz. electrons and ions) is the only important charging process, and the thermal speeds of electrons far exceeds that of ions. But, there are some

There is direct evidence of the coexistence of positively and negatively charged dust in different regions of space, viz. Earth's mesosphere [33], cometary tails [34, 35], Jupiter's magnetosphere [35, 36], etc. Chow et al. [32] have theoretically shown that due to the size effect on secondary emission, insulating dust grains with different sizes can have the opposite polarity, smaller ones being positive and larger ones being negative. The opposite situation, i.e. larger (massive) ones being positive and smaller (lighter) ones being negative, is also possible by triboelectric charging [37, 38]. This is predicted from the observations of dipolar electric fields perpendicular to the ground, with negative pole at higher altitudes, generated by dust devils [39, 40] and sand storms [41]. The formation of these dipolar electric fields means that negatively charged smaller (i.e. lighter) dust are blown upward in the convection, while positively charged larger (more massive) dust remain the surface due to gravity. It is shown by experiments using Mars dust analogous in Mars simulation wind tunnel that /¿-sized dust can carry net charges of around 105e, and there could be almost equal quantities of positively and negatively charged dust in the suspension [37, 40].

The coexistence of positively and negatively charged dust, with larger (massive) dust being positive and smaller (lighter) dust being negative [42-44] or vice versa [45], is also observed in laboratory devices [42-45] where dust of polymer materials are used. It may be noted

Recently, motivated by these theoretical predictions and satellite/experimental observations, a number of authors [37,47-52] have considered a dusty plasma with dust of opposite polarity, and have investigated linear [48, 37] and nonlinear [47,49-52] DA-waves. However, all of these studies are limited to one-dimensional planar geometry, which may not be the realistic situation in space and laboratory devices, since the waves observed in space (laboratory devices) are certainly not infinite (unbounded) in one-dimension (ID). The most of these works on nonlinear DA-waves are also concerned with either solitary or shock structures, but not with double layers. Therefore, in our present work, we consider a dusty plasma system (consisting of positively and negatively charged dust fluid, Boltzmann electrons and ions) and a more general geometry (which is valid for both planar, cylindrical and spherical geometries), and theoretically study the basic features of the DA DLs that are found to exist in such a realistic novel dusty plasma system.

II. Governing Equations. We consider the nonlinear propagation of the DA-waves in an unmagne-tized nonplanar dusty plasma system containing positively and negatively charged dust fluid, Boltzmann electrons and ions. Thus, at equilibrium, we have що + Zpnpo = neо + Znnno, where ni0, np0, ne0, nn0 are, respectively ion, positive dust, electron, and negative dust number density at equilibrium, and Zp (Zn) represents the charge state of positive (negative) dust. The nonlinear dynamics of the DA-waves propagating in such a nonplanar dusty plasma is governed by

where v = 0 for ID planar geometry, and v = 1 (2) for a nonplanar cylindrical (spherical) geometry; np (n„) is the positive (negative) dust number density normalized by its equilibrium value npо (nnо); up («в) is the positive (negative) dust fluid speed normalized by Cd = (ZnkBTi/mn)1//2; ф is the electrostatic wave potential normalized by квТ^/е; p is the surface charge density normalized by Znenno; a = Ti/Te, a = Zpmn/Znmp, He = ne0/Znnn0, Hi = ni0/Znnn0, Hp = ZpfipQ f ZnrinQ = 1+Це —Hi, mn (nip) is the mass of the negative (positive) dust, T* (Te) is the ion (electron) temperature, кв is the Boltzmann constant, and e is the magnitude of the electron-charge. The time and space variables are in units of the negative dust plasma period ojpn = (mn/A-ne2Z^nno)1/2, and the Debye-radius Ad»« = (ZnkBTi/4Tre2Zlnno)1/2, respectively.

where e is a small parameter (0 < c < 1) measuring the weakness of the dispersion, and Vp (normalized by C<j) is the phase speed of the perturbation mode, and expand all the dependent variables (viz. nn, np, un, up, <j>, and p) in power series of e:

resents the linear dispersion relation for the DA-waves

Nonplanar double layers in plasmas with opposite polarity clust

propagating in a dusty plasma under consideration. To the next higher order in e, we obtain another set of equations, which, after using (15), (16), can be simplified as