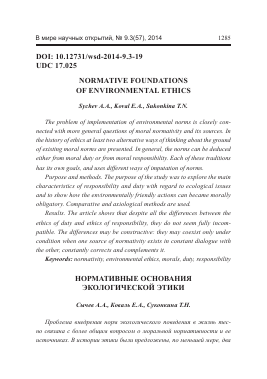 The problem of implementation of environmental norms is closely connected with more general questions of moral normativity and its sources. In the history of ethics at least two alternative ways of thinking about the ground of existing moral norms are presented. In general, the norms can be deduced either from moral duty or from moral responsibility. Each of these traditions has its own goals, and uses different ways of imputation of norms.

Purpose and methods. The purpose of the study was to explore the main characteristics of responsibility and duty with regard to ecological issues and to show how the environmentally friendly actions can became morally obligatory. Comparative and axiological methods are used.

Results. The article shows that despite all the differences between the ethics of duty and ethics of responsibility, they do not seem fully incompatible. The differences may be constructive: they may coexist only under condition when one source of normativity exists in constant dialogue with the other, constantly corrects and complements it.

Environmental crisis is more moral than scientific problem. Technology, economic, and ecology can only give the necessary resources and knowledge but they cannot make people to act responsibly. People will voluntarily comply with environmental laws, principles, regulations and prohibitions only if they are sure that they are legitimate and morally justified. Thus the problem of legitimization of environmental norms is closely connected with more general questions of moral normativity and its sources.

The purpose of the study is to explore the main characteristics of responsibility and duty with regard to ecological issues and to show how the environmentally friendly actions can became morally obligatory.

It is considered that they can be deduced either from moral duty or from moral responsibility. Duty is understood as a voluntary agreement with the moral demands of society, which is expressed in the recognition of their legitimacy and in the willingness to act in strict compliance with them. Such demands are applied to all the people on equal grounds, so that moral duty has no exceptions or preferences: it is always universal. In contrast to duty, responsibility is unique - it depends on the potential of the person, on the acts committed by her, etc. Each person (or even the same person in different periods of time) has her own sphere of responsibility. Only within this sphere she can be accused or credited and her actions can be evaluated as moral or immoral.

The most influential classical doctrine, considering duty as an immediate source of moral norms, is the deontology of Immanuel Kant. Duty here is extremely formalized and expressed in the form of the universal law that defines a common basis for every individual act. Following duty is a free choice of personality, committed solely out of respect for the moral law. "Yet this law is the only law which makes us conscious of the independence of our power of choice from determination by all other incentives (of our freedom), and thereby also of the accountability of all our actions" [4, p. 51].

ject, who is taken in a certain place and a certain historical time. The resulting ways of implementing the imperativty to the act depend on the circumstances in which the subject is situated: she is responsible only for those actions which are in her power and depend on her choice.

The use of deontological paradigm in relation to environmental ethics presupposes the recognition of environmental protection as an absolute moral duty of the humankind. The specific formulas of duty may vary depending on the position of the researcher, but in general all of them boil down to the necessity of protecting life and natural environment.

This imperative, according to Jonas, in the contemporary situation overrides the Kantian one, since the latter is possible only if Man and the humankind continue to exist. Human existence is not possible without the natural environment, that is why protection of nature takes the form of a universal moral demand.

There is a set of characteristics of the environment where serious changes are unacceptable. It means that some kinds of human activity which have negative impact on the environment should be strictly limited or at least controlled. In this connection Nikita Moiseev introduces the notion of "ecological imperative" which is understood as a set of rationally prescribed restrictions imposed on the forms of human activity, which can lead to environmental disaster. "We now know that there is some kind of 'forbidden limit' beyond which people may not go in any circumstances. Beyond it begin irreversible processes that will convert the biosphere to a new state in which there may be

no room for people. The risk of forfeiting the future is far too great to allow the human race to cross that boundary... This means that people's activity cannot follow the principle of laissez-faire: it must be subject to many prohibitions, most of which still have to be established. These prohibitions form the 'ecological imperative', one of the most important phenomena of modern times. Defining the conditions of the ecological imperative must be one of the main tasks of contemporary science" [8, p. 171].

Environmental imperative is objective as it is based on the correlation between certain properties of natural environment and social characteristics of humankind [14]. But the knowledge is an insufficient condition for action. Since the identification of limits and prohibitions does not lead to the solution of the problem, the process of nature protection must have a normative dimension, which means that the nature should be included into the sphere of moral responsibility.

Implementation of the ecological imperative to everyday life undoubtedly depends on the good will of each human being. Here science meets ethics and ecological imperative turns into the universal moral duty. It is the moral duty which sets the agenda of environmental activities and predetermines the sphere of concrete responsibility of each human being.

Imperatives are abstract: they dictate only general rules and it is not possible to define the specific responsibilities of different people out of them. That is why the moral duty should be operationalized. It means that we should determine specific moral principles corresponding to the common formulas of the moral duty. These principles should be evidence-based and scientifically proved so that all the rationally thinking people could agree to act in correspondence with them.

In the course of development of environmental ethics different moral principles are being formulated. The goal of all of them is to change the rela