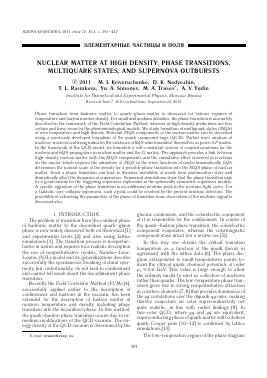 Phase transition from hadronic matter to quark—gluon matter is discussed for various regimes of temperature and baryon number density. For small and medium densities, the phase transition is accurately described in the framework of the Field Correlation Method, whereas at high density predictions are less certain and leave room for the phenomenological models. We study formation of multiquark states (MQS) at zero temperature and high density. Relevant MQS components of the nuclear matter can be described using a previously developed formalism of the quark compound bags (QCB). Partial-wave analysis of nucleon—nucleon scattering indicates the existence of 6QS which manifest themselves as poles of P matrix. In the framework of the QCB model, we formulate a self-consistent system of coupled equations for the nucleon and 6QS propagators in nuclear matter and the G matrix. The approach provides a link between high-density nuclear matter with the MQS components and the cumulative effect observed in reactions on the nuclei, which requires the admixture of MQS in the wave functions of nuclei kinematically. 6QS determines the natural scale of the density for a possible phase transition into the MQS phase of nuclear matter. Such a phase transition can lead to dynamic instability of newly born protoneutron stars and dramatically affect the dynamics of supernovae. Numerical simulations show that the phase transition may be a good remedy for the triggering supernova explosions in the spherically symmetric supernova models. A specific signature of the phase transition is an additional neutrino peak in the neutrino light curve. For a Galactic core-collapse supernova, such a peak could be resolved by the present neutrino detectors. The possibility of extracting the parameters of the phase of transition from observation of the neutrino signal is discussed also.

The problem of transition from the confined phase of hadronic matter to the deconfined quark—gluon phase is now widely discussed both on theoretical [1] and experimental levels [2] and also using lattice simulations [3]. The transition process is nonpertur-bative in nature and requires for a realistic description the use of nonperturbative models. Nambu—Jona-Lasinio (NJL) model and its generalizations describe successfully the spontaneous breaking of chiral symmetry but, unfortunately, do not lead to confinement and cannot tell much about the deconfinement phase transition.

Recently the Field Correlator Method (FCM) [4], successfully applied earlier to the description of confinement and hadrons in the vacuum, has been extended for the description of hadron matter at nonzero temperature and density including phase transition into the deconfined phase. In this method, the quark—hadron phase transition occurs due to inmedium modifications of the QCD vacuum. The energy density of the QCD vacuum is determined by the

In this way one obtains the critical transition temperature as a function of the quark flavors in agreement with the lattice data [6]. The phase diagram extrapolated to small temperatures points toward the critical quark chemical potentials of order Hc = 0.6 GeV. This value is large enough to allow the ordinary nuclei to exist as collection of nucleons rather than quarks. The low-temperature phase transition gives rise to strong nonperturbative attraction in colorless channels [7, 8] that provides dominance of the qq correlations over the diquark qq ones, making thereby conjecture on color superconductivity not quite realistic, in line with earlier findings [9]. In two-color QCD, where qq and qq are equivalent, superconducting phase of quark matter with colorless quark Cooper pairs [10—12] is confirmed by lattice simulations [13].

The low-temperature region of the phase diagram

is, however, less certain because no interaction in the hadron medium (nuclear matter) was taken into account yet. The standard models of nuclear matter (see, e.g., [14]) based on the realistic nucleon— nucleon (NN) potentials predict energy per nucleon E/A depending rather sensitively on details of NN interaction.

An additional uncertainty comes from the 3N forces and nucleon—hyperon transitions, which make computation of equation of state (EoS) of the nuclear matter a rather complicated task, which calls for experimental verification. At this point an important piece of information can be obtained from astrophysics.

During the last decade, great progress is made in observational astrophysics towards the study of properties of neutron stars (see, e.g., [15, 16] and, for a review, [17]). EoS of nuclear matter determined by the density dependence of E/A is important for calculation of structure and cooling rates of neutron stars and possible appearance of quark matter in interiors of neutron stars as was suggested for the first time by Ivanenko and Kurdgelaidze [18]. The current status of the quark stars hypothesis is discussed in [17, 19].

The recent interest to the nuclear matter EoS is also connected to new constraints obtained from the collective flow data and subthreshold kaon production in heavy-ion collisions [20, 21].

One of the main purposes of the present paper is to consider a generalized picture of NN interaction and of nuclear matter, which includes from the very beginning the quark degrees of freedom in the form of multiquark states (MQS). This implies a revision of the standard picture, based on the Yukawa mechanism of meson exchanges.

In 1935 Yukawa [22] proposed a hypothesis that the interaction between the nucleons may be due to the exchange of finite-mass meson. The experimental searches have led to the discovery of pions, heavier mesons, and eventually to the emergence of One Boson Exchange (OBE) model of NN interaction. In this model, pions are responsible for long-range part of the NN potential, while heavy mesons are responsible for the interaction at intermediate and short distances [23].

OBE models provide an accurate quantitative description of NN interaction. The physical meaning of the meson exchange at short distances is, however, not entirely clear because of the finite size of nucleons and mesons. The values of the proton and pion charge radii {rp;)1/2 = 0.875 ± 0.007 fm

between hadrons, where the quark—gluon degrees freedom come into play and affect the dynamics.

Restrictions of this kind should be taken into account when calculating EoS of nuclear matter. The maximum density of nuclear matter below which the OBE models can be applied is determined by comparing the proton charge radius with the average distance between the nucleon and its nearest neighbor. The nearest neighbor is localized between r and r + dr, while the sphere of radius r with the probing nucleon in the center is empty. The probability distribution of the nearest neighbor is the probability of not finding a nucleon inside the sphere multiplied by the probability of finding a nucleon in the volume element dV = 4^r2dr. The probability not to find a nucleon inside the sphere is given by the Poisson law P0 = exp(—pV), where p is nuclear matter density. For the saturation density p0 = 0.16 fm-3, a simple calculation gives {r) = 1.02 ± 0.37 fm, where {r) is the mean distance, the second number is the standard error. When the density is close to saturation density, OBE mechanism, obviously, cannot be applied.

The problem of nuclear matter EoS is studied in the realistic OBE models of NN interaction since the mid-1970's. One can distinguish three main approaches: A popular class of models based on the mean-field approximation [25, 26]. The field-theoretic Dirac—Brueckner—Hartree—Fock method goes beyond mean-field approximation (see [14] and references therein). Variational method is described in [27].

One should note that in all approaches of OBE type additional fine-tuning is required to obtain the realistic values of energies and densities, e.g., in the variational approach, 3N forces have to be added to the NN potentials.

OBE models are in reasonable agreement with laboratory data [20, 21], but predict a surprisingly low value of the maximum mass of neutron stars in the [ equilibrium, if one includes hyperons [28— 32]. [ Equilibrium leads to the occurrence of the hyperons when density increases to about (2—3)po and, consequently, leads to a softening of the nuclear matter EoS.

It has earlier been noted [33] that observational data on the rotation speed of X-ray transient XTE J1739-285, which point to a soft EoS, and mass of the pulsar PSR J1748-2021B, which points to a very stiff EoS, are almost mutually exclusive. In a recent study [34] data on compact sources 4U 1608-52, 1820-30 and 4U EXO 1745-248 were reanalyzed. The authors came to conclusion that only a very soft EoS is consistent with values of the mass and radius of the stars. A similar technique was used previously in the analysis of data from a

compact source EXO 0748-676. In conjunction with the analysis [16], one can assume the existence of two classes of compact stars, e.g., neutron stars metastable against conversion to exotic stars, such as quark stars, strange stars