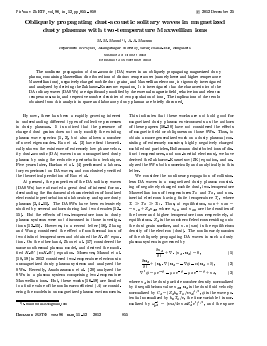 The nonlinear propagation of dust-acoustic (DA) waves in an obliquely propagating magnetized dusty plasma, containing Maxwellian distributed ions of distinct temperatures (namely lower and higher temperature Maxwellian ions), negatively charged mobile dust grains, and Maxwellian electrons, is rigorously investigated and analyzed by deriving the Zakharov-Kuznetsov equation. It is investigated that the characteristics of the DA solitary waves (DASWs) are significantly modified by the external magnetic field, relative ion and electron temperature-ratio, and respective number densities of two population of ions. The implications of the results obtained from this analysis in space and laboratory dusty plasmas are briefly discussed.

By now, there has been a rapidly growing interest in understanding different types of collective processes in dusty plasmas. It is noticed that the presence of charged dust grains does not only modify the existing plasma wave spectra [1, 2], but also allows a number of novel eigenmodes. Rao et al. [3] have first theoretically shown the existence of extremely low phase velocity dust-acoustic (DA) waves in an unmagnetized dusty plasma by using the reductive perturbation technique. Five years later, Barkan et al. [4] performed a laboratory experiment on DA waves, and conclusively verified the theoretical prediction of Rao et al.

At present, the properties of the DA solitary waves (DASWs) have attracted a great deal of interest for understanding the fundamental characteristics of localized electrostatic perturbations in laboratory and space dusty plasmas [3,4-11]. The DASWs have been extensively studied by several authors during last two decades [1215]. But the effects of two-temperature ions in dusty plasma systems were not discussed in those investigations [12-15]. However, in a recent letter [16], Zhang and Wang considered the effect of nonthermal ions of two distinct temperatures and obtained the K-dV equation. On the other hand, Zhou et al. [17] considered the same nonthermal plasma model, and derived the modified K-dV (mK-dV) equation. Moreover, Masud et al. [18, 19] in 2012 considered two-temperature electrons in unmagnetized dusty plasma systems and analyzed the SWs. Recently, Asaduzzaman et al. [20] analyzed the SWs in a plasma system comprising two-temperature Maxwellian ions. But, these works [16-19] are limited to a finite value of the nonlinear coefficient (A) or considering the models in unmagnetized plasma environments.

This indicates that these works are not hold good for magnetized dusty plasma environments as the authors of these papers [16-20] have not considered the effects of magnetic field or obliquness on those SWs. Thus, to obtain a more generalized work on a dusty plasma (consisting of extremely massive, highly negatively charged mobile dust particles, Boltzmann distributed ions of distinct temperatures, and non-inertial electrons), we have derived the Zakharov-Kuznetsov (ZK) equation, and analyzed the SWs both numerically and analytically in this letter.

We consider the nonlinear propagation of collision-less DA waves in a magnetized dusty plasma consisting of negatively charged mobile dust, two-temperature Maxwellian ions of temperatures Ta and Ti2, and non-inertial electrons having finite temperature Te, where Te » Ti2 » Tn. Thus, at equilibrium, nil0 + ni2o = = neo + Zdndo, where njio and «¿20 are the densities of the lower and higher temperature ions respectively, at equilibrium. Zd is the number of electrons residing onto the dust grain surface, and ne0 (nd0) is the equilibrium density of the electron (dust). The nonlinear dynamics of the obliquely propagating DA waves in such a dusty plasma system is governed by

To study small but finite amplitude electrostatic DASWs in the dusty plasma under consideration, one usually constructs a weakly nonlinear theory [21], and uses a scaling of the independent variables through the stretched coordinates [21, 22]

The perturbed quantities nd, udx, udy, udz, and 4> can be expanded along with their equilibrium values as [21,23-25]

Now, using (4)-(7) and (8)-(12) into (l)-(3), one can obtain the first order continuity equation, the z-component of the momentum equation, and Poisson's equation which, after simplification, yield

Equation (15) is the phase speed of the DA waves propagating in the magnetized dusty plasma under consideration.

The equations (16) and (17) respectively, represent the x- and y-components of the dust electric field drifts. These equations are also satisfied by the second order continuity equation.

one can eliminate obtain

Equation (21) is the ZK equation describing the nonlinear propagation of the obliquely propagating DA waves in a magnetized dusty plasma with two-temperature Maxwellian distributed ions. To study the properties of the SWs propagating in a direction making an angle 5 with the Z-axis, i.e. with the external magnetic field and lying in the (Z—X) plane, the coordinate axes (X, Z) are rotated through an angle 5, keeping the F-axis fixed. Thus, we transform our independent variables to

in which [To is a constant speed normalized by the positive DA speed (C<j). Using this transformation the ZK equation can be written in steady state form as

Fig. 1 represents the SW profiles for different values of the relative ion-number densities (¡-in), and