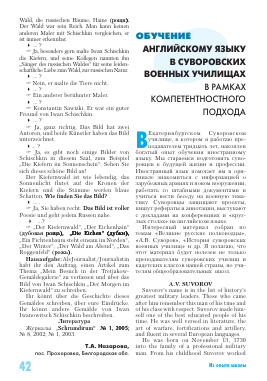 Suvorov's name is in the list of history's greatest military leaders. Those who came after him remember this man of his time and of his class with respect. Suvorov made himself one of the best educated people of his time. He was well versed in literature, the art of warfare, fortifications and artillery, and fluent in several European languages.

He was born on November 13, 1730 into the family of a professional military man. From his childhood Suvorov worked

hard to prepare himself for military service. In 1762 he was promoted to the rank of Colonel and appointed commander of the Astrakhan Regiment. He successfully directed operations against the Turks. The Russian troops under Suvorov's command won victory after victory. They surrounded and destroyed "Ismail" the strongest fortress on the Danube. Soon he was promoted to the rank of field-marshal for his military skill.

Suvorov used a concentration of forces in a decisive spot. He always acted suddenly and unexpectedly, and never lost a battle. His strategic and tactical innovation could be successful only if the troops were trained accordingly. His motto - "hard in training, easy in battle" - has become the rule for combat training. After the war Suvorov wrote his splendid book "The Science of Victory", in which he gave the main principles of troop training. Contemporaries had a high opinion of his famous "The Science of Victory". Many of his proverbs have enriched the Russian language, and are still used today.

The Russian soldiers under Suvorov's command displayed courage in the battles with the armies of French generals Macdonald and Joubert. Suvorov's Swiss Campaign was the triumph of Russian Army and Suvorov's Military Strategy. Suvorov received the title of Generalissimo. He died in St. Petersburg at the age of 70.

In honor of the brilliant military leader the Government established the order of Suvorov. During the Great Patriotic War special schools were established. Future officers study and receive education here. These schools were named after Suvorov: the Suvorov Military Schools.

Mikhail Kutuzov, the Russian Field-Marshal, who led the Russian army to victory in the war of 1812, was born on September 16, 1745 in Petersburg. His father served in the army under Peter I. When Mikhail grew up, his father sent him to the Petersburg Military Engineering and Artillery School. Young Michail Kutuzov very soon distinguished himself among his classmates. He studied very well and quickly mastered the arts of engineering and

artillery. He liked history, literature and studied French, German, English and other languages. In 1761 Mikhail Kutuzov graduated from the Military School with the rank of lieutenant.

Young Kutuzov joined the Astrakhan regiment and served under the command of Colonel (later, Field-Marshal) Suvorov, and was appointed commander of a company. He took part in many battles. In 1770, Kutuzov fought the Turks on the Danube. Later he fought the Tatars in the Crimea, where he nearly lost his life as he was badly wounded. When he recovered, he went abroad for medical treatment. When returned to Russia, he served under Suvorov again, this time for six years. During this time Kutuzov mastered Suvorov's "Science of Victory". Under Suvorov's command the Russian Army became the best in Europe. At that time Kutuzov was promoted to the rank of Major-General.

In 1788 war again broke out with Turkey. Kutuzov's Corps took an active part in the war. Kutuzov participated in the capture of the Fort Ismail. After the battle at the approaches to Ismail, Suvorov wrote about Kutuzov: "Though Kutuzov fought on the left flank, he was my right-hand man."

On June 22, 1812, Napoleon, without declaring war, ordered his army of 600,000 men to attack Russia. With the help of all the people of Russia who took up arms to defend their country, the Russian Army under Kutuzov's command defeated the enemy.

The Russian people will always remember the great Field-Marshal, who was a true patriot of his country.

Georgy Konstantinovich Zhukov, one of the outstanding Russian military commanders, Marshal of the Soviet Union was born on the 19th of November 1896 into a poor peasant family in the village of Strelkovka, Kaluga Region. Though poor, his parents managed to give their son an education. He began to work when he was still a boy. He worked in the fields of the village taking part in haymaking. In autumn 1903 he entered a 3 year course at church school, where he studied successfully and he left in 1906 with a certificate of merit.

At the end of July 1915 he was called up for military service. It was World War I that made it possible for him to develop his remarkable talents.

In February 1918 G.K. Zhukov fell seriously ill with typhus and only in August 1918 after his serious illness he continued his service in the Soviet Army in the Fourth Cavalry Regiment of the 1st Moscow Cavalry Division.

On March 1st, 1919 he joined the Bolshevik Party. From 1922 to 1923 he served with the rank of the commander of the cavalry troops in Samara and then he was appointed the commander of the Buruluk Cavalry Regiment, and in 1929 he was sent to Moscow to study in the higher military courses. He revealed his outstanding abilities as a skilled commander.

He died on the 18th of June 1974. The name of Zhukov, Marshal of the Soviet Union, an outstanding Soviet military commander, brave soldier and devoted son of his country, lives in the hearts of our people. There are monuments to Zhukov in Moscow and Ekaterinburg.

Suvorov Military Schools were founded during the Great Patriotic War. They were named after Alexander Vasilyevich Suvorov, one of the most outstanding military leaders of Russia.

Our Suvorov Military School (SMS) was founded on the nineteenth of December 1943 in Yeletz. Since 1947 it has been situated in Ekaterinburg in Kirov Square on Pervomaiskaya Street and is named the Ekaterinburg SMS. There is a monument to the two time hero of the Soviet Union Odintsov in front of the building of our

school. During the Great Patriotic War he was a pilot. Now his rank is a colonel-general.

There are four floors in our military school. On the ground floor we can see: a mess, two gyms, a hospital, an officer of the day room, a logistical department, and history and geography classrooms. On the first floor we have the school commander's study, a study department, a personnel department, and literature studies. We have a reading hall and a library on the second floor. We study physics and foreign languages on this floor. There are computer and chemistry labs, biology and mathematics classrooms on the third floor. Cadets also study different military subjects.

We prepare ourselves for the lessons in the platoon classrooms. Cadets take part in sports in