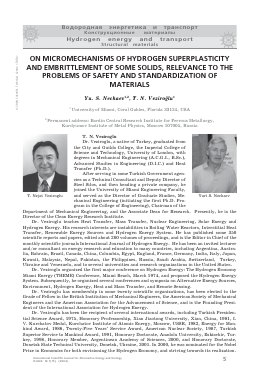 ON MICROMECHANISMS OF HYDROGEN SUPERPLASTICITY AND EMBRITTLEMENT OF SOME SOLIDS, RELEVANCE TO THE PROBLEMS OF SAFETY AND STANDARDIZATION OF

Dr. Veziroglu, a native of Turkey, graduated from the City and Guilds College, the Imperial College of Science and Technology, University of London, with degrees in Mechanical Engineering (A.C.G.I., B.Sc.), Advanced Studies in Engineering (D.I.C.) and Heat Transfer (Ph.D.).

Dr. Veziroglu has membership in some twenty scientific organizations, has been elected to the Grade of Fellow in the British Institution of Mechanical Engineers, the American Society of Mechanical Engineers and the American Association for the Advancement of Science, and is the Founding President of the International Association for Hydrogen Energy.

From 1962 till 1968 he worked (as a researcher) in the All-Union Research Institute of Aviation Materials. In 1968 he defended the Ph.D. thesis on "Elaboration of the Method and Studying of the Relaxation Properties of Vacancies in Metals".

From 1968 till 1989 he worked in the Moscow Steel & Alloys Institute (Technical University) as an associate professor of the Physical Chemistry Department. In 1975-1976 he had perfomed 10 months' researches of lattice defects in metals at Kyoto University, Japan (in Laboratory of Prof. J.-I. Takamu-ra). In 1982 he defended the Dr.Sc. thesis on the topic "Stable Segregation Phases at Dislocations and Their Influence on Diffusion Processes in Aluminum Alloys". In 1984-1987 he worked as an associate professor of the Physics Department in the Addis-Ababa University (Ethiopia).

From 1989 till 1992 he worked as a Head of the Materials Science & Metal Physics Department in the Karaganda Metallurgical Institute (Technical University), Kazakhstan, and from 1992 till 1995 — as a full professor of the Department.

From 1993 till 1996 he worked (in parallel) in the Moscow Institute of Electronics & Mathematics (Technical University) as a chief researcher, professor of the Materials Science Department.

I.S. Netchaev has had more than 100 scientific publications; he has participated in many International Research Conferences, particularly, as an invited lecturer. In 1995 he was elected to Membership in the New-York Academy of Sciences (USA), ID member # 409313-2.

As has been formulated in Report [1] of the Basic Energy Sciences Workshop of the U.S. Department of Energy (DoE), May 13-15, 2003, on Hydrogen Production, Storage and Use, in chapter Safety in Hydrogen Economy (p. 126-127), corrosion and hydrogen embrittlement of materials are closely connected to details of their microstructure, and, in particular, to the segregation and diffusion processes that occur at internal interfaces and associated defects, such as dislocations; micromechanisms of such processes are not well understood. As has been also noted [1] in Potential Impacts (p. 127), fundamental knowledge of hydrogen embrittlement of metals and welded joints would enable the setting of standards for the materials used in building a hydrogen infrastructure. As has been noted [1] in chapter Basic Research Challenges for Hydrogen Storage (in item Safety, p. 49), fundamental research will be needed to understand materials' hydrogen degradation and failure processes to allow design of improved materials for hydrogen storage. Hence, Research Directions have been formulated by the U.S. DoE as: Understanding of the Basic Physics of Hydrogen Transport in Metals and Hydrogen-assisted Damage Mechanisms.

Some fundamental problems of these research directions and their solution ways are considered in the present contribution.

Fundamental Problems (A, B)

(IIA, B) The second problem (related with IA) is revealing micromechanisms of the high pressure hydrogen influence on plasticity, strength, cyclic fatigue, friction and wear of steels and other industrial alloys used in hydrogen power (the known experimental and technological data (1985-2003), [3]).

(IIIA) The third problem (also related with IA) is revealing physics (micromechanisms) of the hydrogen plastification and hydrogen superplas-ticity of titanium and titanium-based industrial alloys (the known experimental and technological data (1985-2003), [4]).

(IVB) On the other hand, the urgent problems are of physics (micromechanisms) of different hydrogen degradation, embrittlement, cracking and blistering of metals and industrial alloys (the experimental and technological data (1970-2003), [3-5]).

Solution Ways of Problems (A)

The most data of Problems IA, IIA, IIIA can be interpreted on the basis of the use of challenging results [6-10], including a model of a periodic melting-like transition at grain boundary nan-oregions (GBNR) under their "bombarding" by moving dislocations with hydrogen segregation "nanoatmospheres" and by deformation vacancies and complexes of vacancies with hydrogen atoms [11-21]. It is related to a periodic vacancy-hydro-

Solution Ways of Problems (B)

The most data of Problems IIB, IVB can be interpreted on the basis of the use of challenging results [11-27]; some of them are the following.

Firstly [15, 20], on the basis of analysis of the experimental data on apparent solubility and diffusivity of hydrogen in electrolyticallly charged maraging steel and iron-Armco, the hydrogen fugacity (pressure) of molecular hydrogen in metallic materials (under hydrogen charging) has been evaluated as ~102-103 bar, for typical current densities of 10-100 A/m2. The hydrogen fugacity of the same order of magnitude has been also estimated by using the deformation-mechanism maps with respect to the experimental data on blistering and cracking of low alloyed steel (under electrolytic hydrogen charging). It is consistent with the recent results on high pressure hydrogen generation by PEM electrolysis [28] and electrolytic production of ultra-high pressure hydrogen fuel without a compressor [29]. It can be used for experimental studies (modeling) of hydrogen permeability and hydrogen-assisted damage processes, w