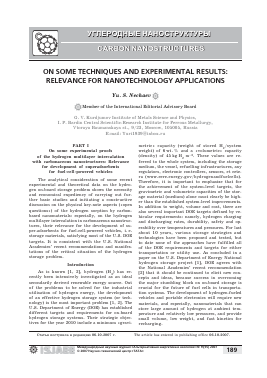 ON SOME TECHNIQUES AND EXPERIMENTAL RESULTS: RELEVANCE FOR NANOTECHNOLOGY APPLICATIONS

Member of the International Editorial Advisory Board

PART I On some experimental proofs of the hydrogen multilayer intercalation with carbonaceous nanostructures: Relevance for development of superadsorbents for fuel-cell-powered vehicles

The analytical consideration of some recent experimental and theoretical data on the hydrogen on-board storage problem shows the necessity and economical expediency of carrying out further basic studies and initiating a constructive discussion on the physical key-note aspects («open questions») of the hydrogen sorption by carbon-based nanomaterials: especially, on the hydrogen multilayer intercalation in carbonaceous nanostruc-tures, their relevance for the development of super-adsorbents for fuel-cell-powered vehicles, i. e. storage materials, satisfying most of the U.S. DOE targets. It is consistent with the U.S. National Academies' recent recommendations and manifestations of the critical situation of the hydrogen storage problem.

As is known [1, 2], hydrogen (H2) has recently been intensively investigated as an ideal secondarily derived renewable energy source. Out of the problems to be solved for the industrial utilisation of hydrogen energy, the development of an effective hydrogen storage system (or technology) is the most important problem [1, 2]. The U.S. Department of Energy (DOE) has established different targets and requirements for on-board hydrogen storage systems. Their strategic objectives for the year 2010 include a minimum «gravi-

metric» capacity (weight of stored H2/system weight) of 6 wt. % and a «volumetric» capacity (density) of 45kgH2 m-3. These values are referred to the whole system, including the storage medium, the vessel, refuelling infrastructures, any regulators, electronic controllers, sensors, et cetera (www.eere.energy.gov/hydrogenandfuelcells). Therefore, it is important to emphasize that for the achievement of the system-level targets, the gravimetric and volumetric capacities of the storage material (medium) alone must clearly be higher than the established system-level improvements. In addition to weight, volume and cost, there are also several important DOE targets defined by vehicular requirements: namely, hydrogen charging and discharging rates, durability, safety and op-erability over temperatures and pressures. For last about 10 years, various storage strategies and technologies have been proposed and tested, but to date none of the approaches have fulfilled all of the DOE requirements and targets for either transportation or utility use. As concluded in a paper on the U.S. Department of Energy National hydrogen storage project [1], DOE agrees with the National Academies' recent recommendation [2] that it should be continued to elicit new concepts and ideas, because success in overcoming the major stumbling block on on-board storage is crucial for the future of fuel cells in transportation systems. The development of hydrogen-fueled vehicles and portable electronics will require new materials, and especially, nanomaterials that can store large amount of hydrogen at ambient temperature and relatively low pressures, and provide small volume, low weight, and fast kinetics for recharging.

For last about 10 years, graphite, carbon na-notubes, and nanofibers have been both theoretically and experimentally investigated as potential adsorbent structures (cf. reviews in [3, 4]). Even though some reports claim very high storage capacity, such findings have not been supported by the majority of investigators. Recently, however, hydrogen storage in nanostructured carbon has attracted renewed interest because of new developments in nanotechnology research, and the significant advantage of this light weight and reasonably inexpensive material.

Herein, some analytical study results are presented on the hydrogen multilayer intercalation with carbonaceous nanostructures and their relevance for the development of super-adsorbents for fuel-cell-powered vehicles, i. e. storage materials satisfying most of the DOE targets.

1.1. On the specific intercalation of atomic hydrogen into graphene layers

A real possibility of hydrogen intercalation into (between) near-surface graphene layers of highly oriented pyrolytical graphite (HOPG) has been shown in a series of experimental studies [5-8]. Study [5] of atomic hydrogen accumulation in HOPG samples and etching their surface on hydrogen thermal desorption (TD) have been performed using scanning tunneling microscope (STM) and

atomic force microscope (AFM). The surface morphology of untreated reference HOPG samples revealed by STM was found atomically flat (Fig. 1a), with a typical periodic structure of graphite (Fig. 1b). Exposure (treatment) of the reference HOPG samples (30-125 min at the pressure of about 1 Pa and near-room temperature) to different atomic hydrogen doses (D) has drastically changed the initially flat HOPG surface into a rough surface, covered with bumps-blisters (Fig. 1c), with the average height (for the shown case) of about 4 nm (Fig. 1d).

On TD heating the HOPG samples (under mass spectrometer control), desorption of hydrogen was found (Fig. 2a). As is shown in Fig. 2a, the des-orbed hydrogen amounts (Q) increase with increase of the total hydrogen dozes (D) to which HOPG samples were exposed; percentage of D which retained in samples (Q) goes on decreasing towards a saturation stage. After TD, the HOPG surface there was no bumps anymore, rather the graphite surface was atomically flat, and it was covered with some etch-pits of nearly circular shapes (Fig. 2b), and (as was also shown) of monolayer (or sometimes, two layers) depth. This implies that after departure of captured hydrogen gas, the bumps-blisters became empty of hydrogen and HOPG surface restores back flat surface morphology under action of Van der Waals forces [5]. It was also found [5] that bumps-blisters on HOPG surface containing hydrogen gas were removed after 12-14 times of successive STM scanning (in ambient), leaving behind flat graphite surface with smaller (in comparison with the TD case) irregular etch-pits of monolayer (or sometimes, two layers) depth over there. It's supposed [5] that during successive STM scanning process, holes (in some bumps) created by STM tip becomes bigger when hydrogen gas escapes through them, because some of the carbon atoms from holes edges accompany the hydrogen gas, contributing to bigger sizes of the holes (etch-pits). These results are consistent with results [9] on the «protuberances» disappearance under successive STM scanning of a graphite (HOPG) surface exposed to atomic hydrogen. It is also supposed in [5] that during TD process there is formation of small amount of hydrocarbons and their release together with hydrogen accounts for bigger sized etch-pits of nearly circular shapes.

These and some other observations of net flat HOPG surface in the TD and successive STM scanning cases made the author of [5] to construct a model as shown in Fig. 3. According to this mod-

el, bumps found on HOPG surface after atomic hydrogen exposure (Fig. 1c) are simply graphite blisters, containing inside hydrogen gas in molecular form. As is supposed, atomic hydrogen intercalates in between layers in graphite net through holes in graphene hexagons (due to a small diameter of atomic hydrogen in comparison with the hole size) and latter on being converted to H2 gas form makes it captured inside graphene blisters (due to a relatively large kinetic diameter of hydrogen molecules). But on heating (TD process), some blisters are broken (punctured) due to rise of pressure, up to the tensile limit (strength) for graphite layer forming blister [5]. The number of etch-pits after TD (Fig. 2b)) is considerably smaller than the number of previously existing blisters (Fig. 1c), showing that each blister was not broken to leave behind an etch-pit, and that it took place (during TD heating) some blisters merging and/or coalescence.

~ k(QSb )/Vb ~ 2.5 107 Pa, the estimated accuracy is not higher than the order of magnitude. During TD heating, for instance, at 1000 K the pressure can reach a value of PH2 ~ 8.5107Pa (within the ideal gas approximation), which can be enough for some blisters to get punctured (or tensile ruptured), maybe due to some defects in their roofs (walls). In paper [5] the estimated quantities (pressures) are put lower by one order of magnitude (probably, it's a slip of the