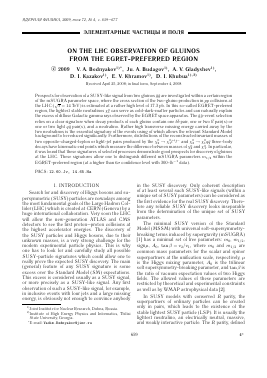 on the lhc observation of gluinos from the egret-preferred region

Prospects for observation of a SUSY-like signal from two gluinos gg are investigated within a certain region of the mSUGRA parameter space, where the cross section of the two-gluino production in pp collisions at the LHC (л/s = 14 TeV) is estimated at a rather high level of 17.3 pb. In this so-called EGRET-preferred region, the lightest stable neutralinos x? can serve as cold-dark-matter particles and can naturally explain the excess of diffuse Galactic gamma rays observed by the EGRET space apparatus. The gg-event selection relies on a clear signature when decay products of each gluino contain one 66 pair, one or two ll pair(s) or one or two light qq pair(s), and a neutralino. Rather high transverse missing energy carried away by the two neutralinos is the essential signature of the events using of which allows the relevant Standard Model background to be reduced significantly. Furthermore, distributions of the reconstructed invariant masses of two opposite-charged-lepton or light-jet pairs produced by the x0 ^ X01+1- and x2 ^ xlqq three-body decays have kinematic end points which measure the difference between masses of x2 and x?. In particular, it was found that these signatures of selected processes demonstrate good prospects for discovery of gluinos at the LHC. These signatures allow one to distinguish different mSUGRA parameters m?j2 within the EGRET-preferred region (at a higher than 6a confidence level with 300-fb-1 data).

Search for and discovery of Higgs bosons and su-persymmetric (SUSY) particles are nowadays among the most fundamental goals of the Large Hadron Collider (LHC) which is created at CERN (Geneva) by a huge international collaboration. Very soon the LHC will allow the new-generation ATLAS and CMS detectors to see the first proton—proton collisions at the highest accelerator energies. The discovery of the SUSY particles and Higgs bosons, due to their unknown masses, is a very strong challenge for the modern experimental particle physics. This is why one has to look for and carefully study all possible SUSY-particle signatures which could allow one to really prove the expected SUSY discovery. The main (general) feature of any SUSY signature is some excess over the Standard Model (SM) expectations. This excess is considered usually as a SUSY signal, or more precisely as a SUSY-like signal. Any first observation of such a SUSY-like signal, for example, in inclusive events with four jets and a large missing energy, is obviously not enough to convince anybody

The minimal SUSY version of the Standard Model (MSSM) with universal soft-supersymmetry-breaking terms induced by supergravity (mSUGRA) [1] has a minimal set of free parameters: m0, mi/2, sign^, A0, tan /3 = v2/v\, where m0 and m^ are common mass parameters for the scalar and spinor superpartners at the unification scale, respectively, ^ is the Higgs mixing parameter, Ao is the trilinear soft supersymmetry-breaking parameter, and tan 3 is the ratio of vacuum expectation values of two Higgs fields. The allowed values of these parameters are restricted by theoretical and experimental constraints as well as by WMAP astrophysical data [2].

In SUSY models with conserved R parity, the superpartners of ordinary particles can be created only in pairs, which leads to the existence of the stable lightest SUSY particle (LSP). It is usually the lightest neutralino, an electrically neutral, massive, and weakly interactive particle. The R parity, defined

Fig. 1. The mSUGRA rao-mi/2 parameter space (left panel). Light curve in the middle corresponds to the region consistent with the WMAP data. The EGRET-preferred region is marked with 5 (it is also given in right panel). The other benchmark regions of mSUGRA are labeled with 1, 2, 3, and 4. The light shaded area (right panel) is the enlarged region preferred by EGRET data for tan3 = 50, n> 0, and A0 = 0. The excluded regions are indicated by the dots.

as R = (-i)2S+3B+L, is a discrete multiplicative symmetry, where S is the particle spin, B is the baryon number, and L is the lepton number. All SM particles have R = 1, while all superpartners have R = —1, so a single SUSY particle cannot decay into just SM particles if R parity is conserved. Viable candidates are the lightest neutralino, the lightest sneutrino, or alternatively the gravitino. Since the LSP can carry away energy without interacting in a detector, the apparent violation of momentum conservation is an important part of SUSY phenomenology. Also, when R parity is conserved, superpartners must be produced in pairs from a SM initial state. Breaking of the R-parity symmetry would result in lepton-and/or baryon-number-violating processes. In the mSUGRA the masses of the superpartners at some energy scale can be calculated by solving renormal-ization group equations with the parameters mentioned above being initial conditions at the unification scale.

At the LHC the expected phenomenology of mSUGRA, or any other SUSY model, is rather rich and strongly depends on the concrete set of the mSUGRA parameters. It was not clear which set of these parameter should be chosen in advance for Monte Carlo (MC) investigation of all potentially expected SUSY observables at the LHC. To this end, the so-called benchmark mSUGRA points were proposed [3]. These characteristic mSUGRA points satisfy the experimental constrains from accelerator nonobservation of SUSY particles, rare decays, and dark-matter relic density requirements. From the practical point of view the set of these benchmark points allows one to have all specific peculiarities of SUSY-like observables under control. To this end, for

Here, the LSP properties are consistent with the observed relic density, i.e., the LSP can serve as a cold-dark-matter particle. All other constraints relevant to any mSUGRA benchmark point [3] are also satisfied. In the EGRET-preferred region the LSP can naturally explain the excess of diffuse Galactic gamma rays observed by the EGRET [6]. Furthermore, this LSP mass fits the DAMA annual modulation evidence for the direct dark-matter detection [7, 8]. A typical set of the EGRET-preferred region (EGRET-point) parameters is the following:

It appears to be very interesting phenomenologically, because of the mass splitting between the lightmass weak-interacting gauginos and the heavy-mass sleptons and strongly interacting squarks. The cross sections for the chargino and neutralino production at the LHC are rather large and are comparable with the cross sections of the squark and gluino production. The latter, though enhanced by the strong interaction, remains suppressed by the heavy masses of the squarks. Therefore in the EGRET-preferred region the leptonic processes with neutralinos and charginos are not suppressed and might give a clear leptonic signature for the SUSY in the coming LHC experiments [9]. Furthermore, detection of SUSY-like signals which correspond to the EGRET-preferred

point would be a strong indication both for the supersymmetry and for solution of the dark-matter problem. In fact, the EGRET-preferred point has a big advantage against any other SUSY benchmark points. At this point particle physics and astrophysics are strongly connected. If the LHC experiments reject the EGRET-preferred point, then one should look for another, new, explanation of the diffuse-gamma-ray excess measured by the EGRET apparatus. If the LHC measurements confirm it, then one simultaneously solves the SUSY and the dark-matter problems. None of the benchmark SUSY points which are currently under investigation [4] has such crucial consequences.

Parameters (1) were used as input for the ISAJET code [10] which calculated the superparticle spectrum in the EGRET-preferred region (see Table 1).

Afterwards, this mass spectrum was used by the PYTHIA generator [11] for the event generation. The superparticle mass spectrum and the cross sections of different SUSY processes depend on the chosen parameters of mSUGRA. The common property of the expected SUSY-like processes with conserved R parity is undetectable LSP(s) in the final state. These LSPs are rather heavy and thus take away quite large (and undetectable) transverse momentum. The condition for choosing a certain SUSY process